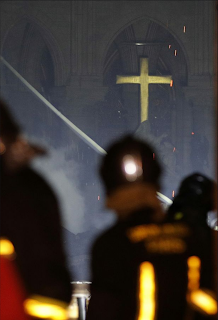 Houellebecq is back at it, this time at First Things, talking about religion, particularly Catholicism. I thought this was very good:


And the Church seems to apologize for her existence. Currently in France, we are experiencing a vast insurrection by those who could be termed the “leftovers of globalization,” the gilets jaunes. These people are crying out with an anger that has been growing for a long time, and they have been ­supported by a majority of the population. A social phenomenon of this order cannot escape the notice of any institution claiming to have a plan for men. In lieu of exercising a political influence, the Church could be offering a spiritual plan to those who are fighting against a loss of fundamental meaning. There are approximatively a hundred dioceses in France, and a few more bishops, all of whom are the representatives of the Church in the country. Only one of them has decided it would be a good idea to go to a meeting of the gilets jaunes.

From Restoration, over at First Things.
Posted by The Social Pathologist at 11:33 pm 4 comments: