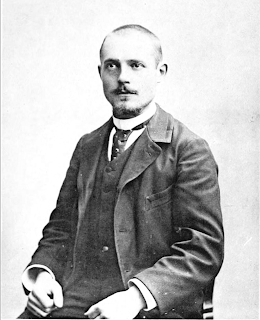 One of the unexpected consequences of revisiting the life of Charles de Gaulle was a deeper appreciation of man who I frequently ran into while delving into the history books but really didn't understand: Charles Peguy.

De Gaulle had stated on several occasion that Peguy was--after his father--the greatest influence on his life and an author "who mattered to him immensely".  Which is interesting because most English biographies of de Gaulle scarcely mention him. Yet to know Peguy is understand a lot about de Gaulle and Gaullism. Julian Jackson, in his five best books on Charles de Gaulle states:

....De Gaulle has a phrase in his war memoirs on the first page where he talks about how for him “France is like a princess in a fairy story, Madonna in a fresco”. That could come straight out of Péguy. Péguy is offering this extraordinary, overarching synthesis of the unity of France, that French history is a continuum and a whole.

De Gaulle once remarked that "he thought and felt exactly as I did'.

Which is odd because the circumstances of both were wildly different and on superficial appearances there was little to suggest a shared affinity. Contrary to De Gaulle's bourgeois upbringing,  Peguy grew up poor. His father died while Peguy was a child, from wounds sustained in the Franco-Prussian war. His mother, a chair-maker, worked long hours to support the poor family.  However Peguy was precocious, and his intellectual ability was recognised by the local schoolmaster, and the republican educational system, recognising his talents, propelled him from provincial Orleans to the to the École Normale Supérieure in Paris.  Dropping his childhood Catholicism for Socialism, he became a student activist and soon became embroiled in the Dreyfus affair, literally fighting in the streets of Paris against those who were convinced Dreyfus was guilty. He never graduated from university, instead became an "essayist", earning a meager income from his journal Cahiers de la Quinzane. Rediscovering his Catholicism in the aftermath of the Dreyfus affair he railed against modernity and became "mystical", writing several poems which, while earning him acclaim, earned him little money. A reserve army officer, he was killed leading his troops on the eve of the Battle of the Marne.

So why is he important.

Well, apart from the political legacy he left through his influence of the politics of de Gaulle, he had an indirect influence on the trajectory of Catholicism in the 20th C. Peguy recognised that modernity was changing the world in a way that it had never experienced before and he also recognised that the Christian religion was in deep trouble. A founding, if not principle member, of the ressourcement movement--he coined the term--he excoriated the clergy whom he felt had corrupted the Christian religion and turned men away from God. A man of fierce integrity, his relationship was the Church was highly irregular as he was married to secular woman who refused to baptise their children (he would not so without her agreement) and was thus denied the sacraments.

Interestingly, the young assistant who worked with him in the store in which he published his journal was Jacques Maritain. Peguy set into motion a series of events which caused Maritain to return to the faith. Maritain, in turn, mentored many who become influential in the Nouvelle theology movement which reshaped Catholicism in the 20th C.

Peguy was a fulcrum upon which a lot moved.

Peguy approached religion as poet and not as a theologian, in that his faith was in his heart and not a product of his head. But it would be wrong to say that he "intuited" this rather he seemed to have "sensed"--I'm being specific about the terminology--it in a profound manner. And what he sensed was that the clerical led faith had become detached from the source of it, and he felt that this was the cause of Christianity's atrophy. But it wasn't just this disconnection between the source of the faith and the practice of religon, Peguy also felt that Christianity, particularly in its Jansenist and ascetic elements, had deformed Christianity. There has been perhaps no other Christian that so emphasised the goodness of the carnal world. His was not a Christian spirituality rather it was a word made flesh.  Peguy was big on the goodness of creation and the body.

So why isn't he well known?

As I see it, there were two major problems with Christianity at the dawn of the 20th C. Firstly, there was the source/theology detachment problem which was recognised by a few, but there was also the problem of the  "buddhisation" of Christianity which is hardly recognised even today. At the dawn of the Nouvelle Theology movement there could be said to be two branches, the "traditionalists" and "Peguy". And since Peguy was problematic and died early, the "traditionalist" i.e. Buddhist branch assumed dominance. Peguy's nouvelle theology was a road not traveled.

As said before, Peguy was a probelmatic Christian. For example,  he was fiercely nationalistic which he said was fueled by his Christian faith.  He loathed pacifism and preferred a just war to an unjust peace. He was not a militarist but saw in the profession of arms a shield against the wickedness of malign powers. For Peguy, Christian soldiers provided the space in which the faith could grow unmolested and there was a holy dimension to their profession provided they acted justly and honorably.

"Blessed are those who died for carnal earth

Provided it was in a just war.

Blessed are those who died for a plot of ground.

Blessed are those who died a solemn death."

He literally street-brawled for justice. He preferred to put the hurt on evil rather than suffer it.  His notion of carnality, meant that identity was not an idea but a something rooted in reality. For example, France was not an "idea" but it was carnal thing and to be French, as opposed to a French citizen, were two separate things. He thought that some of the poor, in their attitude to work had become too "bourgeois." He also felt that Jesus wasn't in competition with our identities. We did not all have to become "mini Jesuses" rather we should be the christian version of ourselves.

His was a loving assertive Christianity, there was no kumbayah in him. And his assertive Christianity put him against the "traditional" ascetic "Buddhist" Christianity which assumed prominence in both the traditional and liberal strains of Christianity. He was a Christian knight who did not find an audience among pacifist monks and therefore he is forgotten. When he is mentioned, he is remembered for his "acceptable" points; his piety, his concern for the poor, his religious poetry. They gloss over the disagreeable stuff.

But the question to ask here is who is the more orthodox Christian, the pacifist monk or Peguy? And here a thought experiment is in order: Joseph Ratzinger is probably the deepest, most orthodox of the Nouvelle Theologians. Now could you imagine, even in his young adulthood, the young Ratzinger making a whip out of cords and chasing the money lenders out of the temple, but anyone given a familiarity of Peguy's life could not only imagine it, but could also see Peguy giving a "few extra" for good measure.

Which one better imitates Christ?

Posted by The Social Pathologist at 11:39 pm 22 comments: