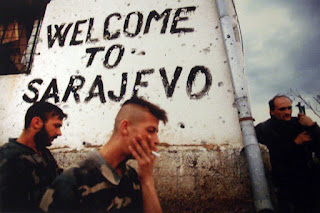 My opposition to Mr Trifkovic does not stem from his "Serbian-ness", rather, my opposition to him is more ideological, resting on a difference in opinion in his conception of "Conservativeness" and mine. At stake here is not an issue of Croatia vs Serbia, rather my version of Conservatism and his, and our opposition reflects what I consider a major problem in conservatism; who is in or out of the fold?

It is my opinion that Conservatism primarily is a philosophy that orientates itself around the "truth of things." The conservative therefore lives his life according to the truth, by the truth and for truth. As the Master said, "Ye shall know the truth, and the truth shall set ye free", and the commandment, "Do not bear false witness", attest to the importance of truth in Christian thought. Our criticism of our liberal opponents ultimately boils down to their ignorance or denial of some aspect of the truth.

If we use "the primacy of the truth" as the definition of Conservatism, we approach the liberal-Conservative divide from a totally different perspective. Instead of seeing the Left as permissive and the Right as strict,  we can recategorise the Left-Right divide as being being a divide between those that are right and those that are wrong. It also lets us recognise that there can be both authoritarian and liberal wrongness. Stalin, Hitler and Noam Choamsky thus are easy to catergorise as being anti-conservative even though they sit poles apart on the authoritarian spectrum. The premises from which their respective philosophies arise are wrong with regard to the reality of the human condition.

Intelligent modern Christian Conservatism takes the tenets of Christianity as being true as well as the direct observations of the senses. Therefore Christian Conservatism has to exclude those people who deny Christianity in practice and those who misrepresent the nature of reality. Walter Duranty is outside the Christian fold as he deliberately misstated reality. So has Srdja Trifkovic. Not only with regard to his statements with regards to the nature of events during the Bosnian War, but also with regard to regime he allied himself with during it.

People have accused me of being either willfully or unwittingly biased against Mr Trifkovic because of his background. Personally, I find that offensive, not only because it makes gratuitous assumptions with regard to the nature of my character, but because it implies that no man can actually know the truth, all he can know is his version of it. Of course, this is straight out of the post-modernist philosophical playbook and is ultimately a denial of any sort of objective reality. In practice however, most people don't believe that.  Most people would hold that an intelligent English, American or Frenchman could discuss the dispassionately the events in Nazi Germany without prejudice. However when it comes to the events that have happened in Eastern Europe, particularly concerning the former Yugoslavia, there is an impression that people there just can't do the same. It a subtle form of condescension.

Still, some people have tried to look at the events dispassionately, even people from the region of the former Yugoslavia, in order to determine what actually did happen. Charles Ingrao, a American Historian from Purdue University,  set up the Scholars Initiative in order to determine what actually happened during the break up of Yugoslavia.  He describes how the study was organised and how it began with the approval of the Serbian Academy of Sciences. Over two hundred historians from different nationalities opted to join. The historians were then divided into eleven teams with the purpose of answering certain questions with regard to the breakup of Yugoslavia.


Given the overriding need to establish the project’s credibility throughout the former Yugoslavia, each of the eleven research teams was jointly headed by a Serb and non-Serb scholar who worked together in establishing and executing a common research agenda. As a rule, practical considerations (such as language, health, or personal preference) mandated an asymmetrical division of responsibilities, with one team leader emerging as the “principal investigator”. The two leaders’ chief responsibilities were to direct their team’s research activities and, eventually, draft the group’s final report.

It is perhaps the most objective history of the breakup of Yugoslavia to date produced.

With regard to the War in Croatia (and my last post), this passage from the summary is appropriate:


Belgrade played on these fears with a massive propaganda campaign that portrayed Croats as “genocidal killers” bent on a campaign of violence and genocide. At the same time, however, Serbs were motivated not only by an understandable fear, but by the desire to be part of a Greater Serbia, regardless of how they were treated by Zagreb.[Ed] Much as the quest for a Greater Serbia had helped drive Yugoslavia toward dissolution, it now played an equally important role in the war’s outbreak.

and from the summary on the break up of Yugoslavia:


But neither these national historical narratives nor the (perceived) injustices they recounted ‘caused’ Yugoslavia’s collapse. Rather, it contributed to the maintenance of inter-group boundaries, distrust, and resentment that would enable an ambitious politician to mobilize his own group against others. Indeed, it required human agency and a conscious strategy – and money -- to take a people who had been neighbors, in-laws, friends, and comrades and lead them into a fratricidal war. It was Slobodan Milosevic who exploited economic and other problems by leading a “national revitalization” movement within Serbia which sought political and territorial objectives incompatible with the interests of other republics and national groups. [Ed]

I'm not denying that the Croats and others contributed to the break up, but but the major dynamic which drove the war was a quest for Greater Serbia. Charles Ingrao pretty much states the same in his talk listed above (about a third of the way through). The Nationalist forces which arose in the different communities were a response to the Serbian Nationalist project.

The study also goes to show that claims of Muslim fundamentalism, especially in Bosnia, were non existent.  Trifkovic's claims that the Serbs were warring against the Jihad is bullshit. He is doing a Duranty. But it was meant for gullible Western Consumption--( the useful idiots of the right)-- and it continues to be pushed as a rehabilatory mechanism to counter negative public opinion earned by Serbian Nationalists during the War.

(That's not to say that Islam is compatible long term with the West. Personally, I don't think it is. Still killing innocent people is not the way to solve the problem. In the former Yugoslavia, the Muslims had adopted secularisation almost as enthusiastically as Christians do now in the West. It was the barbarities and brutalities meted out to them during the War (by Srdja's friends particularly) that radicalised them. BTW, Srdja's friends were quite happy to cut deals with the muslim invader whenever it suited their interests.)

Reality is a bitch.
Posted by The Social Pathologist at 11:05 pm 24 comments: