Now, I'll tell you how I felt about de Gaulle. About two years before de Gaulle came back into office I began to tell Dulles, I said, now look, Foster, our only hope in Europe is to get de Gaulle back in. He is the only man that will save that country. Now, let's make no mistake -- this man is not easy to deal with and, I said, as a matter of fact, that I was probably the only American that was welcome in his house. But the thing is, only he can save France, and France is going down the drain. 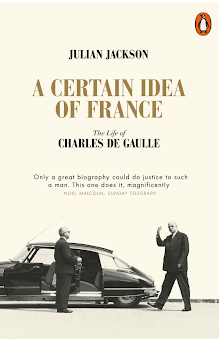 I haven't been posting for a while thanks to commentator Jason. As a result of his recommendation to read Julian Jackson's biography of Charles De Gaulle, I've ended up falling down a rabbit hole of contemporary french history, European politics, philosophy and theology which I'm still trying to make my way through.

I've always had a great respect for Charles De Gaulle, ever since I read my first biography about him. I have always considered him one of the great statesmen of the 20th C. In light of the new material that I've been acquainted with I have now re-evaluated my opinion of the man and regard him as its greatest. I say that with the full recognition of the other famous leaders and their circumstances. Perhaps his nearest competitors are Konrad Adenauer, Lee Kwan Yew and Theodore Roosevelt but for a variety of reasons I feel that none of them was able to achieve so much with the hand that fortune had dealt them.

But first to Julian Jackson's biography.

A Certain Idea of France has achieved many accolades and I must admit the book is well written. I had actually read bits of pieces of it in the past but had not tackled it in its totality before. Jackson is a great story teller and gives a great account of De Gaulle's tumultuous life. The book is great on detail without getting boring and it does appear that Jackson is trying to give a fair and balanced account of De Gaulle's life. However, it does appear to me that the French critics of the book are to a certain degree right, in that the book gives a very British view of his life. And what I think the French critics are saying is that the British interpret De Gaulle incorrectly and I think that they are right.

The problem with Jackson's book is while he gives a good account of the life of the General but in my impression there's a "spin" to it, either conscious or unconscious, that is really not corroborated by an investigation of the facts which leads me to the conclusion that the author did not really understand his subject matter. He gave a good rendition of his life without understanding the man.

The Anglo-Saxon approach to De Gaulle tends to emphasise the negative experience of his personality as if this was an unavoidable feature of a "man of history." He is described a prickly, petty, cold, aloof, arrogant, ungrateful and spiteful man, especially to the British.  One really gets the impression that De Gaulle was a unnecessary "pain in the arse" and did everything he could to sabotage the latent goodwill of the British and Americans toward him. Furthermore, while Jackson, does acknowledge De Gaulle's patriotism it does appear to me that Jackson suggests that there is calculating Machiavellian component to it that poisons it's sincerity.

The impression that I got from Jackson was the De Gaulle was a disagreeable politician that was scheming for somewhat cynically for French dominance, particularly in Europe. And then while looking a bit deeper into some of the issues involved, I came upon this interesting interview with Dwight Eisenhower which gave me the impression of a totally different man. (It's worth a read)

Part of my trip through the rabbit hole has been trying to work out which of the two versions of De Gaulle is correct. It's my opinion that Eisenhower's assessment is a truer understanding the man.

And that's where things get really interesting. In trying to understand De Gaulle you begin realise the greatness of his being and the vision he was trying to implement with the limited means at his disposal, all the time being undermined by "friends" and enemies. In a sort of super-Nietzschean sense, it was not enough for him to will himself to power, he willed France to power, particularly "a certain idea of it". The tragedy of his story is that the French people in 1968--as in 1939--weren't up to the task, and as Michael Houllebecq has demonstrated in his novels, they preferred mediocrity to greatness.

De Gaull's conception of French "greatness" was based up a deep sense of its history and culture. He saw France as a "light to the world" and it was only when the French were fulfilling this role were they truly themselves. At the bottom of this is an identitarian conception of France which saw it as having a unique  role in the world.

Identity is a keen theme in the philosophy of De Gaulle and it's important to understand that he didn't want the world to be "French" as much as he wanted the world to be influenced by France. No where was this line of thinking more evident than his conception of the European Union which he saw as a "Europe of patries" where each nation maintained his identity as opposed to a supranational european state which suppressed them. He would have supported Brexit, not because he hated the British but because, in a certain sort of way and no matter how much it exasperated him, he loved them being British.

De Gaulle’s concern was that political decisions affecting Europe should be made primarily by national leaders attached to national realities as they sought to negotiate outcomes that would first benefit their nations and thereby Europe as a whole. No doubt, this demanded a degree of statesmanship which (de Gaulle would undoubtedly agree!) was probably beyond most national leaders. But to refer to “Europe” as a political entity without more-or-less immediately speaking about European nations risked, from de Gaulle’s standpoint, precipitating a slide into a highly technocratic conception of Europe: one which viewed the differences between European peoples which reflect the rich tapestry of European culture as atavisms that obstructed the realization of perpetual peace and an apolitical empire ruled by largely unaccountable bureaucrats.

Jackson misses the point that much of De Gaulle's intransigence and rudeness--on many occasions completely justified--came about as result of his attempts to reassert both French and European identity against the homogenising influences of Modernity, particularly the Anglo variety.  It's interesting to see that one of his most pointed criticism of Churchill was that he subordinated the British identity and independence to that of the United States. De Gualle never allowed France to follow this course; to his core he believed in the primacy of identity.

Jackson frequently attributes De Gaulle's identitarian impulse as reaction to the "humiliations" of a "dependent France" suffered by the hands of Britain, U.S and Nazi Germany, but here I think he has also missed the mark.

De Gaulle was perhaps one of the most "intellectual" politicians of the 20th C.  He thought deeply about  about the issues of nation and state, politics, religion and history. He read widely and deeply and his identitarian politics were as a result of a deep understanding of the human condition and politics. De Gaulle was no reactionary, he was a positive identitarian.

But what also struck me while digging deeper into his life is just how important religion was to him and just how influenced he was influenced by many of the writers associated with the Nouvelle Theology movement: Bergson, Maritan, Bernanos, Mauriac, but most particularly Charles Peguy. While there is no doubt that he was quite "conservative" and sympathetic to Action Francaise, he was not cut of their cloth. If I have understood De Gaulle at all, then his vision of France was influenced by a new "Right Wing" version of Catholicism which was able to transcend the moribund traditionalism of the past while avoiding the idiocies of its "liberal" opposition.

People who have frequented this blog will know that I think that one of the reasons why Christianity is in decline is because it affected by a heresy akin to Buddhism which has sapped it of its vitality. What surprised me was that what De Gaulle embodied--and attempted to instill politically-- was a spirit of anti-buddhism which he drew from these "nouvelle theological" authors.  He wanted Christianity, France and Europe to live. Unfortunately, he was undermined by other.

The political Right--and I'm not including Conservative Inc. in this group--seems rudderless at the moment. I think there is a lot of profit to be made from studying De Gaulle and the authors that influenced him. His ideas on nation, identity, history and politics bring a different approach to right wing thought. While Julian Jackson's book is a good read and has chronicalled his life well you'll miss the man for the history and hence the book is not a good start.

Posted by The Social Pathologist at 11:03 pm 15 comments: