De Gaulle and the Americans: I

In London, Koenig simply ignored de Gaulle's instructions about ending contacts with Eisenhower, and Eisenhower, desperate to invite de Gaulle to London, pushed to the limits what was permitted by Roosevelt. Roosevelt seemed on the verge of conceding that de Gaulle could be brought into technical military discussions about the Liberation as long as the discussions avoided 'politics': he told Eisenhower that the French were `shell-shocked' (his way of explaining away the irrefutable evidence of de Gaulle's popularity). Eisenhower replied that there seemed to be only two factions in France: the 'Vichy gang, and the other characterized by unreasoning admiration for de Gaulle' (the 'unreasoning' presumably added for Roosevelt's benefit)." In the same vein, even Churchill cabled Roosevelt arguing that 'it is very difficult to cut the French out of the liberation of France.'" He was under increasing pressure from British public opinion, parliament and his own government to bring de Gaulle into the discussions about the Liberation.

As bad as de Gaulle's relationship was with the English it was even worse with the Americans.  Put simply, the American Government put their hopes in cutting a deal with Vichy--and were quite prepared to turn a blind eye to some of their more odious policies--if they would switch sides. Indeed, what struck me in reading about US-French relations during the Second World War is just how disturbingly accommodating the Americans were to the Pro-Nazi French, not really the image one gets from the movies.  Soon after American entered the war, the Free French captured some small islands in control by Vichy.

The U.S. demanded that they give them back.

What's really interesting about the Pro-Vichy approach that the U.S. took is that it took no account of both French culture and the internal dynamics of French politics: The French Left hated the French Right. One of de Gaulle's principle achievements was in convincing the French Left that he wasn't of the Right, but rather someone who transcended the divide. The U.S. seemed clueless about this dynamic. Indeed de Gaulle's description of Cordell Hull, the U.S. Secretary of State is particularly apt,  "he had an elevated soul".."handicapped by his limited knowledge of everything that was not America."

The thrust of U.S. foreign policy was to gain the support of Vichy and to use the Vichy French as co-liberators of France, not that the Vichy would assume control of France after victory, rather that U.S. government would govern France "like an occupied country" until "free elections" were held. As Roosevelt told de Gaulle in Casablanca:

The sovereignty of France, as in our country, rested with the people, but ... unfortunately the people of France were not now in a position to exercise that sovereignty . . . The Allied Nations fighting in French territory at the moment were fighting for the liberation of France and they should hold the political situation in 'trusteeship' for the French people ... France was in the position of a little child unable to look out and fend for itself.

This would have gone down like a lead balloon with de Gaulle but how this would have gone down with the French is anybody's guess. It's highly likely that it would of made the post war stability of France much more difficult.  What would have made matters worse would of been the planned issuance of "liberation currency" which would have have given allies an unfair exchange advantage,  been highly inflationary and likely financially ruinous for many of the French.  It's not hard to see how the communists would have exploited this to their own ends.  It was fortunate that Eishenhower was able to mitigate the most idiotic aspects of American policy.

The U.S. hostility to the Free French wasn't driven by public opinion, in fact it was the opposite. The U.S. public, like the English, was incredibly supportive and friendly to de Gaulle, it's just like the case with the U.K. , the people were supportive and the government was hostile. De Gaulle recognised this. In fact when the US government brokered a deal with the Vichyite Darlan the public hostility was so great that they had to reassure the public that it was only a "temporary" arrangement. The public were on the side of the Free French.

A lot of the U.S. administration's hostility to de Gaulle came from Roosevelt himself. He seemed to go out his way not to give recognition to the Free French (He also had the same attitude to the Polish Government in exile).A lot of the pressure that Churchill put on de Gaulle was as result of pressure he himself got from Roosevelt.  As  Churchill was keen on U.S. support he initially did Roosevelt's bidding, but towards the end of the war, when the British realised that U.S. wouldn't be so mindful of their interests they recognised the benefits of having another power by their side and were less hostile to the French, beginning to advocate for them. In fact they and Stalin had to pressure the U.S. to recoginise the provisional government of liberated France.

De Gaulle once said that that he and Churchill fought often but ultimately got along. He also said that he and Roosevelt never fought but never got along. The problem was in the natures of De Gaulle and Roosevelt; they were fundamentally incompatible. Both men were idealists to a certain degree but De Gaulle was a from a deeply "radical" Catholic cloth which is foreign to in many ways to the American mind, Roosevelt a Wilsonian idealist in the manichean tradition. He wanted France liberated and transformed into an American styled democracy. For Roosevelt people were "abstractions"--in that people were all alike--and therefore American style democracy was the best form of government for everyone.  For de Gaulle  blood, soil and a history were one, which meant that democratic conventions were always contingent on temporal circumstance. French democracy was going to be different to the U.S. version because the French were different to Americans.

Roosevelt worked hard to keep de Gaulle out of Potsdam and Yalta and in my opinion the fate of Central Europe, in particular, may have taken a completely different course had he been there. Churchill, in particular wanted to push the Iron Curtain east. But as he was the junior partner of the triumvirate, he was sidelined by Roosevelt and Stalin who basically divided Europe up. Churchill--and middle Europe--would have had a stronger hand if de Gaulle had been there. 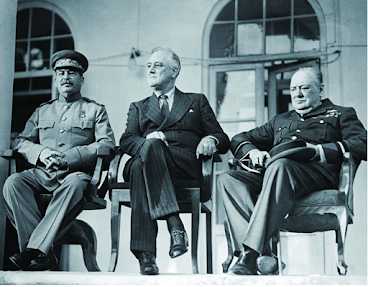 Posted by The Social Pathologist at 10:09 pm 3 comments: