The Human Operating System: The Rise of the Machines. 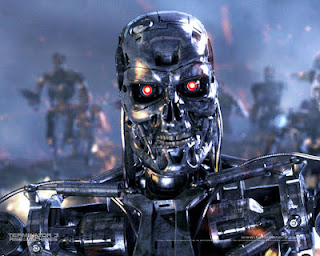 ..in that they show the work of the Law written in their hearts, their conscience bearing witness and their thoughts alternately accusing or else defending them,


One of the most amazing things I have ever seen is a watching a young child, blind from birth, get up and walk. If you think about it from an engineering perspective, walking is an incredibly complex activity, requiring significantly rapid computational power to ensure both balance and locomotion, yet nearly all little children are able to do so without any real difficulty. The amazing thing in this blind child's instance is that she did it without any form of spatial orientation or visual example or how to do. The functional capacity was innate. She was not born a blank slate.

People tend to look at human behaiviour without reference to the computational mechanics involved. Take, for example, disgust, as mentioned in the previous post. For the brain to elicit a disgust response visual, nasal and tactile information must be computationally analysed and an appropriate response be elicited. The disgust response predicates circuitry or software which is capable of eliciting it.  Furthermore, the sensation of disgust is not some lower order reflex like a knee jerk, but rather one that can be elicited across a wide variety of real and imaginative human situations.

Furthermore, some things are intuitively disgusting, which implies that not only is there pre-existing circuitry which enables the response but that certain conditions are capable of eliciting it to the exclusion of other situations. In other words, values are front loaded and the system can discriminate.  Why are slimy things thought of intuitively disgusting or bad smells. Likewise, deformity but why not beauty?  Clearly the disgust mechanism is biased toward one type of outcome.

Likewise with hypergamy. Why are not all men equally capable of eliciting arousal in women? Why is arousal conditioned on several predicate factors. In other words, why does it discriminate against one type of man against the other? I suppose some people will say evolution but the important point to noted is that the hypergamic response is biased toward a certain type of male. The values are front loaded.

Human beings are not born blank slates, rather,  we have predictable patterns of behaviour  which we bundle under the name of human nature. We feel affection for our kin, we associate with like, we chafe at injustice (think about it, why do we have any response at all when we see injustice), predictable things elicit disgust. We have an inbuilt operating system.

Much like a microprocessor, on its own, is incapable of doing anything meaningful without an appropriate program likewise neurons have to be "wired up" and signal transmission needs to be modulated across them in order for any meaningful behaviour to be elicited. The human mind has an architecture which predetermines human nature. We tend to think of instinct in terms of animalistic tendencies but I think we fail to appreciate that instinct operates at much higher levels with several higher order cognitive functions being instinctive as well. Human beings are born with an operating system.

But much like there is a difference between Windows and iOS it appears that not all humans are born with the same operating system. Rather their seems to be a variance amongst people. As mentioned in the previous post. Disgust sensitivity seems to vary amongst individuals, so while all humans may have a disgust response, saying that disgust is part of human nature can easily obscure the fact that there is a wide range of sensitivity with regard to it.

Experiments in cognitive science show that morality is frequently a rationalised intuition and it's fascinating to think that basics of human morality may be encoded into our genome throught the genetic biases that are encoded into our higher order response. How we "feel" about a certain thing seems to be influential in our moral understanding of it. The feeling we get to a situation, on the other hand, seems to have a strong genetic component.

Which brings me to cognitive science. I'm a big believer in the Dual Process theory of the mind (with updates later) and what I think we're seeing in the distinction between System 1 and System 2 process of the mind is the strong genetic basis to System 1 i.e. biocognition and System 2 processes being more abstract. Hypergamy, Disgust, Homophily are all System 1/genetic responses. System 1 is our inbuilt operating system, it's what gives us our human nature.

Posted by The Social Pathologist at 11:31 am 11 comments: