The Foundations of Conservatism: The Mind's Understanding of Reality

Now for some conceptual art.

As mentioned before, Conservatives believe that reality is composed of two parts. That which is perceptible and that which is not. We can draw a diagram which illustrates the conservative conception of reality as follows: 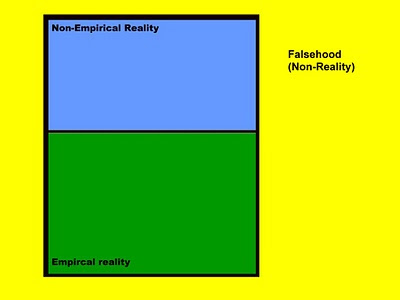 The green area is perceptible reality--stuff that we detect through our senses--and the blue is non-perceptible reality. Stuff that's out there but we can't directly sense. The yellow area represents an ontological plane of non-reality; that is of things that don't exist(propositions which are false).

In the conservative scheme of things, the mind sits between the two planes and is able to know elements of both, even if the mind does not understand. That is, the mind has a capability to grasp both empirical and non-empirical reality, (I'm going to keep this simple for the moment and ignore the fact that the mind can also grasp falsehood. Imagine little yellow circles in the white one.) 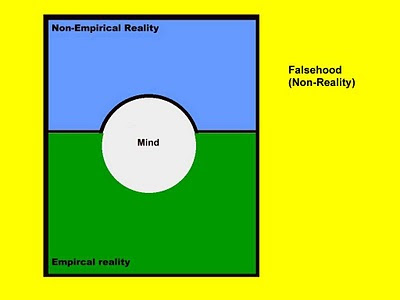 Now, note the black line in the blue area that separates the white circle, that represents a "Sense barrier". By sense barrier, what I mean is that stuff on the other side of it--real stuff that exists--is not directly accessible by our senses. The important part about this is that the mind is capable of knowing whats on the "other side" but there is no way to physically perceive it and hence test it scientifically. ( I don't care if you don't believe it, just go with it.) We'll get to the importance of this later on. Ancient Roman, Greek, Hindu, Jewish, Chinese, Sumerian, Viking, i.e Traditional cultures, all had this view of reality. It's only in modern times that man has deviated from this vision.

Now the great revolution in human thought came about through the scientific method. Here theories were tested by sense observation and either validated or rejected. The "hard core" proponents of the scientific method insisted that the only valid knowledge was knowledge derived and verified by sense experience. Their ontological understanding of the hard core empiricists was as follows:

The strict empiricists basically said that since we can't test what's beyond the sense barrier, it either: 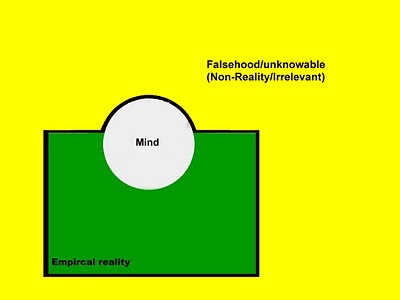 a) Irrelevant.
b) Not worth knowing.
c) There is nothing beyond the sense barrier.

Now before we diss Empiricism we must recognise its strengths. By forcing men to seek an explanation of natural phenomena without an appeal to "higher powers" men were forced to look for answers amongst the perceptible world. Let's just say that the results produced by the scientific method were spectacular and the results justified the belief, and a corresponding contempt for knowledge that was not derived from it. Furthermore, as science progressed, physical phenomena were found to have to rational explanations which did not require the invocation of God. Theistic explanations gave way to scientific ones and this of course led to a certain optimism that everything could be explained by science.

Believers of empiricism can be thought of having a continuum of opinions of what lays beyond the sense barrier. The strict empiricists(Atheists) believe that nothing exists. The weak empiricists (Agnostics) believe that something may exist but as we cannot empirically verify it and therefore the knowledge is either irrelevant or the subject of personal opinion.

The strict empiricists basically declare that anything that was beyond the sense barrier was not valid knowledge, as it cannot be empirically verified. According to their view, any such "knowledge" was at best second rate and at worst blind superstition.

Now, the first thing to consider is by accepting the strict empirical view of reality a man separates himself for the bulk of traditional humanity by positing a conception of reality which is at odds with the rest of man. From an empirical epistemological point of view religion belongs either to the second rate knowledge or superstitious category. Therefore its thrown out of the window as a practical knowledge.

However then a real life practical problem arises. Humans are interpersonal beings that relate to each other through behaviour, and behaviour implies imperatives. i.e. How to behave? Empirical observation does not give us a guide on this matter. Since empirical observation can show us how best to achieve our goals but it cannot give us those goals in the first place.

The traditionalist view was that the knowledge of these goals came from the non-empirical realm something the empiricists rejected. They had to place the locus of these goals in the mind or self. Morality becomes self-generated or self-optimised. Here are the seeds of moral relativism.

Now it needs to be understood that Conservatism is not opposed to the empirical method, it's opposed to the empirical ontology, an ontology which is profoundly anti-conservative. On the other hand, many strict empiricists are hostile to Conservatism because conservative moral claims--derived from non-empirical reality--are usually hostile to some of their personal claims. As I've said before, strict atheism is intrinsically unconservative because atheists deny the realm of reality from which Conservatives derive valid knowledge. Saying that, however, many atheists can with sufficient intellectual honesty and intellectual strength and exertion arrive at a knowledge of "Natural Law" and therefore appear "conservative" without a belief in any non-empirical reality. (Something a complete idiot can efficiently arrive at simply by having faith) A case in point is Heather McDonald.

These type of Conservatives are very conservative, except that they're not.

The minimum ontological vision that a man can possess and still be considered conservative is agnosticism, though I equivocate on this issue and I'm capable of being convinced otherwise.
Posted by The Social Pathologist at 10:30 pm 13 comments: