Some Thoughts on Charlottesville 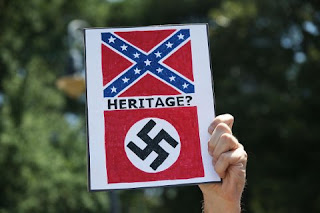 When Paul Gottfried coined the term Alt-Right, he saw it as an alternative form of Conservatism that would eventually replace the mainstream variety that was ineffective at dealing with society's drift to the Left. He never really envisaged it as Nazism or KKKv2.0.

As I see it, the Alt-Right was initially a tangential development of the manosphere where people who had been "red pilled" about sexuality connected online to discuss other issues which they had been "red pilled" on.  Eventually these people reached a critical mass and formed a coherent worldview about the nature of society's problems and started describing themselves as Alt-Right. I've been blogging for over ten years now and was there when it happened.  Sure there were nascent elements beforehand, but it was the Internet which enabled the interactions which allowed the critical mass to form.

At the outset the critical mass was racially aware but not racist. It was pro-Western civilisation, which it saw as a good, and pro tradition. It was anti Marxist, anti-PC and anti-sexual ambiguity.  And it was, in my opinion, making considerable headway into the mainstream culture. Those who have been following my blog for a while will know that my greatest fear for the movement was that it would be co-opted by the National Socialist elements, who would eventually drive the movement to ruin.

And I was right.

Prior to my warnings, I was getting a steady growth of traffic onto my blog, with about 40k views a month, after my attacks on the Natsocs, my traffic decreased dropped to about 5K views a month on my new posts. Clearly, I had pissed a lot of people off.

What concerned me most was not the drop in my readership but the realisation that many people were quite sympathetic to the ideas of National Socialism and outright Racism and it's a measure of how bad things have become when the opposition to Left evil was a variant of Right evil. Spencer, TRS and others seem to have been given a free pass by a lot of people who should have known better, and the enthusiastic repeated references to Nazism sort of nullified their "irony". The Alt Right was being transformed into American Natsoc v2.0., all with plausible deniability. Furthermore, apart from the nationalistic component of their ideology, there really wasn't much that was "Right" about them at all. They embraced sexual degeneracy, atheism and multiculti for whites only. Victor Orban--a Christian-knew what he was dealing with, cancelling their meeting and putting Spencer in jail.

A lot of other people were concerned with the co-option and hence the formation of the Alt-lite, there still however, wasn't a clear disavowal of the Natsoc element. And I think the view among many of the normies was that the Alt-Right and Alt-Light represented two poles of a spectrum rather than two discrete positions; they were still one unified body. Spencer and his ilk seemed keen not to dispel this notion. Unfortunately, this meant that whenever the Natsocs did anything stupid the rest of non-mainstream Right took the heat as well.

Now I've got my tinfoil hat on at the moment, but all to post debacle Charlottesville  data coming through seems to suggest that there may have been some behind the scenes "management" going on to paint the non-mainstream Right in the worst possible way. Spencer, may or may not be a plant but he sure as hell acts like one. How Jason Kessler was allowed to organise the rally is simply beyond me, especially given his history, and the presence of the Nazi flags gave terrible optics which was there to be captured by a waiting media who were notified of the event well in advance. (It doesn't matter if it was a plant, good organisation would have stopped it. I would have had my guys beat him up in front of the cameras.)

The point of the whole event being, as I see it, to discredit the entire non-mainstream Right and it work. It was a disaster. And justified the Twitter and internet repressions. Expect it to continue.

Furthermore, the post debacle online "agony" seemed to me to illustrate that the Right is still not aware of both the magnitude and nature of the menace it is dealing with. The Right needs to understand that Antifa is the paramilitary arm of the liberal managerial state, it becomes easier to understand events when seen through this lens. Hence the differential treatment by the media and government apparatus.

As I see it, the whole debacle illustrates several major problems with the non-mainstream Right. They are:

Still, I regard the events as a strategic victory for the Dissident Right. And by Dissident Right I mean it as Gottfried originally envisaged it. A Right that was built upon the traditions and identity of the West minus the modernistic ideologies trying to infiltrate it. The Charlottesville debacle seems to have pushed enough people to disavow themselves from the Natsocs which makes me think that future infiltration by them will be neutralised. They are now persona non grata.

Furthermore, Trump's dog whistle to the Dissident Right, legitimising the concerns of normal, decent people while criticising the nutjobs shows that there is sympathy for the dissident Right:

As I see it, the left has destroyed its greatest "asset" in its war against the Right, the Natsocs, and done for the non-mainstream Right what it should have done itself a long while ago. The scorecard at the end of the day was,  a tactical victory for the Alt-Left, strategic loss for the Alt Right, strategic victory for the Dissident Right.

Posted by The Social Pathologist at 11:03 pm 16 comments: