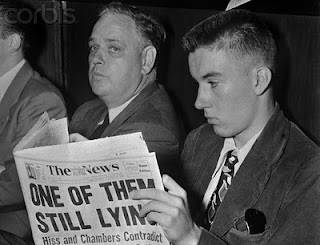 I thought I would add to s short series of faith-as-a-type-of-sense posts with the example Whittaker Chambers own experience of it.  Chambers was an intelligent man and gifted writer, eventually ending up as one of the editors on Time magazine, earning the then astronomical sum of $30,000 dollars a year. He was communist in his young adulthood, working actively in the support of the Stalinist Soviet Union, both as a spy and as an agent of influence.

As a result of his conversion, he gave up his job, his friends and reputation, to "rat" out on his former communist buddies, particularly Alger Hiss. The Hiss trial was America's version of the Dreyfuss affair and polarised the nation.  Although Hiss was convicted, one certainly gets the impression reading American history that "polite society" was on the side of Hiss. It was glamorous left v's stodgy right. Chambers may have been right but he was boring, Hiss evil, but stylish. American society preferred the stylish.

I've not done much reading on Chambers but from what I have, he and I seem on the same "wavelength". I've just ordered a couple of his books and hope to have something intelligent to say about him in the near future but his own description of his "turn from the Left" is a clear example of the faith-sense in action.


But I date my break from a very casual happening. I was sitting in our apartment on St. Paul Street in Baltimore. It was shortly before we moved to Alger Hiss's apartment in Washington. My daughter was in her high chair. I was watching her eat. She was the most miraculous thing that had ever happened in my life. I liked to watch her even when she smeared porridge on her face or dropped it meditatively on the floor. My eye came to rest on the delicate convolutions of her ear-those intricate, perfect ears. The thought passed through my mind: "No, those ears were not created by any chance coming together of atoms in nature (the Communist view). They could have been created only by immense design." The thought was involuntary and unwanted. I crowded it out of my mind. But I never wholly forgot it or the occasion. I had to crowd it out of my mind. If I had completed it, I should have had to say: Design presupposes God. I did not then know that, at that moment, the finger of God was first laid upon my forehead.

Once again, as in C. S. Lewis's conversion, an involuntary conviction took residence in his mind. A thought which he had not willed and a though which he actively tried to suppress.  Many who fail to understand religion rationalise that the religious experience is created in order to satiate some type  of psychic need. Clearly, in this instance, Chambers had none and in fact was surprised by the ideation;  his psychic needs tended in the opposite direction. The proposition with regard to his child's ear was not some form of rational construction, rather the thought, "popped" into his head the same way the vision of the coffee cup in front of me "pops" into my mind: it was sensed.

The atheist has no idea how unsettling to the mind the experience is, how unwilled, and how "out the blue" it. And how sometimes the sensing individual will do all he can to "rationalise" the experience away. I was tired, bad onions, too much to drink, etc and I suppose with enough effort a man can suppress it. But more often than not, it forms a vague conviction.

As a result of his experience, Chambers became a Christian, but he never did settle on one denomination. It appears that he did not really care all that much about the theology of God, only the reality(and the implications) of His existence. Communism, and its parent atheism, were incompatible with that view.
Posted by The Social Pathologist at 10:01 am 29 comments: