More wisdom from the Fairfax Press.

What do Haitians need most? To get away from Haiti 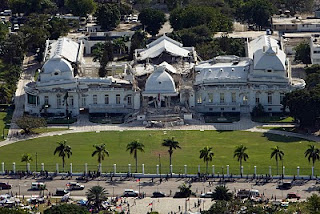 Haiti is dysfunctional society because it is run by Haitians. And while the disaster is Haiti is truly terrible: it is terrible and yet utterly predictable. Professor Hale has commented on the disaster and its causes and quite simply, he's right. Poor building practices in a corrupt society mean that building codes(which no one even to bothered to propose ) don't get enforced. When the inevitable earthquake happens, the predictable disaster ensures. Tragedy.

But poor building practices are not the result of government fiat, but of a culture. A culture that values the short term over the long and culture that places little value on life itself. The War Nerd wrote an interesting article on the culture of Haiti. Bottom line; a corrupt society from the top to the bottom. Once again for my pea brained detractors, not all Haitians are corrupt; only most of them. Now this may be cruel thing to say to a nation which has suffered so much misfortune, but facts are facts, Haitian culture does not seem to be able to produce men capable of disinterested service even in the midst of so much foreign aid.

Now I can understanding that people are moved by the plight of Haitian individuals caught up in the earthquake, but feeling good about oneself and actually doing something useful are two different things. Now Chris Berg's article is full of errors which will compound the problem instead of making it better but the question I want to ask is, should we be importing people from a dysfunctional culture which is the product of those same people?

People who are pro-immigration tend to ignore this fact. The influx of Italian migrants into Australia and the U.S. was not a one sided thing. In importing Italians, America and Australia profited from both a better cuisine and worse a criminal element, the Mafia. And whilst on balance, I think Italian migration a good thing, it serves to illustrate the point that when a man brings in migrants he brings in more than just the man, but his ideas, his culture and the way he lives. Of course the dominant culture also makes its mark, so what happens in the end that a fusion occurs, the flavour of which is dependent on the elements of the mix. S

Now the question to ask is, are there cultures which are bad, which are incompatible with our way of life? Do we want more Haitian culture in our society? A culture that seems to glorify the thug, the bling king, self interest and opportunism. A cursory look would suggest not, and idiot would propose spreading the contagion around the world.

To a pro-immigrationist, multiculturalism means a different cuisine every night, retiring home to your uppity white suburb at night. The wogs are good to visit but you don't really want to live with them. The problem though is though, if you bring enough people from a bad culture into your country you also bring a bit of that bad country in as well. As many your own poorer people who--because of economic necessity--have to live next to the newly arrived immigrants will tell you, not all immigrants are fun to be around with. But that demographic does not make social policy. The world does not need more Haitis.

In fact the only time Haiti ever seemed to have a period of prosperity was when American culture was forcibly imported into Haiti. Some cultures seem to bring more benefit than others.
What Haiti needs is not exodus of its people but good governance, and if the local culture can't produce men that can govern humanely then perhaps humane men should force good governance on Haiti from the outside. This of course is true but politically incorrect.
Posted by The Social Pathologist at 9:44 pm 7 comments: