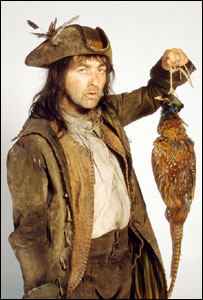 DEMOCRACY CAME INTO THE WESTERN WORLD TO THE TUNE of sweet, soft music. There was, at the start, no harsh bawling from below; there was only a dulcet twittering from above. Democratic man thus began as an ideal being, full of ineffable virtues and romantic wrongs-in brief, as Rousseau's noble savage, in smock and jerkin, brought out of the tropical wilds to shame the lords and masters of the civilized lands. The fact continues to have important consequences to this day. It remains impossible, as it was in the Eighteenth Century, to separate the democratic idea from the theory that there is a mystical merit, an esoteric and ineradicable rectitude, in the man at the bottom of the scale-that inferiority, by some strange magic, becomes a sort of superiority-nay, the superiority of superiorities. Everywhere on earth, save where the enlightenment of the modern age is confessedly in transient eclipse, the movement is toward the completer and more enamoured enfranchisement of the lower orders. Down there, one hears, lies a deep, illimitable reservoir of righteousness and wisdom, unpolluted by the corruption of privilege. What baffles statesmen is to be solved by the people, instantly and by a sort of seraphic intuition. Their yearnings are pure; they alone are capable of a perfect patriotism; in them is the only hope of peace and happiness on this lugubrious ball. The cure for the evils of democracy is more democracy!

This notion, as I hint, originated in the poetic fancy of gentlemen on the upper levels-sentimentalists who, observing to their distress that the ass was over-laden, proposed to reform transport by putting him into the cart. A stale Christian bilge ran through their veins, though many of them, as it happened, toyed with what is now called Modernism. They were the direct ancestors of the more saccharine Liberals of to-day, who yet mouth their tattered phrases and dream their preposterous dreams. I can find no record that these phrases, in the beginning, made much impression upon the actual objects of their rhetoric. Early democratic man seems to have given little thought to the democratic ideal, and less veneration. What he wanted was something concrete and highly materialistic-more to eat, less work, higher wages, lower taxes. He had no apparent belief in the acroamatic virtue of his own class, and certainly none in its capacity to rule. His aim was not to exterminate the baron, but simply to bring the baron back to a proper discharge of baronial business. When, by the wild shooting that naturally accompanies all mob movements, the former end was accidentally accomplished, and men out of the mob began to take on baronial airs, the mob itself quickly showed its opinion of them by butchering them deliberately and in earnest. Once the pikes were out, indeed, it was a great deal more dangerous to be a tribune of the people than to be an ornament of the old order. The more copiously the blood gushed, the nearer that old order came to resurrection. The Paris proletariat, having been misled into killing its King in 1793, devoted the next two years to killing those who had misled it, and by the middle of 1796 it had another King in fact, and in three years more he was King dejure, with an attendant herd of barons, counts, marquises and dukes, some of them new but most of them old, to guard, symbolize and execute his sovereignty. And he and they were immensely popular-so popular that half France leaped to suicide that their glory might blind the world.

Meanwhile, of course, there had been a certain seeping down of democratic theory from the metaphysicians to the mob-obscured by the uproar, hut still going on. Rhetoric, like a stealthy plague, was doing its immemorial work. Where men were confronted by the harsh, exigent realities of battle and pillage, as they were everywhere on the Continent, it got into their veins only slowly, but where they had time to listen to oratory, as in England and, above all, in America, it fetched them more quickly. Eventually, as the world grew exhausted and the wars passed, it began to make its effects fell everywhere. Democratic man, contemplating himself, was suddenly warmed by the spectacle. His condition had plainly improved. Once a slave, he was now only a serf. Once condemned to silence, he was now free to criticize his masters, and even to flout them, and the ordinances of God with them. As he gained skill and fluency at that sombre and fascinating art, he began to heave in wonder at his own merit. He was not only, it appeared, free to praise and damn, challenge and remonstrate; he was also gifted with a peculiar rectitude of thought and will, and a high talent for ideas, particularly on the political plane. So his wishes, in his mind, began to take on the dignity of legal rights, and after a while, of intrinsic and natural rights, and by the same token the wishes of his masters sank to the level of mere ignominious lusts. By 1828 in America and by 1848 in Europe the doctrine had arisen that all moral excellence, and with it all pure and unfettered sagacity, resided in the inferior four-fifths of mankind. In 1867 a philosopher out of the gutter [Ed:Marx] pushed that doctrine to its logical conclusion. He taught that the superior minority had no virtues at all, and hence no rights at all-that the world belonged exclusively and absolutely to those who hewed its wood and drew its water. In less than half a century he had more followers in the world, open and covert, than any other sophist since the age of the Apostles.

I'm still suffering from a degree of writer's block and whilst I have quite a few ideas in my head, putting them down seems to be quite difficult.  In the mean time, I thought I would put up some passages from H.L. Mencken's, Notes on Democracy.

A good writer, trying to get his message across,  faces a special danger. Should he be a brilliant wordsmith, his polemic is more likely to be appreciated as literature rather than message; the message being lost in the delight of the writing style. Chesterton is one of those that comes to mind. Mencken is another. His mocking irreverent writing style is so pleasantly enjoyable that one tends to forget that there is some seriousness to his work. Mencken's professional occupation, like Chesterton's, was that of a journalist. He received little formal education but was one of those individuals whom one can consider a natural scholar. But unlike a typical scholar, cloistered away amongst his books in his study, Menken's reportage and journalism bought him into direct contact with object of much of his contempt: Democratic man.

People misunderstand Mencken. He was one of the first populisers of Nietzsche in the English language and assume by this association that he shared his philosophy. This view is incorrect. Mencken was more the empiricist than the Nietzschean and it was his strict empiricism that led him to views which were in accordance with Nietzsche.  Mencken believed in the untermensch not through the influence of philosophy, but through the day-to-day experience of his journalism and contact with the American Public.

In Mencken's world, there was a clear graduation in both ability and character amongst men. Mencken also recognised that the harder the task, the fewer the men fit to undertake it. Good governance he felt, was a balancing act of competing demands which required both extensive study and experience, something which the bovine masses lacked.  He saw that the average man was both stenosophistic in his intellect and local in his prejudices, and therefore he would work in the long run for personal advantage over the common good. His polemic against democracy was not so much against democracy as against universal suffrage. He realised that giving power to a fool allowed the malevolent to exploit him.  As such, he defined democracy as the worship of jackals by jackasses.

Mencken saw that with each iteration of the democratic cycle the stupid mass guided by the malevolent would conspire against the good. Moral relativism and defacto socialism would become entrenched as democracy pushed its militant egalitarianism. The mob's desire for security would triumph over their love for liberty. Bribery and corruption would become entrenched. Eventually the system would crash to ruins.

Mencken's concept of superiority did not mean the man from the "upper class" of society, blue blood or even "elite" as commonly understood. Mencken regarded many of what we would consider the "elite" as nothing more than proles that had climbed the social ladder. His concept of superior man was that of a civilised, intelligent, learned man of character. It is to these men, Mencken thought, that the fate of the country should be entrusted. The proles needed to be protected from themselves.

He particularly railed against the idea that the "little man" by being of low birth, was somehow intrinsically superior to all others.  It's an idea that was supported by two of the most diametrically opposed streams of thought. The Enlightenment, with it's idea of the noble savage, and a perverted Christianity which mistook the brotherhood of men as implicitly meaning the equality of all. Christianity's railing against the rich (whom were frequently the most obviously vile) supported this idea, but it needs to remembered that it was the common mob that shouted "give us Barabbas." It was the jackals and jackasses working together against the good.

And yet, this liberal idea of democratic man, has been adopted hook like and sinker by modern Conservatism. It is perhaps why conservatism withers under sustained liberal attack, because it is a house built on liberal sand. The rain comes and slowly it washes away.


Posted by The Social Pathologist at 10:32 am 2 comments: