I just wanted to put up some more data from the previously mentioned Scientific paper in response to a comment by TDOM.


There may be other factors than attractiveness involved in why older women have fewer partners. They may be busy putting working in order to put children through college, or just taking care of children may scare the men away, they may find men their age less attractive, or perhaps their sex drive declines, menopause, or their marriage may have put them off men. But being less attractive does sound good as an explanation.

The first thing that we notice from the data is that having children at home seems to only marginally decrease the odds of having two or more partners in the last twelve months. Secondly, compared to the never married, we notice that divorcee's are over twice as likely to be riding the carousel, and more than five times more likely than the cohabiting; divorcee's seem sexually willing.

What we also see is a drop off in the partner count as women get older.  Now, it's true that this may be due to female factors independent of attractiveness, and I imagine dating burnout is a factor, but menopause is not an issue, since most women enter menopause in their late 40's and the data suggests that child caring is only a small component of this decline.

But the common lament amongst the femmentariat is that men don't want to commit, or in other words, there are suitable males who want women for sex but not marriage. This implies that women are pursuing men with the "if I give him sex he will marry me" strategy. Therefore, it is not female choosiness that is limiting sexual activity but male choice.

I imagine that there are two factors at play. Firstly, amongst the pool of men that are unmarried, they can be divided into the sexually attractive and unattractive. Secondly, as the sexually unattractive males are "invisible" to women seeking a mate, this means that divorcee's must compete with remaining pool of attractive males. The relative scarcity of attractive men and the surfeit of divorced women mean that it is men who exercise mating choice. The older women are getting less hit upon.

What I find most interesting however is the data listing the odds of having five or more partners by age group. Most of the women who've clocked up five or more notches have done it by their late 20's. Does having so many when they are young destroy some ability to bond. We all know that the children from divorcees have a higher divorce rate, but perhaps promiscuity, too, somehow destroys the commitment capability.
Posted by The Social Pathologist at 10:47 pm 5 comments:

A scientific paper that may be of interest to men who frequent this corner of the blogosphere is  Divorce and Sexual Risk Among U.S. Women: Findings from the National Survey of Family Growth. Published in the Journal of Women's Health, in November 2011, the statistical findings were based on the 2002 cycle of National Survey of Family Growth (NSFG) involving 5800 women.

The authors of the study set out to fill a gap in the the literature with regard to the sexual behaviour of divorces and single adult women for the purposes of disease prevention. i.e the authors did not have some religious or social policy axe to grind. The paper is very interesting because it seems to be the first scientific paper to acknowledge a clear correlation between the risk of divorce and sexual risk.


Our study has several limitations. The data are cross-sectional and thus only correlative. We cannot conclude that divorce causes increased sexual risk any more than we can suggest that sexual risk causes divorce. The relationship exists, and further studies should focus on causal relationships between the two.

I think that the authors are being modest.

The study first cites other research which gives the rate of marital dissolution in the U.S to be 20% at 5 years,  33% at 10 years and 43% at 15 years. This "baseline" divorce rate is important in understanding subsequent findings. Secondly, they also cite research which shows that the probability of a divorce woman remarrying is 54%, this too, is important. Also important that the mean age of marriage for women is 25.3 years.

Now the authors divided women firstly into two groups. Those who had five or more partners and those who had four or less. (n=4 being the average number of partners a U.S. woman had at the time of NSFG study) 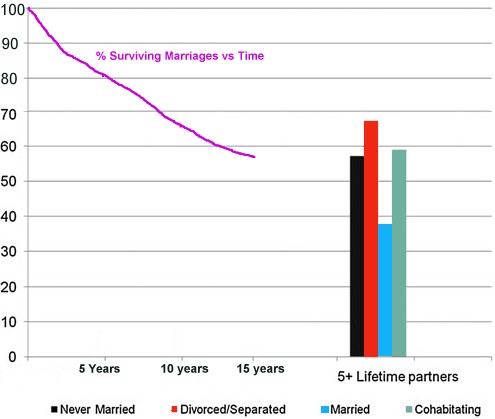 What I've done here is plot the "natural divorce rate" against the statistical findings of the "5 or more lifetime partner group".

The first thing we see that if a woman has five or more life time partners, she is more more likely to be never married,  cohabiting or  divorced  than married. Now remember, the married group includes women who have remarried. So the actual number of women who have never been divorced is actually smaller than what is indicated on the graph.

Secondly, the NSFG obtained data from women who were between 25-44 years of age The authors of the paper did not list the average length of marriage in the group, but since the mean age of marriage is 25 years of age, it would be safe to expect (using the worst case figures)that 43% of marriages should have dissolved at the based upon the 'background" divorce rate.  Now, if promiscuity is not related in any way to divorce there should be no significant variation from the natural divorce rate, and yet, what we see  in the "five or more group" only 37% of women married (and this includes the remarriages) instead of 57%. (Based upon a rough "back of envelope" calculation, I estimate that roughly 20% of the "five or more" group have never been divorced) Something quite real is going on here.

When you look at all the married women (i.e including those with four or less partners) women with five or more partners were 70% less likely to be married.

The study authors noted that the two groups of women did not appear to differ in any other meaningful way apart from partner count. Regardless of what anyone's position on social issues is there is a real phenomenon going on here. Number count does seem to matter. That's not to say that a woman who has had five or more lovers is unable to form a stable marriage, approximately 20-30% do, it's just how do you pick? Is it worth the risk? Do you want to put your kids through it? Now presumably, in a significant portion of marriages it was the men who instituted the divorce, but that does not explain  the huge variation in divorce rates based on partner count.

Finally, the authors were able to extract another interesting piece of data which I will call the "carousel index".

It's a quantitative measure in the decline of sexual market value. The near exponential decline in attractiveness is quantifiable.
Posted by The Social Pathologist at 12:05 am 16 comments: