And the Word was made flesh, and dwelt among us, (and we beheld his glory, the glory as of the only begotten of the Father,) full of grace and truth. 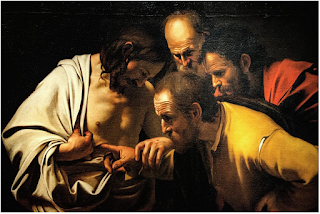 Charles Taylor's omission of the role of Grace in the mechanics of belief, in my opinion, fatally flaws his book with regard to understanding the phenomenon of secularisation. However, his book is not without merit, and where I think he is at his strongest is when he links the phenomenon of secularisation to the excarnation of the Christian religion.

Taylor, who is a romantic phenomenologist, describes excarnation as:


the steady disembodying of spiritual life, so that it is less and less carried in deeply meaningful bodily forms, and lies more and more in the head.

It could be said that this is the central thesis of his book and whats really interesting is that in many ways he is on the same page as some of the early Nouvelle-Theologians who were trying to understand why Christianity was declining in the West.  For Taylor, the transformation of Christianity from something one "felt" into a "philosophical system" that one mainly appreciated in thought fueled the rise of atheism. A Thomistic "cold and logical proof" was no substitute for the experience of God and in this regard Taylor echos the complaints of some of the more astute Christian theologians of the late 19th Century. It could be said that  Christianity in becoming hyper-rational also became boring.

The Thomistic understanding of man recognised that while body and spirit were different things they were "one" in reality, like the two sides of the same coin, and the human person was both spirit and flesh.  In technical language, Thomism asserted the hylomorphic nature of man.  Now the first point to recognise here the the relationship between spirit and flesh was intertwined. This impetricate relationship in many ways limited the expression of each element of this duality. The human soul was in some way a reflection of the flesh and the flesh was a reflection of the soul. The second point to recognise here is that while the spirit/mind/soul directed the body,  in many ways the body gave man his human nature and thereby a teleology which the soul aimed to achieve.

What this meant is that the soul could not direct the body in a direction contrary to human nature but rather it had to directed in a way which perfected it.   The soul was not given exclusive rights to make man as it wanted him to be rather human nature put limits on it.  The soul had to deal with the body's reality of hunger but it could not direct the body to eliminate it for the repertoire of human appetites.The point being that any governance of the body by the soul had to made with some kind of reference to the body as it actually was.

On the other hand, from some of the early days of Christianity there have existed elements and tendencies that have seen the relationship between the body and flesh as oppositional. Instead of seeing the body as a hylomophic reality they saw it as a duality.  This mode of thinking hierarchically ordered the relationship between the two, with the spirit being put above the flesh on a moral dimension. This type of relationship also sees the role of the spirit to constantly subordinate the flesh without reference to it, its innate nature is seen as a constant source of ruin to the spirit. A disassociation between the two is constantly at play and there is a continual attempt to separate the body from the mind. It is this attitude that I would consider excarnational.

No matter how much of gloss you try and put on it, certain strains of early Christianity appear to have had strong excarnational tendencies, with Augustine being a representative of this school of thought. Chesterton recognised that Christianity was beginning to veer and it was only through the efforts of Aquinas (and others) that it was bought back on course.  As Chesterton said;


The evil is always both within and without the Church; but in a wilder form outside and a milder form inside. So it was, again, in the seventeenth century, when there was Calvinism outside and Jansenism inside.And so it was in the thirteenth century, when the obvious danger outside was in the revolution of the Albigensians;but the potential danger inside was in the very traditionalism of the Augustinians. For the Augustinians derived only from Augustine, and Augustine derived partly from Plato, and Plato was right, but not quite right. It is a mathematical fact that if a line be not perfectly directed towards a point,it will actually go further away from it as it comes nearer to it. After a thousand years of extension, the miscalculation of Platonism had come very near to Manicheanism.

What Chesterton is saying here is that Augustinian Christianity sails very close to Manicheanism and without very strong explicit checks, can drift over quite easily into that error. The achievement of Aquinas was to ring-fence the faith. The problem was that the Reformation tore those fences down, with a result that Augustinianism reasserted itself. Not only in the Protestant Calvinistic strands of Christianity but in Catholicism itself.

Now what's interesting is how this theological change affected our culture and our understanding of ourselves. As I see it, it encouraged several different tendencies:

Firstly, it emphasised a division between the body and the mind.
Secondly, it elevated the mind above the body.
Thirdly, it facilitated the puritanical mindset by delegitimising the the carnal dimension of the human person.
Fourthly, It tipped the cultural balance in favor of the theoretical over the real
Fifthly, it enabled the formation of "constructed" identities which sought to escape their carnal limitations.

I suppose the best example of this line of reasoning is exemplified by the transgender movement, which draws much of its cultural legitimacy from the Christian-Manichean heritage. Here self-identity is seen as being divorced from its carnal incarnation. With the prioritisation of the spirit over the flesh inherent in such a schema, it becomes extremely difficult to delegitimise requests for "gender reassignment"  in a culture where identity is seen  primarily as a mental construct with priority over its existing its carnal manifestations. Where the spirit is separate from the flesh it's quite possible to be assigned the wrong flesh, where the relationship is hylomorphic it's impossible.

The problem with excarnational perspective is that it separates the spirit/mind from human nature and allows for the construction of mental identities independent of human nature and which see themselves superior to it. It is this mechanism with fuels the pride associated with puritanism.

While this perspective has wrecked the most havoc with regard to human sexuality it--something I want to touch on in the next post and answer Chent--it's pernicious effects on Western culture has been far and wide.

Nativism tends to see political society as instinctively originating from a people.  To the nativist, the body politic is not simply an abstraction but a manifestation of a carnal reality. Romania differs from England because the Romanians are different from the English, and these differences are apparent instinctively. Even if the laws were the same, there would still be a difference. For the nativist, Romania is not an idea, Romania is not a proposition,  it's a collection of Romanians.

But apparently nativism is bad.

Modern political theory sees political society arising from legal citizenship. Here the state is built upon abstract legal rights independent of their carnal manifestations. A man can be a Frenchman, Nigerian or Chinese or a woman for that matter, simply by virtue of the their legally constructed identity independent of their carnal manifestations. What unites is the idea,  the carnal reality is irrelevant.

Political citizenship here is not seen as having any carnal dimension as the disembodied self, in abstract, is the foundational principle of such a polity, irrespective of whether human nature recognises such a commonality.  For example, to put it crudely American political theory is premised on the notion that "inside every Gook there is an American waiting to come out" and it's never questioned  whether the "Gookiness" of the Gook puts any limits on their ability on being American. American legal theory is "colour blind" and does not see the U.S. as having a carnal embodiment. Now there are many Americans who would doubt this but no where in the constitution does race feature.

Had the U.S. really lived up to its ideals at the time of its inception I image that it would have destroyed itself or transformed into a Brazilian type of state. What made America "work" following its establishment were legislative and judicial"interpretations" which effectively "carnalised" the idea of America, through legal instruments which limited migration and unjustly limited rights to the Caucasian peoples. And even here there were immense difficulties. I'm not passing judgement on this, only recognising the facts, and it's only when the U.S. has been called to task over its hypocrisy between its founding principles and legal practice has the U.S. begun to socially unravel. The problem with U.S. and Enlightenment political theory is that ideas are all that  matter and that human nature needs to be pushed aside.

With regard to the matter of secularisation, does God give his blessing to a decarnalised theology? If not, that would explain a lot of the current state of affairs.