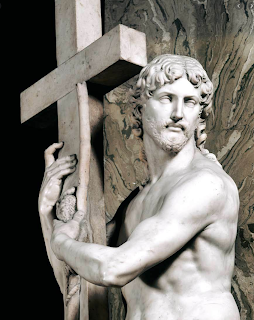 My children are politically interested but not woke and one of them, in particular, is quite cynical. This morning, over breakfast, he asked me how I would spin the Easter story if I were a Neocon.  I was actually surprised by this question as I'd never thought about this approach before.  Never mind,  the local "conservative" paper, in the form of an editorial on the meaning of Easter came up with the goods. It included this bit which I thought hit the mark perfectly:

Faith is no short-term proposition, as Scott Morrison acknowledged in his Passover message to Australia’s Jewish community last week. “From ancient times to the present day, Jewish people have been blessed with a rich identity, a deep understanding of the past, and a fierce commitment to liberty,” the Prime Minister said. “That identity enriches the lives of those around them.” He quoted the late British rabbi Jonathan Sacks: “Freedom is the work of a nation, nations need identity, identity needs memory, and memory is encoded in the stories we tell.” On Sunday, Jewish families will mark the final day of Passover, which ends after nightfall. Passover and Easter have been inextricably linked from the night Christ gathered his disciples in Jerusalem to eat the Passover meal — his Last Supper. There, he instituted the Eucharist and the ministerial priesthood and showed a supreme model for fraternal service, washing his disciples’ feet. It was the night before his passion and crucifixion.

Now, I must admit that I thought that emphasising of the Jewish component of Easter sort of missed the mark, not because there isn't a historical link between the Passover and the Crucifixion but because the "tone" of the article tends to paint an equivalence between the two. This, I felt, is disingenuous in that the relationship between Judaism and Easter is not so much "linked" as in opposition. I don't think that I'm being unjust to Judaism in stating that their "take" on Christ is in total opposition to the Christian.  Now it's quite true that there is a common historical origin of the two faiths--as there is with Islam as well--but the difference in the understanding of the role of Christ who is the central figure of the Christian faith, and his relationship to God, makes the idea of a Judeo-Christian "tradition" after the crucifixion ridiculous. Yes there is a tradition, but as I said before, it's a tradition of opposition. In fact, it would be closer to the mark that to say that there is a Judeo-Islamic "tradition" of denying the claims that Christ made of himself.

I can see the anti-Semitic radars firing up and I want to stress that this is not what I'm intending in this piece, rather I wish to point out that if you take Judaism and Christianity seriously you will see that the interpretations of the life of Christ are completely different.  The concept of Judeo-Christianity dishonors both traditions. When I see the term used approvingly by an author it's usually a sure sign that they're not intellectually serious.

The other day I was reading of how St Thomas remarked that there were other ways--beside the crucifixion-- by which Christ could have saved men but that God chose the most "fitting". And while it's true that the lion's share of the work of salvation was done on Good Friday what better way to prove your divinity to mortal men than by rising yourself from the dead.

It's a hard act to beat.

Posted by The Social Pathologist at 11:21 pm 9 comments: