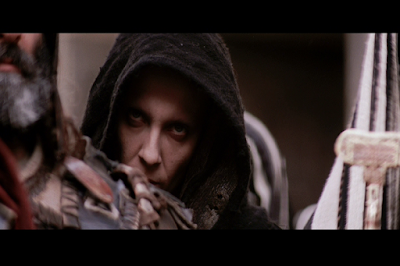 Long time readers of this blog will acknowledge that I have sparred with Zippy Catholic on the many theological issues that divide us. However I've got to commend him for two posts that he put up;

How "no enemies to the Right" perpetuates the mind trap.

HBD on its own really is Nazi.

Some explanatory comments, since many readers seem to engage in Serial Associative Cognition and impute to me positions that I don't hold.

Firstly,  It's a mistake to assume that ontological axis has, as it's opposite poles, right and left. It needs to be stressed that the ontological axis is ordered towards right and wrong and error can exist to the right and left of it and a man can stray of the narrow path in both directions.  The Master alludes to this when he says;

Enter ye in at the narrow gate: for wide is the gate, and broad is the way that leadeth to destruction, and many there are who go in thereat.

If you're like me, and believe in the existence of the Devil then you'll realise he doesn't care if you enter Hell through the Liberal door on the left or the Nazi door on the right, the only thing that matters to him is that you get there, preferably without any warning.  Indeed, one of the best ways to ignore your own errors is to be so focused on the errors of your target that situational awareness becomes lost.

I'm quite worried that this is happening to NRx at the moment. NRx is, quite rightly, hostile to the ideas of the multiculturalism, but it I don't think it has taken a critical enough stance with regard to the entryist racial supremacists who have assumed greater prominence and who hide under the moniker of HBD and identitarianism. In its battle against the left, at least on the issue of multiculturalism NRx seems to think that there are no enemies to the right.

I differ from Zippy in that I think that HBD, on its own, is morally neutral. But just as the Left engage in the semantic shifting of words, some of the more malignant Right do the same, and when they use HBD it comes with associated  metaphysical baggage as well.

Words are meant to convey a particular semantic meaning. This is recognised by the intelligent but amongst cognitive misers they words trigger an association response, much like the ringing of Pavlov's bell, and term HBD amongst this latter class of individuals is an implicit association of ideas which are linked by the focal point of race. Amongst the idiotic left, the word race triggers associations of concentration camps, discrimination and evil white men. Amongst the idiotic right, it triggers ideas of  Nordicism, racial purity, supremacism and the Darwinian struggle.

The fact that words can be used in this bimodal manner gives the Darwinian Supremacists the opportunity for plausible deniability and thus quasi respectability. When challenged about their racial supremacist stance the word is used in its semantically specific manner but when used amongst friends it is used in its associative manner.*

As I said before, HBD when used in its specific sense is metaphysically neutral and therefore not a problem for NRx. It's not even a problem, when used in this sense, for Christianity. Christianity has long acknowledged the difference between peoples whilst maintaining that they are all "one in Christ". It's current promotion of multiculturalism is due to an almost criminal lack of prudence, not a desire to eliminate differences.

Until the arrival of these entryists NRx seemed fairly agnostic on the subject of religion. However, with their arrival there's been a definite shift which I feel is going to precipitate a split. The real problem for NRx is the metaphysical one, it's about how NRx understands reality, and the entryists have shifted the balance in favour of the Modernists Darwinians. The beast now lodges in our home and NRx is being undermined from the inside.

I want to stress again that the problem is not in the recognition of the differences between races rather the associated metaphysical baggage they bring.


The fact that there are basic and intractable differences between the races is as obvious as it is politically incorrect.  One only has to look at the ethnic makeup of a professional sports team and a successful technology company to get the point.  The notion that these differences only exist because of oppression by evil white racists, and that the terrible affront of substantive racial differences can be remedied if we get even more aggressive with even more comprehensive programs of mandatory tolerance, is well past its sell-by date.

Liberalism only functions at all because it implicitly divides humanity into the übermensch and the üntermensch: the free and equal superman, self-created through reason and will, and the subhuman oppressor that is interfering with the emergence of the free and equal new man.  The free and equal new man is supposed to be politically emancipated from the chains of history, tradition, aristocracy, hierarchy, unchosen obligations, nature, and nature’s God.  But things keep getting in his way, and that requires a Solution.

If you take liberalism and force it to acknowledge the truth that racial differences are real and intractable, the Solution necessarily takes on a racial dimension.  It has to be a eugenic Solution; a Final Solution.

Anybody who has studied the Third Reich will see that the Germans did not start out wanting to liquidate the Jews, simply to rid themselves of them,  but the metaphysics of the Darwin and circumstances, forced a "logic onto them" which led to the inevitable conclusion. Behind all the smoke and mirrors class enemies and the untermensch are really just the same thing and the material concept of man leads to the same conclusion.  These entryists, whilst clothed in the language of the Right are advocating the metaphysics of Leftism.  They are nothing more than Stalin in drag.

Posted by The Social Pathologist at 12:11 am 54 comments: