He was, as I recall from Witness, and as these passages seem to confirm, recoiling from the enervation of the West. It's like a party that starts to wind down: guests leave because other guests leave. There's no future in it.

I'n all fairness to JMSmith, he has not read Cold Friday where Chambers becomes more specific in what he felt were the Crises of the West;


..... Communism manipulated them, not in terms of Communism, but in terms of the shared historical crisis-peace and social justice being two of the most workable terms.[Ed] They were free to denounce Communism and Communists (and also anti-Communists) after whatever flourishes their intellectual innocence or arrogance might choose. Communism asked no more. It cared nothing, at this point, about motives. It cared about results.

Unlike Communism, the West held no unified solution for the crisis. In face of the crisis, part of the West reacted with inertia[Ed]-inertia, in the simple term-is of the physics primer, that is, the tendency of a body to remain at rest or in a straight line of motion. But the responsive section offered a solution for the crisis. This solution, whatever differences it assumed from place to place and time to time, whatever disguises political expediency or preference draped or phrased it in, was always the same solution. It was the socialist solution. Derived, as doctrine, from the same source-the historical insights of Karl Marx-the socialist solution differed from the Communist solution chiefly in political methods. One difference consisted in the slower rate of speed at which socialism proposed to apply its solution. Another difference concerned the kind and degree of coercion that socialism would apply to impose its solution. In practice, no socialist government had yet pushed its solution to the point where full coercion must come into play. Therefore, this difference had not yet stood the test of reality. Otherwise, between the end solution that socialism and Communism both hold in view for mankind-the matured planned economy of the future-the difference was so slight that it would be difficult to slip a razor blade between them.

(To aid the reader, Chambers thought Communism was the aggressive variant of Socialism and Fascism its bastard brother.)

Here Chambers clearly identifies the problem of War and Social Justice as two of the main societal problems of the time. The jingoism of 1914 was replaced by an abject horror and despair by 1918 at the events that had unfolded during World War 1. The world was in turmoil and a sense of failure pervaded. The traditionalists had no solution. The punitive damages imposed on Germany by the Allies lead to some of the financial idiocy of the Wiemar republic with its resultant hyperinflation and societal failure. Bill Bonner described it thus:


Otto Freidrich described the period of German hyperinflation and its effects: “… People carried wages home in huge crates; by the time they could spend even their trillion-mark notes they were practically worthless… There was not a single girl in the entire middle class who could get married without her father paying a dowry… They saved and saved so that they could get married, and so it destroyed the whole idea of remaining chaste until marriage…the girls learned that virginity didn’t matter anymore.”“Against my will,” wrote author Stefan Zweig “I have witnessed the most terrible defeat of reason and wildest triumph of brutality in the chronicles of history.” Zweig lived through the hyperinflation in Germany during the ’20s and sold stories to survive. Later, he moved to Brazil and blew his brains out.

Brutality triumphed because civilized life was smothered by inflation. The Treaty of Versailles condemned the Huns to pay more than 47,000 tonnes of gold in reparations. Taking that amount of real money out of the economy left the Germans with no choice. They had no money left. They had to create it. Result: hyperinflation. The size of the banknotes rose with the crisis. In 1922, the highest denomination was 50,000 Mark. By 1923, the highest denomination was 100,000,000,000,000 Mark. By December 1923 the exchange rate was 4,200,000,000,000 Marks to 1 US dollar.”The German middle class was wiped out. More importantly, the handrails and guideposts wobbled, so there was nothing to hold onto and no way to know where you were going. Businesses, banks, military, police, even the government itself – everything tottered and fell down. In the tumult, war-hardened rabble rolled towards Herr Hitler like loose nuts.

They weren't just rolling to Herr Hitler, they were rolling to the Socialists as well. Chambers, who was visiting Germany at the time, saw it first hand [Ed, shortened for brevity]:

For the inflation was on. This was something the like of which Americans were to know nothing until some seven years Iater in the Great Depression. As an American I had traveller's cheques so that the inflation struck me at first only in the preposterous exchange of a check for a massive roll of hundreds of thousands of marks, and in the necessity of eating meals early because in the matter of an hour the value of the mark had fallen again, and a meal eaten at one o'clock might cost a thousand marks more than a meal eaten at noon.  I was in a great city, one of the most orderly and organized in the world. Here, modern civilization had taken form in big solid buildings, street lights streetcars, a flawless subway, automobiles-all the externals of modern life. Behind those impressive appearances life had gone mad. I was reminded of my Grandmother Whittaker's description of an earthquake-when the underpinnings of a world give way, the walls fall out and pipes writhe up from the surface of streets like snakes That had happened in Berlin and all over Germany But the solid form of things stood firm. The earthquake was invisible or visible only in its effects on the victims.

Well-dressed people walked back and forth on the Kurfarstendamm, like any Fifth Avenue crowd. Suddenly, the tears would stream down a woman's face simply as she walked along-the face of desperation, which asked and expected neither pity nor help, for there was no pity or help because there was no hope. The commonest of sights was to see someone snatch a purse and disappear in the crowd which rushed together for a moment, attracted by the victim's cries, and then walked on again with a shrug.

Sometimes I saw another aspect of the crisis that was even more baffling. There would be little knots of furtive figures selling newspapers at some of the street corners. At the appearance of a green-clad policeman, they would break and run. I was told that they were Communists. The Communist Party was outlawed. They were selling Die Rote Fahne (The Red Flag). I did not know, of course, that the party was even then stockpiling rifles and machine guns for a revolution that was scheduled to break out in the autumn.

Germany was an extreme case where societal problems had become pressure cooked.  But even before the First World War, the massive migration of the tired, poor, huddled masses from the Old World to the New, when sea travel was far more precarious than plane travel is now, showed just how miserable life was for those who left the Old World. The problems of intractable wage poverty, (i.e people who worked long days yet were not able to escape poverty even with thrift), and the effects of the war in terms of the disabled and dead were felt everywhere. These were societal "fault lines" which gave modern ideologies their allure. But there were other fault lines as well. Racial issues, the role of women in society, issues with regard to contraception and so on. Traditionalism failed because the solution to the problem was to go back to the state of affairs which caused the problem in the first place, the traditional world was unable to adapt and was bypassed.

Conservatism failed because it became hidebound to traditionalism.

George Grosz and Otto Dix captured the mood of the times. 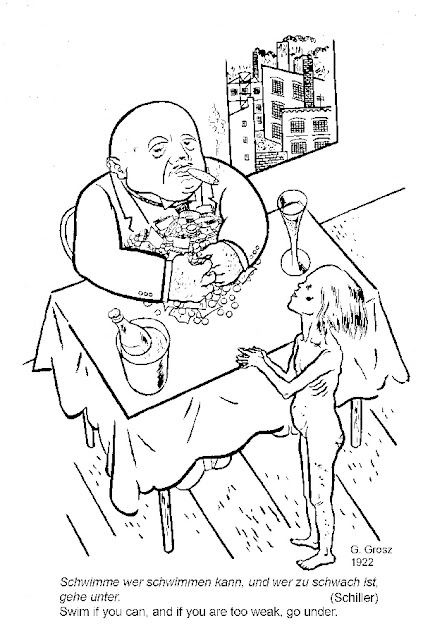 (Could be a motto for the doctrinaire Austrian economists)
Posted by The Social Pathologist at 12:39 am 8 comments: