Intelligence is not Rationality.

Unlike most of the HBD crowd, I don't hold IQ in nearly the esteem that they do. Medicine attracts a lot of highly gifted people, people who still manage to do incredibly dumb things. Still, any fair observer of the literature out there cannot but agree that IQ is a strong correlate to worldly success.

It's therefore with some interest, that I've had the pleasure of  acquainting myself with the  works of Dr Keith Stanovich, Professor of Human Development and Applied Psychology of the University of Toronto, who has much to say on the subject of intelligence and rationality.

Here is an easy-to-read article he wrote for Scientific American.

There is a good YouTube video of him presenting his ideas. (Warning, it's about an hour and a half long). His use of George Bush in the early part of the video, as an example of the limitations of IQ testing--Bush was reputed to have an IQ in the 120-130 range--is reason enough to watch it.


He also has a home page where numerous papers of his are available for those who are interested.

One of the very surprising findings of his research is that high IQ, is in many instances, either weakly or not at all correlated to rationality, as it appears that high IQ individuals are just as able to irrationally "solve problems" as their low IQ peers.  The cause of rationality failures amongst the high IQ crowd seem to cluster around cognitive biases, information lack and "cognitive miserliness ". There also seems to be some evidence of cognitive limitations in rationalisation. All in all he provides a convincing, and more importantly, empirically justifiable argument.

There is also a kindle version of his book, What Intelligence Tests Miss. I'm off to read mine now.
Posted by The Social Pathologist at 10:39 pm 8 comments:


Have you considered Jonathan Haidt's examination of the moral reasoning of "liberals" and "conservatives"?

It dovetails with your concerns about overoptimization for one set of priniciples.

Whether by custom or nature, liberals tend to overoptimize for the "caring" and "fairness" virtues, while conservatives have a broader moral palette.

This suggests to me that liberalism is the default governing morality for a diverse, commercial society in a time dominated by global trade.

And so our policies end up being set by specialists in equality and utilitarian analysis, with traditionalist concerns going by the wayside.

I'd like to thank KJJ for the link to Jonathan Haidt, whom I'd not heard of before. Haidt's specialty is the psychology of morality, particularly with regard to how people come to moral determination. He began by analysing the moral codes of many different cultures and was able to identify five common meta-themes. They are:

Haidt notes that the meta themes had different functions. Care and fairness seemed to related to our personal relationships with one another, whilst loyalty, respect and purity are group binding virtues.
Now, he is not the first person to have identified these themes. C.S. Lewis, in his book the Abolition of Man, recognised  this concordance amongst religions which he described as the  "Tao of Life". (He had a few more categories than Haidt). What Haidt notes is that loyalty, respect, and purity are virtues necessary for group binding. But what Haidt then proceeded to do is analyse how liberals differ from conservatives when it comes to moral determinations. The result is fascinating : 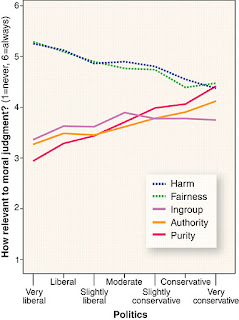 Now, Haidt doesn't ask why liberals are less "parametric" than conservatives, he simply registers the fact,  but it does demonstrate that there are different cognitive process which separate the two.  Now, it's my theory that multiparemetric analysis is computationally intensive and a high "broad" IQ is harder to achieve than than a "thin" high IQ. It would appear that there is now some evidence for this hypothesis in an experiment performed by Wright and Baril. In this experiment, conservatives defaulted to a liberal morality when they were intellectually distracted or cognitively exhausted. In other words, conservatism is a computationally intensive exercise. Liberalism is intellectually undemanding.

Haidt gives a very good talk on the subject here.  It's well worth the look.
Posted by The Social Pathologist at 12:24 am 10 comments: