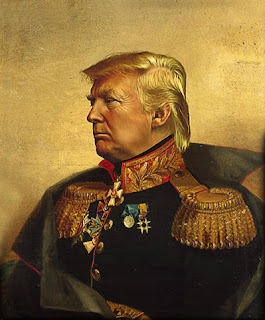 Roissy today put up an interesting post with regard to the matter of Donald Trump. What's been interesting to see, at least from this side of the bigger pond, is just how much opprobrium Trump is getting from other "rightists" and from the Cathedral.  The supposedly Mordoch *"right wing" Fox News Network has been pretty hostile to him and  its actions confirm my view that it is a false flag operation of the Left, designed to provide prolefeed to the cognitive misers of the Right.

I'm not a big fan of Mr Trump for a variety of reasons which are not necessary for the purposes of this post, however, I admire him for his charisma, personality and his "alphatude", something the other runners are completely absent of.

Pious Christian types seem critical of his moral behaviour but what these types fail to recognise is that moral goodness and the skill of governance are independent variables.  The clearest example of the fallacy of this conflation came with Jimmy Carter, who was by the standards of politicians a morally upright man though a hopeless president. The problem for Christian critics of Trump is that there is no alternative to him who is both morally good and politically competent. Sometimes you have to chose the best from a bad bunch.

The heat that Trump gets from his other GOP hopefuls is another matter all together. As far as I can see, their main line of attack is to label him as not a nice man with regard to minorities. The operative word here being "nice".  Niceness, apparently, being a principle virtue desired amongst presidents whereas competence seems to be a secondary issue. As I've said on this blog before, it's important not to conflate the good with the nice.

This virtue of "niceness" is something that seems particular to Anglo-Saxon cultures. As someone who has straddled several European cultures it's been my observation that niceness is a higher virtue than goodness in countries with a predominantly Protestant Anglo-Saxon culture. Likewise, disagreeableness or offensiveness is seen as one of the greater vices in this sphere as well.  It's no surprise then that political correctness holds such power in this domain, for  the effectiveness of political correctness lays in its ability to co-opt preexisting social norms to further political ends.

For political correctness to work there must be two elements;

1) Firstly, a political body which claims personal injury through offence every time some point is put forward which they disagree with.
2) Secondly, a culture which values non-offensiveness above all else.

I want to dwell on this second point. In the Anglosphere particularly, modes and norms of behaviour were copied from the English, who until the mid 20th Century were the pre-eminent economic, military and cultural power on this Earth. The ideals of the English Aristocracy were aped by all who strived to achieve a higher social standing. So the morals and manners of England became the standard by which all others were judged and it was ideal which was highly emulated in other non-Anglo cultures as well.

Cardinal Newman*, a High Church Anglican intellectual of Oxford,  who eventually converted to Catholicism, gave perhaps the best description of what it meant to be a gentleman.


It is almost a definition of a gentleman to say he is one who never inflicts pain. [ED] This description is both refined and, as far as it goes, accurate. He is mainly occupied in merely removing the obstacles which hinder the free and unembarrassed action of those about him; and he concurs with their movements rather than takes the initiative himself. His benefits may be considered as parallel to what are called comforts or conveniences in arrangements of a personal nature: like an easy chair or a good fire, which do their part in dispelling cold and fatigue, though nature provides both means of rest and animal heat without them. The true gentleman in like manner carefully avoids whatever may cause a jar or a jolt in the minds of those with whom he is cast; — all clashing of opinion, or collision of feeling, all restraint, or suspicion, or gloom, or resentment; his great concern being to make every one at their ease and at home. He has his eyes on all his company; he is tender towards the bashful, gentle towards the distant, and merciful towards the absurd; he can recollect to whom he is speaking; he guards against unseasonable allusions, or topics which may irritate; he is seldom prominent in conversation, and never wearisome. He makes light of favours while he does them, and seems to be receiving when he is conferring. He never speaks of himself except when compelled, never defends himself by a mere retort, he has no ears for slander or gossip, is scrupulous in imputing motives to those who interfere with him, and interprets every thing for the best. He is never mean or little in his disputes, never takes unfair advantage, never mistakes personalities or sharp sayings for arguments, or insinuates evil which he dare not say out. From a long-sighted prudence, he observes the maxim of the ancient sage, that we should ever conduct ourselves towards our enemy as if he were one day to be our friend. He has too much good sense to be affronted at insults, he is too well employed to remember injuries, and too indolent to bear malice. He is patient, forbearing, and resigned, on philosophical principles; he submits to pain, because it is inevitable, to bereavement, because it is irreparable, and to death, because it is his destiny. [ED]If he engages in controversy of any kind, his disciplined intellect preserves him from the blunder.

This gentlemanly ideal has a lot to recommend to it but in essence it boils down to one of cultivated passivity and service to others. Fair enough, but how compatible is this idea with Christianity, especially a Christianity that has to preach the Gospel amongst umbelievers, some of whom would be mightily offended? Is he a Gentleman first or a Christian second? What is a gentleman's duty to the Truth when it offends? Because by definition the Gentleman never offends, he withdraws.

Because as I see it, many Christians, especially those of the right wing variety are gentlemen first and Christians second. To them, offending a minority or a woman is more  of a sin than keeping silent about the truth lest ones behaviour be called uncouth.

The Mangina defence of MegYn Kelly is a case in point. Trump's put down of the the fair maiden was more vile than the fair maiden's abuse of her position as a journalist amongst many, particularly of the religious right.  Kelly, disabused her position as a journalist by trying to trap Trump in a "gotcha" moment, yet this is percieved amongst our religious wowsers as exusuable whereas a wude word is not? Christ's disciples, eh?

The primary duty of a Christian is to live the Gospel and proclaim the truth, no matter how offensive it is.  Sure, tact should be used when prudence calls for it but keeping silent simply by the principle that one should never offend effectively stops it expression. Hence, we arrive at the current situation where there are huge cultural problems which we cannot deal with out of fear of causing offense.  Furthermore, the Right self polices through unthinking adherence to the gentlemanly ideal being co-opted, allowing the Left to solely determine what is offensive or not.

As Christians, I think in many ways we need to revise the ideal of the knight. Of the man who could put on the hurt when he needs to but otherwise strive to be a man of peace. I'm no big fan of Trump, but from this perspective, he is more of a knight than a gentleman.

I don't know if Trump will become president or not but his greatest legacy may well be to reinvigorate the Right and ushering in a new age of assertiveness, finally ridding us of the "gentlemen" who would never offend anybody.


* Yes, I know it's Murdoch but Mordoch seems more appropriate.
* Newman may have his faults but he was also a superb intellect when it came to matters with regard to conscience.

Posted by The Social Pathologist at 11:41 pm 12 comments: