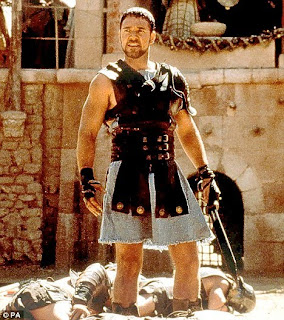 Continuing our analysis of Game and its relation to Aristotlean/Thomistic tradition, I want to raise the issue of something I've been musing about over the past few days. Now,to recap, according to this tradition a thing is good insofar as it conforms to the way it is is meant to be. For example, a perfect car has no faults, but a car that has a few minor scratches and dents is deficient in someway to the perfect car and is said to be privated with respect to the ideal; it's got some faults. Now that car can still be good enough to buy even though it's got a few faults( such as the scratches) but the more faults that the car accumulates the "less good" the car becomes. Finally the point is reached were the car is deficient in some way that makes it a bad car. Faulty gear box, cracked cylinder head and so on.

Now according to Christian tradition we are good insofar as we are free from sin. Our acceptability to God is in many ways like the acceptability of a car. We will still accept the car with minor faults, but will reject it if the faults are grievous. The faults of human beings are our "sins" and the Christian tradition classifies these faults pretty much along acceptable and unacceptable lines. Venial sins are like the scratches on a car and while rendering us imperfect, God still finds us acceptable if we posses them. Mortal sins on the other hand are faults so severe that God rejects the possessor of them outright.

Now our habits, behaviours and internal dispositions are the features which make up a man's character. Now a man's spirit is reflected in his character so therefore the behaviours and characteristics a man has render him either acceptable or non acceptable to God.

St Paul, the ever helpful fellow, wishing to save as many Christians as possible and his letter to the Corinthians lists a few faults which render a man unacceptable:

Pretty comprehensive list. Now the fault here that I wish to concentrate on is effeminacy. The actual Greek word from which it was derive was malakia, which literally means "softness" and various different translators have interpreted it differently. A cursory Internet search will reveal how wide and varied the interpretations have been, frequently to conform to the interpreters own personal agenda.

I think its fairly reasonable to assume that in order to understand the meaning of a word it is important to know how the word was used and so a brief understanding the ancient world's concept of "softness" is needed.

The ancient world placed a great emphasis on a man's moral strength, his ability to do the right thing no matter what the circumstance. Indeed, in St Thomas's reply to the objections(in the malakia link) he mentions that failing a test under heavy tribulation is pardonable while failing to put up any sort of effort is morally repugnant. It's interesting too, that in that bloodthirsty arena that made the ancient world, too much sex was seen was seen as a sign of weakness and a hedonist who practiced too much heterosexual sex was seen as malakoi. Perhaps its most accurate translation lays in the concept of sacrificing principle for pleasure. The Ancients thought that inappropriate amounts of pleasure seeking was as just as much a sign of weakness as was an inability to bear a certain amount of emotional pain. Hedonists were given short shift in the ancient world.

The ancient concept of manhood associated itself with a sense of dominance and control; not only of one's enemies and family, but of one's self. The man who couldn't control himself and who surrendered himself to emotion or circumstance was seen as weak and effeminate. Masculinity was not so much an anatomic fact but a psychological state of being. Female prostitutes and seductresses were seen as manly since they behaved like men in that they were actively seeking sex. Today's homosexual community thinks along the same line assigning partners in a homosexual relationship either a "butch" or "femme" role.

The morality of the Romans, who were pretty liberal even by today's standards, was pretty harsh when transgressed. Roman men were on the top of the social heap and as such he was expected to take the dominant role in sexual relations. To a certain degree it really didn't matter whom a Roman took to bed, what mattered was the position one assumed in the sexual act. Romans did not feel that homosexual acts compromised a mans masculinity, what compromised it was assuming the receptive position, or in other words, assuming the feminine role in the sexual act. They tended to view sexuality in terms of social structure and power dynamics and the Roman citizen who assumed the role of the receptive or submissive partner in the sexual act was seen with utter contempt. Submission was the vice of the weak; mastery, the virtue of the strong. Since the Roman male was meant to be strong, voluntary submission was seen to be a repudiation of manhood.

It should not be thought that this concept of psychological dominance only applied to the sexual arena. The Romans like the Greeks also believed that giving in to your fears or pleasures made you "soft." A man who fled in battle was not only a coward, but soft. So was a man who failed to attend his duties due to an inordinate love of pleasure. He had yielded to his sensuality. He failed.

The Romans had many slurs for this type of man but the Roman and Greek words for this type of "softness" were Molles and Malakia. They seemed to have the same connotations as in today's use of the terms: "pansy" ,"fag", "mummy's boy" or "wuss". The terms conveyed the idea of a man without masculinity. It's also interesting to note, that the Romans thought that a man who pursued normal heterosexual pleasure excessively part of this group. Today's players would have been considered "fags": Beta's in Roman society.

The man weak( as women are weak) in self control, in resisting pleasures, will be pathic:the texts reveal a complex of overindulgence in wine food and sex. Thus, paradoxically from our point of view; the man obsessed with women is passive; hence the well-known picture of the cultus adulterer, for whom we have our own curiously ambiguous phrase "ladies man".

Now the Greek term for "softness" from which the English translation "effeminacy" is derived is Malakia. is Now some translators of the Bible--and it really is quite interesting to see just how many different interpretations there are--have translated the term malakia as "receptive male partner"or "male prostitute". I'm not so sure about these translations since the Greeks and Romans already had a specific terms for that type of individual; cinaedi and pathici (Gk. kinadoi--literally meaning arse shaker), why use a general term when a more specific term was available? St Thomas's commentaries on the passage also seem to indicate a moral weakness rather than a specific sexual act. Why is this important?

What I think Paul(And St Thomas) were getting at was the condemnation of the common characteristic which characterised these deviants. Not only was the act despicable but so was the moral quality quality which allowed the man to perform the act. Paul was condemning "softness" of character. A man was meant to resist vices and not placing demands upon yourself to live according to the ideals of masculinity was a sin which excluded you from the kingdom of heaven. (Note too, that what Paul wasn't condemning was the desires, only the choice of not resisting them) Trying to translate the term into a specific instance of "softness" missed the point.

Paul was condemning men who don't act like men but he seemed to be condemning it within at least some of the ideals of classical masculinity and by doing so condemned a whole host of "deviancies" in one stroke. St Paul would have viewed a man who subscribed to the modern feminist inspired ideals of masculinity as having the same moral fault as assuming the man submissive position in the sexual act. (For those of you who think Paul was happy with men assuming the dominant position in any sexual act the next term in his list of condemnation specifically condemns male same sex acts. He was consistent) For a man to be a proper man he had to live according to the ideal and not sacrifice the ideal for any supposed comfort.

The man who sacrificed his dignity for regular access to sex, "marital harmony" or an attempt to make his wife happy all the time would have been as contemptuous to him as to the Romans; the man would be considered "weak". The man who let the woman wear the pants for whatever reason was malakia or molles.

This did not mean that within the Christian vision that the man was meant to arbitrarily lord over his family and that the woman was some chattel which he could use as he wished, rather it meant that he was in control of the marriage all the time even if it meant lots of work or responsibility was delegated to other parties. The Christian man was quite happy to let his wife run the family affairs but it was his duty to step in and take command if things started to go wrong. He did not cede power in a relationship, he delegated it. Moreover, this power over the household was given in the context that the man was responsible for the psychological, moral and material well being of the family. A man was given power in order adequately serve the interests of his family, not himself: all the while maintaining his dignity and masculinity. The Christan man had inner strength as so as not to yield to his passions and do the right thing always. The term used by the Seduction community for this type of virtue is "inner game", a moral quality self-control over ones emotions, to the extent that one will not sacrifice their dignity for the sake of female pleasure.

The current problem however is that western culture has been profoundly influenced by Feminism and limp wrist versions of Humanism and Christianity. Furthermore, with the effective banishment of the transcendental from the contemporary culture, the imperative in life is hedonistic. Men have become slaves to their sensuality, with the result being that many men today are devoid of masculinity. (This topic is worthy of a whole post which will be done later) Simple markers of masculinity are devoid in many men: the ability to fix and do things, hold down a regular job, be emotionally continent(When did crying and hugging become acceptable?), excessive concern about their appearance and engagement in the civic life are all absent. Instead the average western male devotes his time to "looking good", screwing around and spending days on X Box. We don't need to guess what St Paul would have thought of such men.


Posted by The Social Pathologist at 9:04 am 5 comments: