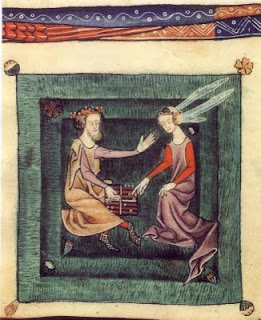 The great glory of St Thomas was that he was able to form a synthesis between Christian Theology and Greek Philosophy, with that in mind we will now attempt to look at Game through the Christian light and within the spirit of Thomism.

And the Lord God said: It is not good for man to be alone: let us make him a help like unto himself. Gen 2:18

It is a small passage from the Bible but viewed in light of Greek philosophy full of profound significance.

Now a Christian man is supposed to possess Charity. In the Aristotlean sense, Charity is directed toward the perfection of things. Charity seeks to "un-private" the thing to which it is directed. Now Charity in a man is not only directed to things outside himself but to himself as well. Therefore a Charitable man will seek the ridding of his imperfections.. Hence it would imply that activities directed towards finding a mate are a good, since the remedy of a privation is a good.

It also follows that the "goodness" of a remedy is in proportion to the degree in which it is restorative of the privation. Now as traditional dating advice has pretty much been a dismal failure when it comes to finding a mate, whilst Game has been enourmously successfull, the Christian interpretation of Game is that it is a moral good.

Now the Christian commandments do not permit fornication. For the simple, that means pre-marital sex. Picking up girls is a moral good, taking them to bed outside of the context of mariage is not. It follows therefore that Game is permissible insofar that it facillitates male female interactions withing the context of the Christian moral norms.

Game however should not be thought of as a "pickup technique", rather as an applied knowledge of the understanding of the female psyche when it comes to what women regard as sexually and emotionally attractivenes. Attractiveness being the trait that draws one to the thing which possess it, it follows that a quality which maintains attractiveness are traits which are going to strengthen the marriage. The Christian perspective of marriage is that it is institution which has both a unitive and procreative purpose through which man finds happiness. An unhappy marriage is a marriage that is privated and hence things which "un-private" the marriage are to be considered moral goods. Game practiced to strengthen the marriage is a moral good.

Comment 1: Now a man may remedy his privation by companionship with others rather than females but we know that there are enough biblical injunctions against homosexuality to know that is not an option. So a man is left with two choices:

1) Either find a woman.
2) Find God. i.e live the consecrated life.Note it should be noted that only deliberate celibacy is meritorious since it chosen state in which a man seeks to come closer to God. Not getting any because you can't is not celibacy, it's famine.

Comment 2: It also follows that a man who is not looking for a mate is somewhere deficient in Charity, since that man is lacking in the remedial impreative to of his privation. MGTOW (Men Going Their Own Way) men who have renounced the companionship of women could be seen as acting without charity. In a Christian sense they could be said to be sinning.

Comment 3:Since the remedy of a privation is a good thing in itself, since it restores the defect to its perfected in nature, it follows that human companionship is a good; especially female companionship. The Misogynists view that is contrary to nature and hence sinful. Criticism of sex specific morally repugnant behaviour is not Misogyny. Misogyny is the hatred of women, not the hatred of sex specific moral failures.

Comment 4: Since a mate must come to us voluntarily, it follows that a man infused with charity will act in such a way to make himself attractive to a mate, failure to do so shows a lack of charity.
Posted by The Social Pathologist at 1:03 pm 1 comment: