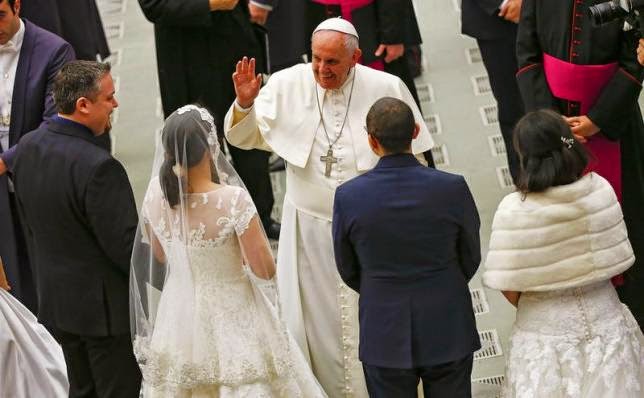 In further proof that the Traditionalists are the intellectual equivalent of Liberals, only at the opposite temperamental pole, Pope Francis, who is "persona non grata" amongst them, has once again confounded expectations by laying the boot into Feminism and Gender Theory. Quelle Surprise!

In his THIRD condemnation of Gender studies during his Papacy, Francis makes a shout out to the Manosphere!


The marital and family bond is something serious; it is for everyone, not just for believers. I would like to urge intellectuals not to abandon this topic, as though it had become secondary to commitment in favor of a freer and more just society.

To be quite honest though, Francis once again goes into traditional Platonic Love mode.

Perhaps a better solution would be for men to act like men and women to act like women and then do the talking. This implies knowing how to act like a man and knowing how to act like a woman something which the Church itself has considerably muddled.
As I've argued in previous posts, the Church has in many ways been the midwife of Gender theory by pushing a view of human sexuality that downplayed the carnal component of it. Eros became desexualised. The moderns, simply took the cultural capital they inherited and amped it up, and the way to look at Gender theory is that it is a type of Platonic love only on steroids. Spirit disconnected from body as opposed to Aristotlean hylomorphism where spirit and body are one. You Churchy types reflect on The Word made Flesh for a moment.

Pope Francis seems to be proof that the Traditionalists will do all the possibly can to let the Liberals win. The Liberals are the Catholic Church's Sefton.

I don't agree with all the things that Zmirak says because I don't think Francis is an enemy of the Right, he's opposed to Traditionalists.  The way to think about what is going on in the Catholic Church is not a Right/Left dichotomy rather, it is a Tradtionalist/Right/Left trichotomy.  With the Trads and the Left both working to undermine the Right.

Perhaps we have our first Reactionary Pope.
Posted by The Social Pathologist at 10:44 am 16 comments: