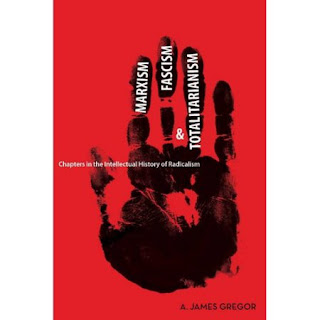 In retrospect, what becomes evident is the fact that by the last years of the nineteenth century, there was little that might count as a single and definitive "orthodox Marxism." So rich in ambiguity and discontinuities was it that by that time at least four principal variants of Marxism could be identified: that of Bernstein and Woltmann in Germany,. the critical deconstnictionism of Benedetto Croce in Italy, and the ethical reformism of Sorel in France.

Blogging has been light recently because I've been trying to catch up with some reading. One of the books I had a chance to read was  A. James Gregor's, Marxism, Fascism and Totalitarianism.

Firstly, let me say that this is a superb book and should be required reading by anyone on the Dissident Right.  Quite simply it should be a foundational text. It's that good. Gregor is a professor of Political Science at Berkeley* and is one the worlds foremost experts on Fascism, particularly Italian Fascism and Marxism.  The book is not particularly long--400 pages--it is clearly written, conceptually precise and Gregor's habit of repeating the main points at the beginnings of chapters a great way of reinforcing the main ideas he is trying to get across. For people who are time poor, it's an excellent and clearly written overview on the subject of Marxist doctrinal development.

One of the things that depresses me endlessly is the right's "tolerance" of Fascism. While many think it extreme, they see it as an ally against the Left and criticise those who "punch to the Right".  The problem is that the Fascists were never of the Right in the first place, and their embrace of nationalism is simply a mechanism to bring socialism to fruition.

In the Socialist world of the 19th Century, Marx and Engels functioned as almost defacto dual papacy defining Socialist doctrine. Socialists who differed on doctrinal points would appeal to the two for guidance given that many of Marx's concepts were vague and not fully though out. Furthermore practical experience with implementing the revolution came up against real world difficulties which had to be worked out. With their death, this guidance was gone and Socialists, much like Christians interpreting the Bible, began to fissure with regard proper interpretation of the Master.

The big issues upon which the Marxists differed were on the subject of free will, the issue of "class", leadership of the proletariat and nationalism.

Marx was a strict materialist/Positivist at that human morality and action was simply the expression of current material and economic conditions.  Marx also held Darwinism in high esteem and it didn't take too long for his followers to fuse the two and introduce race as an "economic determinant", with certain races being better economic determinants than others. The go to guy was Ludwig Woltmann, who was very influential in German Socialism and intellectually prepared to the ground for the Natsocs. (Note, Socialists really play down the role of Woltmann)

The second interpreters were those who could not accept the strict determinism of Marx and gave man more "free will" in the direction of history. Chief among this school of thought was that of George Sorel who saw decadence in the bourgeois and virtue among the "workers" and in the work ethic.  Sorel's noble worker would rise up against the bourgeois and bring socialist society into fruition. Sorel emphasised the dignity of work

But the problem with workers is that they were more loyal to their country than to class and with the advent of the First World War many socialists saw that the appeal to country motivated the masses towards revolution rather than an appeal to class. Italian socialists who admired the martial virtues of Sorel's workers realised that the best way to bring about social revolution was to marry it to the cause of Nationalism, this was the approach of Mussolini and it is here where Fascism is born.

Lenin, on the other hand, rejected any form of Nationalism as a bourgeois distraction, designed to stymie the revolution, and insisted upon a Russian flavoured internationalism which would unite the working classes.  In fact, anyone who Lenin, who thought himself the only true interpreter of Marx, defined anyone who disagreed with his view as bourgeois reactionary. I sometimes wonder if Lenin was a Puritan from New England. Stalin continued the tradition.

Gregor clearly lays the doctrinal development of each of the strands of Marxism. What's also quite impressive is the role of Italian thinkers in the development of the nationalistic interpretations of Marxism. The Italians thinkers were quite conceptually advanced in their understanding of Nationalism and offered a more "humane" version of Fascism than its Nordic cousin.  Compared to the Italian thinkers, the Germans were rubes.  It's quite interesting that Italian Nationalistic Marxism i.e. Fascism  was racially "lite" and there were quite a few Jewish Fascists among the Blackshirts.

The horrors of German National Socialism are clearly attributable to its Socialist origins which ,when hybridised with materialistic Darwinism and Ariosophy,  produced the killing machine which destroyed much of Europe and itself. Nazism was a HBD version of Socialism cloaked in Nationalism.

As Gregor shows, the only thing "Right" about Fascism is the nationalism it uses to cloak its ultimate vision of implementing a socialist society.

It's an outstanding book.

(*The Irony of the recent protests against Trump at Berkeley would not have been lost on Gregor)
Posted by The Social Pathologist at 11:46 pm 10 comments: