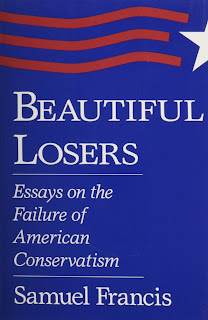 I've got to admit that while I had heard of Sam Francis before I really didn't delve much at all into his writings, and it was only a recent article and some commentary over at Radix which further piqued my interest in him, and I must admit, I've been mighty impressed. Over the last few weeks I've been reading some of his works and am of the opinion that the Dissident Right needs to pay much more attention to him.

It's a shame that Sam Francis died relatively recenetly, on the verge of the blogging revolution. Were he still alive, I imagine he would have carved his own niche in the Dissident Right and become a formidable force shaping it. I am of the impression that he didn't always agree with the tone or the official positions of many of the journals he wrote for, but given the state of affairs that existed prior to the widespread use of the internet, he was limited to writing for the increasingly few journals--on the margins--that would publish him.  Journals which, frankly, I don't think were up to his standards.

His banishment to the margins, by the forces of political correctness, I imagine was their way of denying him conventional legitimacy and smearing him as a unbalanced and someone not worthy of serious consideration.

And yet he is.

Unlike most conservative commentators who simply push for a reset to the past, Francis realises that this isn't going to happen, and if the Right wants to end it's near century losing streak its got to start doing things differently. Though coming from the Paleoconservative faction of American thought, Francis was heavily influenced by the writings of James Burnham, author of the Managerial Revolution, and this in turn influenced his analytic method when it came to understanding the sociological aspects of the liberal/conservative conflict. Burnham was an empiricist of power, both in an understanding how it was wielded and how it was gained. Francis took these ideas and placed them within the Paleoconservative context. He sought to apply these principles to analysis of the American conservative movement and his thoughts, I feel, are applicable to contemporary times.


However sophisticated and well expressed conservative intellectualism may have been in the years after World War II, its virtues did not assure it victory, mainly because there existed in American society and political culture no significant set of interests to which its ideas could attach themselves. Hence, post-World War II conservatism in its political efforts generally ignored the philosophical contributions of its highbrow exponents and fell back on the more mundane considerations of low taxes and small budgets, anticommunism and law and order; and the preoccupation of the Old Right mind in that era with an abstract and abstruse intellectualism helped ensure its eventual irrelevance. For the most part, any suggestion that the savants of the Right ought to have attended to the concrete social, regional, and ethnic dimensions of the human and American conditions rather than to their purely philosophical aspects was greeted with accusations of "determinism," though why it is less deterministic to say that ideas, rather than nonintellectual forces, are the major causal agents in human affairs has never been clear to me. The truth is that, for all their talk about social "roots," conservative intellectuals in the postwar era were often rootless men themselves, and the philosophical mystifications in which they enveloped themselves were frequently the only garments that fit them.

Alienated from the prevailing intellectual and political currents as well as from traditional social forms that were ceasing to exist or cohere, the conservative intelligentsia was able to find explanations for and solutions to the civilizational crisis it perceived only in the most esoteric theory, and the "practical" applications of such theory often took the form of some species of romanticism or archaism--a pretentious medievalism, accompanied by antimodernist posturings and colored with a highly politicized religiosity; an attraction to archaic social and political forms such as the antebellum South, the ancien regime of eighteenth-century Europe, or the era of nineteenth-century laissez-faire; and a distaste for and often an ignorance of American history that derived from a mirror-image agreement with the Left-liberal understanding of America as an "experiment" dedicated to an egalitarian and progressivist proposition. If the intellectuals of the Right did not adhere to some form of archaism, they tended, like Whittaker Chambers, simply to withdraw from the world in despair and acknowledgment of defeat.

Sam Francis was not a Traditionalist. For Francis, the old ways did not work, the task was how to win, but before doing so, it was important to understand why the losses kept accumulating, hence his book Beautiful Losers, which is essentially  both an understanding of the failure of the Conservative movement and some ideas to get it out of the cycle of defeat.  The book is a collection of essays that he had penned for various journals with an accompanying introduction explaining his choice. Most of the essays are stand alone pieces but are unified in his "Burnhamite" analysis. Francis was acutely aware of the dissolution occurring about him and was convinced that the conservative approach had to change if there was to be any push-back.

Any objective look at the state of Western Society would show that there is not much further we can go in the slouch towards Gomorrah and given the relentless Left-ward drift of society. There's not really much more time left before the "right culture" of the West becomes a memory or effectively erased. New approaches are required.


It remains possible today to rectify that error by a radical alteration of the Right's strategy. Abandoning the illusion that it represents an establishment to be "conserved," a new American Right must recognize that its values and goals lie outside and against the establishment and that its natural allies are not in Manhattan, Yale, and Washington but in the increasingly alienated and threatened strata of Middle America. The strategy of the Right should be to enhance the polarization of Middle Americans from the incumbent regime, not to build coalitions with the regime's defenders and beneficiaries. Moreover, since "Middle America" consists of workers, farmers, suburbanites and other non- or post-bourgeois groups, as well as small businessmen, it is unlikely that a new Right will make much progress in mobilizing them if it simply repeats the ideological formulas of a now long-defunct bourgeois elite and its order. The more salient concerns of postbourgeois Middle Americans that a new Right can express are those of crime, educational collapse, the erosion of their economic status, and the calculated subversion of their social, cultural, and national identity by forces that serve the interests of the elite above them and the underclass below them, but at the expense of the middle class. A new Right, positioning itself in opposition to the elite and the elite's underclass ally, can assert its leadership of alienated Middle Americans and mobilize them in radical opposition to the regime.

A new, radical Middle American Right need not abandon political efforts, but, consistent with its recognition that it is laying siege to a hostile establishment, it ought to realize that political action in a cultural power vacuum will be largely futile. The main focus of a Middle American Right should be the reclamation of cultural power, the patient elaboration of an alternative culture within but against the regime—within the belly of the beast but indigestible by it. Instead of the uselessness of a Diogenes' search for an honest presidential candidate or a Fabian quest for a career in the bureaucracy, a Middle Amierican Right should begin working in and with schools, churches, clubs, women's groups, youth organizations, civic and professional associations, local government, the military and police forces, and even in the much-dreaded labor unions to create a radicalized Middle American consciousness that can perceive the ways in which exploitation of the middle classes is institutionalized and understand how it can be resisted. Only when this kind of infrastructure of cultural hegemony is developed can a Middle American Right seek meaningful political power without coalitions with the Left and bargaining with the regime.

Eliot may have been right that no cause is really lost because none is really won, but victory and defeat in the struggle for social dominance have little to do with whether the cause is right or wrong. Some ideas have more consequences than others, and those that attach themselves to declining social and political forces have the least consequences of all. By allowing itself to be assimilated by the regime of the Left, American conservatism became part of a social and political force that, if not on the decline, is at least confronted by a rising force that seeks to displace it, even as the regime of the Left displaced its predecessor. If the American Right can disengage from the Left and its regime, it can assume leadership of a cause that could be right as well as victorious. But it can do so only if it has the wit and the will to disabuse itself of the illusions that have distracted it almost since its birth.

I imagine that Francis would have cheered the Donald Trump movement if not Donald Trump himself, though I image he would be more pessimistic of his success given contemporaneous circumstances in which his success is occurring.

I really both enjoyed and found this book thought provoking.  Over the next few weeks I plan to put up a commentary on some of the essays from the book and offer my opinion on some of his analysis

Once again, I'd recommend it and I feel that every Neoreactionary should have it on his bookshelf.
Posted by The Social Pathologist at 11:42 pm 7 comments: