Gregor on Marx and Darwinism 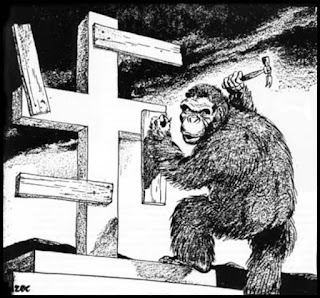 Marx recognised early on that there was a synergy between his material interpretation of history and the Darwinian theories of evolution. It was only a matter of time that the significance of human "material" would be recognised as one of the economic determinants of production.

Gregor dwells less on the Darwinian aspect of Marxism as compared to its nationalist component but, once again, he clearly shows how a moderate Marxist "racial consciousness" developed into a rabid racial doctrine once the evolutionary struggle of Darwin was fused with the revolutionary Positivism materialism of Marx. Many of the arguments made by the Marxists were similar to the ones we see today repeated by the HBD crowd and it really is quite surprising to see the the descent into rassenkampf  being recognised by Marxism's theoreticians very early on.

By the turn of the twentieth century, it was evident that Marxism was undergoing fundamental revision. Not a few Marxists were reshaping revolutionary doctrine and policy by reinterpreting some of the basic tenets of doctrinal Marxism. Woltmann was clearly numbered among them—and while the analyses of the nature of science and truth, human thought, will, and morality were issues employed in the reshaping, it was Darwinism that was to have the most radical impact.

By the time Dietzgen put pen to paper in the 1870's, Darwinism had already exercised influence on the European continent for more than a decade—and Marx himself had identified Darwinism as an intellectual activity sharing "affinities" with his own "historical materialism". In those circumstances, what Dietzgen did was to take some of the central propositions of Darwinism—"the struggle for survival; "survival of the fittest; and the conception of "progressive evolution"—and tailor them to fit what he took to he the Marxist inductive "science" of moral judgment.

In one place, for example, Marx identified "race" as one of the natural "physical conditions" that influences the productivity of labor. That productivity, in itself, was critical to social development. Somehow or other, it would seem, racial traits influenced the very fundamentals of human social life. Engels, in his fullest maturity, in the year before his death, did speak of "economic conditions" as the factor that ultimately shapes historical development, to quickly add, "but race is itself an economic factor." Woltmann pointed out that it was uncertain how such notions were to he understood if they did not allude to heritable racial properties.

While the prime motivation for Bauer's stork arose out of his recognition of the importance of national sentiment among Europe's proletariat, some of his intellectual strategies can be traced to that preoccupation among Marxists, at the end of the nineteenth century, to link the materialist conception of history to Darwinian notions of evolution. Years later, Karl Kautsky could still insist on their shared continuities. He reinvoked the memory of Ludwig Woltmann, and agreed with him—with reservations—in seeing Darwinism as an essential part of the "material foundation" of Marxism. Bauer was of similar persuasion. In his judgment, Darwinism was an intrinsic part of the rationale of the materialist interpretation of human history. In attempting to provide the most comprehensive scientific basis for Marxism, Marxists in general, and Bauer in particular, invoked Darwinism and advanced an account of human history that proceeded from biological, to social, evolution.

Engels had originally tendered the claim in a variety of publications and with a variety of qualifications. Whatever their qualifications, Marxists like Dietzgen, Woltmann, and Kautsky embraced Darwinism as an essential part of Marxism as a theory of history. While acknowledging Darwinism as a material prologue to Marxism, Kautsky complained that Woltmann had pursued Darwinism into racism.  And of course, Kautsky was correct.

Woltmann's philosophical curiosity was to propel him still further. He took his studies of Darwinism, and his allusions to the role of race in the economic history of human kind, and tied them to the moral principle that Josef Dietzgen had made the lodestar of Marxist ethics. In his final works, the highest good that shaped Woltmann's individual and collective ethics was, as it was for Dietzgen, the "general welfare of humankind"

What distinguished Woltmann's conception of the general welfare of humankind from that of Dietzgen turned on Woltmann's conviction that the biological survival and collective integrity of Nordics constituted the agency responsible for what that general welfare might be taken to he. Woltmann could affirm, with profound conviction, that if the secular progress of which all Marxists spoke was a function of the intellectual and creative talents of a racial minority of human beings, then the security, sustenance, and fostering of that race became a moral imperative of the highest order!' Its survival and expansion was the necessary condition for the production of all the welfare benefits, material and spiritual, of which Marx had spoken—and to which Dietzgen had alluded.

By the time Woltmann published his Politische Anthropologie, his heterodox Marxism had been transformed. Darwinism dominated not only his conception of human evolution, but social evolution as well. The social dynamics we continue to identify with historical materialism remained largely inviolable, but the motive force behind technological invention Woltmann identified with heritable properties—creativity and intelligence—traits he increasingly identified with select individuals and select racial communities. By the first years of the twentieth century what emerged was a political ideology that had originally found its inspiration in classical Marxism—but which, as a consequence of systematic and sustained criticism, had been so altered that it could only be identified as a Marxist heresy. Whatever that is taken to mean, it obscures the reality that Woltmann's racism was the natural child of classical Marxism. [ED]

Woltmann was not the only Marxist who traveled that path. In 1862, decades before Woltmann's "heresy"; Moses Hess, the "communist rabbi"—the person who purportedly made a communist of Karl Marx—made very clear his racist and nationalist predilections with the publication of his Rome and Jerusalem. After having worked with Marx and Engels on some of their most important early publications, with the appearance of Rome and Jerusalem, Hess was to leave them behind. In his book, Hess made the case for Jewish psychobiological superiority, to advocate the creation of a Jewish homeland in the effort to assure Jewish survival—in order that they might continue to provide benefits for all of humanity. The Marxism of his young manhood had been transmogrified in much the same manner as had the Marxism of the young Ludwig Woltmann.

In our own time, Woltmann's intimate association with Marxism is rarely, if ever, cited—and one of the principal sources of the revolutionary racism of the twentieth century thereby obscured. It was the decay of classical Marxism that contributed racism to the mix of revolutionary ideas that were to torment our time. Neither Moses Hess nor Ludwig Woltmann can he dismissed as anomalies. As the subsequent history of revolutionary Marxism was to reveal, racist and reactive nationalist variants of Marxism were to inspire revolutions throughout the doleful history of our most recent past.

I must admit that I was completely blown away by the knowledge of Moses Hess. It's perhaps one of history's most tragic irony's--in more ways than one--that the "grandfather" of the doctrine that would lead to ovens of Auschwitz was Jewish.
Posted by The Social Pathologist at 12:10 am 14 comments: