The Death of the Alt-Reich 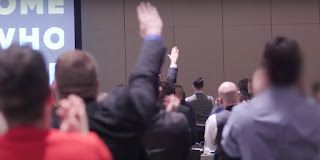 Back in 2008, when Paul Gottfried first coined the term Alternative Right, the alternate Right he was envisioning was an intellectually serious, politically active counterforce to the GOP establishment which had essentially been taken over by the Neocons. Gottfried's Alt-Right, I imagine, would be a more intellectually aggressive and politically active form of Paleoconservatism.

Spencer probably coined the term Alt-Right independently for his vision of the Right. But his vision, while promoting "white interests" seem to be far too comfortable with Fascism, anti-Christianity, materialism and 1488 crowd. Spencer the defended the quasi Nazi "pranks" of his followers with same plausible deniability with the same credibility as the New York times defended its objectivity with regard to the Presidential election.  For those who could see, it was bullshit, for those who wanted to believe, it was truth.

Part of the problem with using the same name for two different concepts is that amongst the proletariate is that semantic conflation occurs, so that everything blurs into one. To informed insiders, there were different elements of the Alt Right. To normies, the Alt-Right was just one group with a strong sympathy for the 1488'ers. It appears that it was the strategy of the 1488'ers to encourage this conflation so as to appear bigger than what they were. Unfortunately, many of the lowbrows in the Alt-Right seemed quite happy to go along, as "there were no enemies to the right".

Unfortunately, this attitude betrays a lack of understanding of what the 1488 crowd are about and reflects poorly on the intellectual aptitude on many who were sympathetic to it. Fascism, in all its variants is a modernist movement designed to appeal to right wing instincts, whilst Socialism is a modernist movement designed to appeal to left wing instincts. Both movements aimed to destroy traditional society and any conservative movement that wishes to embrace modernism is on a path to self destruction. In many ways, Fascists were the original Neocons and it was quite embarrassing to see just how many were willing to embrace right feels Modernism v2.0.

I'm proud to say that this blog called them out from the outset.

I've got to admit that whilst I disagreed with Spencer's politics I was impressed with his media acumen. But his "own goal" over the weekend simply astounded me. I could not believe he was so stupid.  His acolytes are now claiming he was framed but the fact of the matter is instead of telling his supporters, to "knock it off because some people won't understand the irony", when they did the Nazi Roman salute, he raised his glass to them. It was another Aleppo moment, mein Gruppenfurher. I couldn't believe he was that stupid.

The Hail Trump moment pretty much sealed the fate of the Alt-Reich /Right by permanently allying it with the Nazi cause.  The optics, recored for posterity and reply to argument, will forever condemn it.  A Alt-Reich will remain as there are plenty of stupid people out there, but the legitimacy it was gaining has been completely lost.

Stick a fork in it, it's done.

BTW.  Ramzpaul, who has no link whatsoever with the blog, put up a very good video on the subject.  It's definitely worth a view.
Posted by The Social Pathologist at 11:53 pm 14 comments: