How it Works: The Social Processor. Examples.

I hadn't planned to put this post up until I ran into an interesting post by bloggist Remasculation. The post, titled ""Am I allowed to think that?" Asks Wannabe Bisexual" is a delivered on cue example of the importance of "group opinion" in female cognition.

The straight girl who asked the question is in a relationship with a man who is unhappy with his gender and wants to "transition". She explains her dilemma to her peer superior:

Transitioning aside, PIV (penis in vagina) sex (which I really like) probably isn't going to happen, which for the moment I'm totally fine with. Question 4: how do I make sure I'm still ok with that, as things continue? Am I allowed to think like that?

This innocuous comment opens up a window into the cognitive mechanism of the female mind. Here is a woman in a complex social situation for which there is no apparently obvious Party approved precedent. Her social processor is flummoxed and she has lost her social bearings, effective placing her at risk of being outside the group which she dreads. The important thing is to discern the group norm and conform to it, hence the appeal to her social superior.

Never mind the fact that she enjoys the heterosexual relationship and would appear to miss it if it were taken away from her. The important thing that this girl is trying to achieve is alignment of feelings with group norms. Primitive processing is at war with social processing and her cognitive state resembles thus: 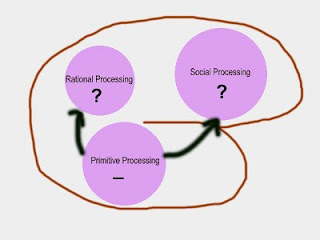 Firstly her primitive processor is definitely repelled by her partners proposed actions, but a cognitive crisis occours, since the rational processor is not receiving any stimuli from the social processor since it is unable to determine the situation. The rational processor initiates rational actions to ascertain a solution to the social question. Once the appropriate social bearings have been made, cognition returns to normal. However in the above situation social approval is combined with primitive repulsion and then it's the role of the cognitive processor to rationalise justification for the situation. 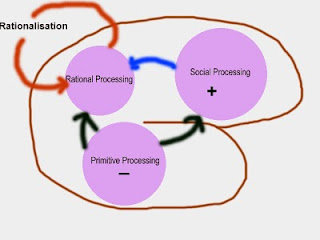 The point here is that ambiguous social standing is profoundly unsettling for most women she will endeavor to drift towards the peer group norm. Women seek safety in numbers.

This sort of stuff happens all the time even amongst women who have boyfriends with ambiguous sexuality.

Many women who are determined to breast feed feed and fail, despite painful bleeding nipples, feel failures for not conforming to the group ideal. Many women who are having a torrid time with children feel failures for not feeling the apporpirate way towards the children during childhood; our culture has effectively portrayed childhood as one endlessly Hallmark moment.
One of my left wing colleagues confessed to me that she was ashamed that she enjoyed Euro-Disney so much, given that the official left wing position is that all things American are declasse. Religious women who were taught that sex is dirty, often felt ashamed after the fact for enjoying it. Women everywhere police and judge their feelings by group norms.

Our bisexual girl will try to rationalise away her misgivings with her relationship but there will always remain a tension between her primitive nature and social expectations and should her social circumstances change, she will drop her ambiguous boyfriend like a hot potato as there is no alpha stimulation present.

I think its this phenomena which explained the great surge in divorces once divorce became liberalised. Many women were married to beta husbands but stuck with them because of social expectations, the social expectations helped rationalise away their misgivings with the relationships. With the social changes that came about post war, the social pressure to stay married evaporated and the tsunami of divorce ensured.
Posted by The Social Pathologist at 10:09 pm 2 comments: