Alt-Reich: The Black Hole of Modernism

Zippy Catholic put up a good post the other day, This is Why We Can't Have Nice Things. I've reproduced the pertinent illustration. 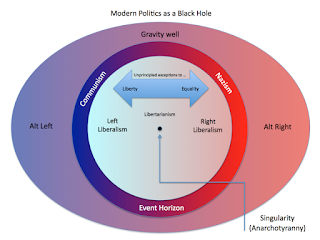 Now, while I disagree with Zippy on many things, I do agree with him wholeheartedly with this post. And it's a post I believe has relevance with respect to the the emergent Alt-Right.

There has much talk about Hillary Clinton's denunciation of the Alt-Right but I think a few definitions are in order here in order to clarify thinking for the confused. Many of the alt-Right believe that that Hillary's denunciation was specifically targeted at the Richard Spencer Alt-Reich but I think that they are mistaken.

For Team Hillary, the Alt-Right are ALL those opposed to them who don't fit into the Libertarian or mainstream Conservative classifications. Monarchists and Neo-Nazi's are therefore all grouped together as Alt-Right. Given the intellectual tradition of the Left this is to be expected yet anyone with a thimbleful of intelligence will realise that there are large ideological differences between the two. George Hawley has written an extremely good book surveying the wide variety of thought that makes up the dissident Right. Much of the thought, it needs to be pointed out, is fundamentally mutually incompatible and its only commonality is that it is neither mainstream conservative or overtly Left wing.

Hawley takes the defining principle of the Left as being a belief in radical equality. Now I have some quibbles with this definition but it's a good starting point and the Alt-Right clearly falls into this category.  However,  Traditionalist Christians and the Aryan brotherhood  are clearly lumped together under  Hawley's taxonomy but to Christians at least, this state of affairs is deeply disturbing and intuitively wrong, hence, there are problems with a system which puts us in the same political space.

This intuitive unease, in my opinion, is well founded, since I believe that that large part of the failure of the Right in the 20th Century has come about by failing to recognise who are its allies and who are its enemies and a good deal of its problems have come about through making allies with pseudo-Right groups which effectively undermine its cohesion and co-opt the it's transient political and cultural successes to the service of the Left. The problem is not one of equality, it's a problem of metaphysics.

His analysis of the failure highlighted two shortcomings or the Right. Firstly, there was failure of effective leadership which misunderstood the nature of the beast it was dealing with, resulting in its effective decapitation. Secondly, the infiltration of Neo-Conservatives into positions of power and influence ultimately undermined Reagan legacy and enabled the expansion of the managerial state which ultimately furthered the Left's aims. . Sam Francis intuitively hated the Neo-Conservatives but I never got the impression that he was really able to identify what was the ideological difference between him and them, apart from the fact that neo-Conservatives were OK with government intervention while he was not. In my opinion, Francis was never fully able to grasp the poison of the Neoconservatives because of his own ambivalence with regard to Christianity.

Like it or not, Christianity, was the dominant force in the culture of the West for the last 1900 years and anyone who attempts to explain away the role of Christianity in Western phistory is quite simply an idiot or intellectually dishonest. Christianity permeated every aspect of life including political and social theory and the underlying metaphysical assumption of European civilisation was Christian Realism.

By Christian realism, I mean, the belief in a material and "spiritual world", the belief in reason and human nature and a a value system which was ultimately upheld by God and a belief in the existence of evil. There may have been differences in the understanding of the particular points by the three main strains of Christianity but they shared this commonality. Traditional Western Conservatism had Christian Realism as its bedrock from which the rest of the social and political theory was built upon.

European civilisation was doing very well with this approach. The great turning point in Western History comes about at the end of the 19th Century and really picks up steam after the First World War. It is about this time when the 'people that matter" start ditching Christian Realism and start embracing Materialism/Positivism as their underlying metaphysic, and thus Modernism was born. 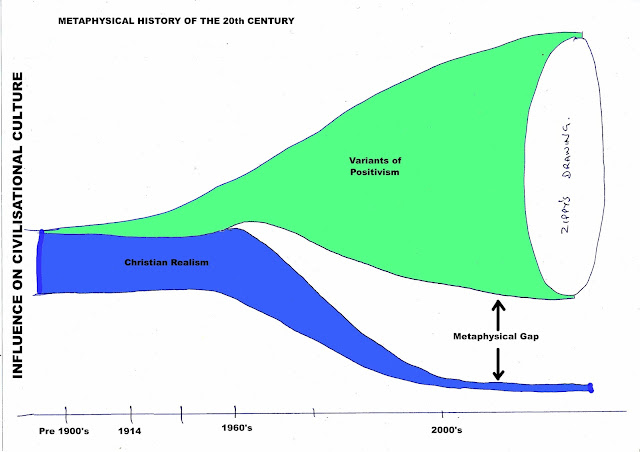 Now it's important to understand that Modernism and Christian Realism are fundamentally opposed to each other. Indeed, once you fall into the Modernist "black hole", Christian realism is beyond the event horizon and therefore cannot be reached.  Modernism, intrinsically, denies the existence of God, or his practical relevance and thus, on a fundamental level,  is cut off from traditional western culture. In the same way that Christianity marked a epochal break from pagan pre-Christian Europe.

The thing to note, though, is just as Christianity was able to incorporate such pagan traditions such as it's art, architecture, Roman law and Greek thinking, it was able to do so and remain Christian because it retained it's Christian Realist metaphysics. The modern "Right" on the other hand rejects this Christian Realism and dresses up its modernism in Christian European drag. Thus it remains modern even though looking "traditional" and lures the cognitive-lite into its fold.

One example of Modernism in "Christian Drag" was Nazism. "Got mitt uns" was stamped on every German soldiers' belt and yet the same regime persecuted Christians when convenient and behaved in a way which completely dishonored the Christian ethic. Hitler was profoundly anti-Christian yet he recongised it's importance in keeping the "sheep" under control. Germany was a profoundly religious and by-the-large stupid country and Germans were easily tricked into thinking Hitler was Divinely Providential as long as he called on Christ whist gassing the Yids. (In many ways they resembled today's Evangelicals) It needs to be understood that while the relationship between Christians and Jews as always been rocky,  "no final solution" was ever practiced or promulgated prior to modern times. Christians may have hated the Yids but they would have to answer to God for their murder. The modernist "Christian" has no such qualms.

The other example is Neoconservatism. Neoconservatism was a conservatism based on a rejection of Christian Realism, hence its appeal to (((Non Christians))) who were smart enough to see that the mainstream left was suicidal. By dressing themselves up in strong foreign policy positions, sound finances, and a belief in the traditions of America (minus their intellectual underpinnings) the sheeple of America were easily convinced that there was a continuity between its beliefs and theirs. And yet as time marches on, the metaphysics assert themselves, and we find that the Neoconservative Right more and more resembles the Left. That's because they have the same genetic/intellectual lineage.

The (((irony))) is that the Spenceresque alt-Reich shares the same intellectual lineage as Neoconservatism, and thus over time, from the point of view of Christians, will resemble the Left. In the end it will poison any "right resurgence" from the inside, much like Neoconservatism did, because it shares its metaphyiscal underpinnings with the Left. It might look different to the Left but it's made of the same stuff. The wrong stuff.

For those who are stupid, I'm not saying that the Alt-Reich doesn't have some good ideas, it's just that its ideas when formulated through the metaphysics of Modernism leads to modernist outcomes. i.e. failure or progression of the Left. Ethno-nationalism, needs to be formulated through a Christian Realist framework in order for it not become self destructive or ultimately further the Left. There's is no way to restore the glories of the past because as long as the black hole of Modernism is embraced you're trapped it event horizon from which you cannot escape.
Posted by The Social Pathologist at 11:22 am 13 comments: