I don't have White guilt and have always preferred civilization to savagery, light to darkness. Other civilizations have had their achievements, however I will maintain, no assert, that European culture, particularly Western European culture, has had a profound and beneficial effect on the rest of the world.

With that in mind, I hope to put up a few biographies of Dead White men over the next few months. These were the type of men that traditional European society produced in abundance and who so are despised by modern Lefties, because they are ashamed of their cultural inheritance. I introduce to you a man who was tough, courageous, resourceful and loved both God and country. Introducing: 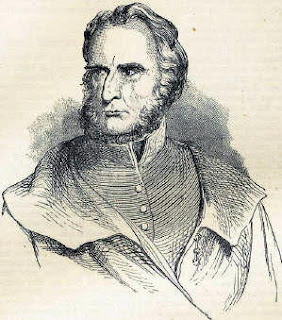 All round tough bastard, and the type of man you want with you in the jungle.

The wikipaedia entry pretty much covers his life, but I thought I would like to jot down some of his thoughts as applied to contemporary issues.

On tolerating foreign customs within his jurisdiction:

"You say that it is your custom to burn widows. Very well. We also have a custom: when men burn a woman alive, we tie a rope around their necks and we hang them. Build your funeral pyre; beside it, my carpenters will build a gallows. You may follow your custom. And then we will follow ours."

"The best way to quiet a country is a good thrashing, followed by great kindness afterwards. Even the wildest chaps are thus tamed"

On negotiating with the natives:

"Come here instantly. Come here at once and make your submission, or I will in a week tear you from the midst of your village and hang you""

On local self government:

...so perverse is mankind that every nationality prefers to misgoverned by its own people than to be well ruled by another.

And how tough a bastard was he:

He Commanded the force employed in Scinde, and on 17th February, with only 2800 British troops, he attacked and defeated, after a desparate action of three hours duration, 22000 of the enemy strongly posted at Meeanee. On the 21st February, Hydrabad surrendered to him, and on the 24th March, with 5000 men he attacked and signally defeated 20,000 of the enemy posted in a very strong and difficult position at Dubba, near Hydrabad, thus completing the entire subjugation of Scinde.

Early in 1815, with a force consisting of about 5000 men of all arms, he took the field against the mountain and desert tribes, situated at the right bank of the Indus to the North of Skihapore, and after an arduous campaign, he effected the total destruction of the hill robbers.

Check out the odds, he was no metrosexual. There would be no place for him in today's modern Britain. The country to whom he bequeathed so much glory has dishonoured his legacy. But he lives in the Pantheon of Honour; three cheers for the Dead White Man.
Posted by The Social Pathologist at 12:30 am 1 comment: