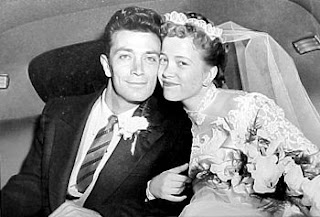 One of the blogs that I like to visit occasionally is David Apatoff's Illustration Art. One of the artists that get's mentioned quite a bit is Frank Frazetta, a quite famous artist who was responsible for giving us the image of Conan The Barbarian.  Whilst I can appreciate his art, I'm not that much of a fan of it. Frazetta died earlier this year and David Apatoff, on his requiem post, put up some works of his that I had never seen before. They were extremely moving and I think they are by far his best works. Below are a few examples which are typical of Frazetta's work. 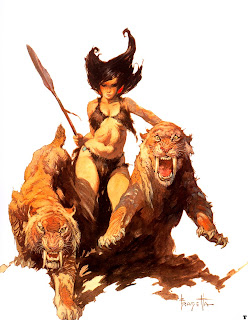 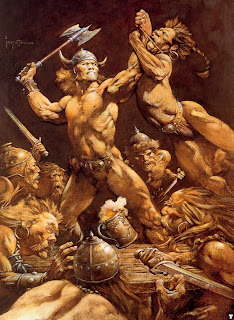 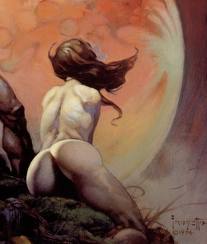 It's all very sexual, muscular and "primitive" for want of a better word. In my eyes it's competently executed but quite schmaltzy.  The overriding feeling that his work engenders is raw, powerful and latent sexuality. But most of his art was done for the purpose of illustrating comic book art so I image it, more than enough, served its purpose. However the his works which really struck me were these two: 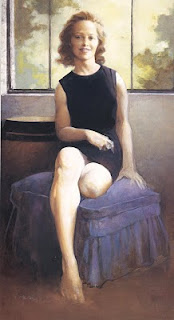 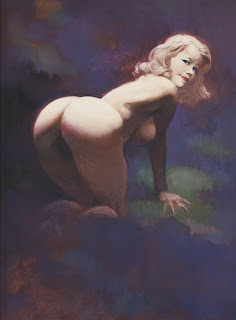 Here his work is of a totally different character. The paintings are those of his wife Eleanor, whom he loved deeply. The first image is, as my wife would say, "serenely happy". There is delight and dignity in the subject matter that is all the more striking given the contrast with Frazetta's other works. There is an absence of raw sexuality, rather its an emphasis on his wife's radiant femininity and dignity.  I think what we are seeing here is how Frazetta "saw" his wife. A beautiful, dignified, ladylike, woman whom he clearly loved.

The second image is clearly sexual, but it's sexual in a way that does not seem pornographic or dirty. Here, what we have is a rarely achieved balance of femininity and sexuality, of romantic love and sexual desire. What he manages to convey here, is not only the idea of a woman we would want to "bang" but a woman we would prize and want to be with.  Strangely, the impression this work gives me is that what we are seeing is how Frazetta saw his wife. Paradoxically, even though her eyes engauge mine, I feel like her desire isn't for me but for Frazetta.  What he's been able to capture is an intimate moment between him and his wife only, we have been invited to this moment only through Frazetta's eyes. We get to see the intimate scene through his head so to speak. (He is almost bragging)

What he saw in his wife was the perfect woman. What I think is so powerful about these last two works is that he manages to capture a masculine of view of perfect love. Both images capture the ideal, that of a woman we want to be with, and a woman who wants to be with us; exclusively.

He died a year after she did. They were one.
Posted by The Social Pathologist at 11:00 am 8 comments: