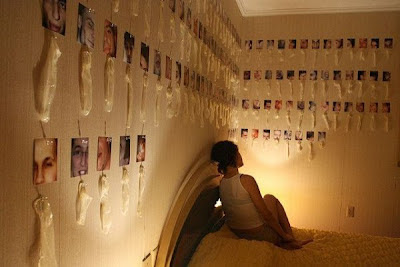 Commentator Brendan is one of the more thoughtful commentators on the internet and I have a great deal of respect for him.  Over at Dalrock's, there has been a discussion going on with regard to what constitutes sluthood and Brendan chimed in with his thoughts on the matter:


On the “what is a slut” issue, the question really isn’t about a numerical cutoff, which is why that’s generally an unfruitful way of looking at the question. A slut is someone who has an instrumental view of sexuality — that is, one who views sex in a hedonistic way for the most part. A person with this mentality towards sex will not link sex with marriage exclusively, because the view of sex is distorted and based on hedonic elements which we all know can well occur outside of marriage as well. That is, sex is about two (or more) human beings collaborating physically to bring each other sexual pleasure, and this is a “good” in and of itself as long as ‘enthusiastic consent’ is present. That is an instrumental/hedonist view of sexuality, and is the sine qua non of being a slut.

While I personally agree with a lot of Brendan's views, I disagree with his reasoning on this one. Now, I do think the number of previous partners does matter, and to be fair to Brendan, he does counsel that men avoid women who have high numbers, but the executive summary of his view seems to be that number does not mater as much as "women who think sex can occur justifiably outside of marriage". I think that this is good practical advice but the problem occurs when we get to the woman who's view of sex has changed and the the real problem is how to deal with the "reformed slut". It's a bit like the reformed alcoholic or drug addict, despite their protestations how do we know they aren't going to lapse into their former ways? Real life experience shows that many do.

The whole "my previous number doesn't matter" argument frequently touted by feminists is premised on the assumption that sexual continence is easy and its just a matter of being a simple choice.

The pleasures of the flesh, like the bottle, are source of temptation to many people. Lot's of good Christian people, who live in fear of the Lord, go to Church regularly and believe that sex is exclusively reserved for marriage, have been caught up in affairs. It's a stock staple for atheists to snicker when some Christian Pastor is caught In flagrante delicto, and attribute to hypocrisy what is in reality an act of weakness.   When it comes to the practice of virtue, philosophy is less important than habit.

This is what I think is the weak point in Brendan's argument, sluthood becomes a philosophical position instead of moniker of actual promiscuity. I mean, take the example of feminist who has only ever slept with one man. Is she is a slut? Her view of sex may be instrumental but common sense would say no. The other problem with Brendan's approach is that is that it tends to de-emphasis the importance of the actual number count, which this blog has shown before to be a far better predictor of both divorce and infidelity.

Now, it is a well known fact that co-habiting couples have higher rates of both infidelity and divorce  should they eventually decided to marry. For years the conventional wisdom was that this fact was attributable to the more liberal philosophy of the co-habitors.  A study done by Teachman, which I have linked to previously, dispelled that theory;

Now, common sense would dictate that a woman who embraces a hedonistic philosophy is probably going to be a bad bet compared to woman with a more overtly Christian approach. But this graph below will show you just how little comfort you can take from that line of reasoning. 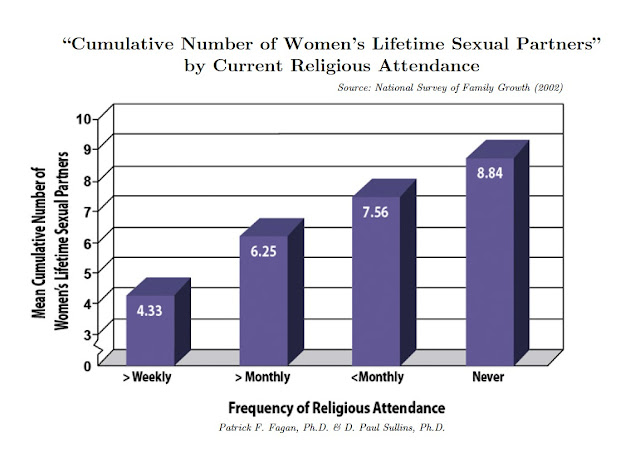 The data was taken from this paper, The Benefits of Religious Worship, by the Marriage and Religion Research Institute. They didn't do a breakdown of the different denominations in this paper, and so I imagine the conservative Christians are lumped together with the liberal ones. Frankly, I'm surprised that 4.33 is the average for weekly attenders as I thought it would be much less (I imagine the pious divorcees distort the figure). But there you go. Viva La Sexual Revolution!

Having a Christian philosophy helps but it is no guarantee against carousel riding, and even your apparently averagely pious Christian girl has gone for a quick spin. But what is evident though, is the more seriously she takes the faith the lower the partner count.  But Philosophy doesn't matter nearly as much as practice, because the greater the number of partners the greater the risk of divorce. All the studies show that a zero previous partner count is the safest bet. N matters.

The other problem with the "philosophical approach" to the definition of a slut is that it supports the bad theology of what commentator at Darock's blog called "sloppy seconds agape." The idea here is that once a woman professes her love for Jesus and repudiates her wicked past she suddenly becomes a good catch. The "theology" can be briefly summed up as "Because Jesus forgave sinners you should marry them even if they don't appeal to you". Any quite prudent reservations with regard to her marriage worthiness are dismissed as a lack of charity or too much judgement(with all the negative Christian connotations that it brings). The philosophy of Sloppy Seconds Agape conflates forgiveness with imprudence and thrives in the church's where goodness is equated with niceness. The well meaning but naive Christian young man is a sheep amongst wolves in this crowd. All forms of psychological pressure and dubious theological argument will be put on him to "man up". He will be made to feel guilty for having sensible reservations. Scripture will be quoted to make him feel bad. Appeals will be made to his chivalry.

As a Christian, I do realise people change. God's grace is transformative and I don't want to write off men and women who are honestly trying to make a change. I've known many women who have had torrid pasts and did their best to try and escape it by living good lives and being stable partners. I know players who realise that the lifestyle was damaging them and have opted out. People do change. But the habit of virtue is more important than the philosophy of it.  Before a man (or woman) invests their future, and their children's future in a spouse, a degree of prudence  and common sense is required. Actions speak louder than words.

Once again, I've got the highest respect for Brendan but I disagree with him on this one.
Posted by The Social Pathologist at 11:36 am 26 comments: