As mentioned in previous posts, the ability to elicit mating behaviour in a woman requires the stimulation of her cognitive alpha receptor. Niceness or agreeableness, whilst not off putting, are not characteristics which stimulate the alpha receptor. The neurophysiological processing which generates the sensation of "niceness" is seperate form the mating neuro-circuitry. This is easily verified in real life by the phenomena of the "friend zone". Women can and do have agreeable relationships with males such as brothers, fathers and workers without feeling the slightest sexual desire. Partner "agreeableness" may be a pre-requisite(though not necessarily so) to sexual attraction but it on its own is not enough to stimulate the alpha response.

Figuratively we can picture the mental processes as such. 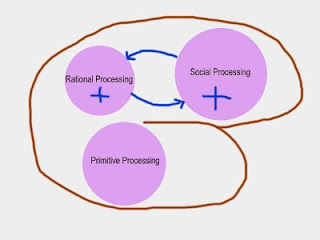 Note, in this cognitive model, the beta male may appeal on both socially and rationally but he fails to elicit any response in the primitive area. The woman finds the man agreeable(even strongly so)and may in fact place high value on the friendship but does not feel sexual attraction to the male. It's also the cognitive mechanism at play when a woman speaks those dreaded words "lets just be friends". Hence a beta male can be defined as a male who fails to stimulate the alpha receptor but retains enough positive attributes so that a woman wants to form a non sexual relationship with him.

(It needs to be remembered that just as mothers can experience difficulty in bonding with their child when exhausted, ill or under other external stresses, the sensitivity to the alpha receptor can be diminished in similar states.)

Contrast the Beta cognitive model with the Omega. The Omega male actually stimulates feelings of repulsion in the woman, 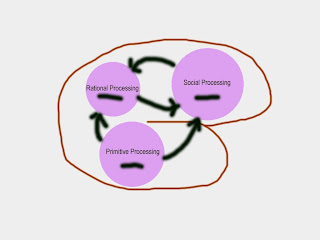 Here, not only is the primitive processing not stimulated but the primitive area sends inhibitory signals to the rational and social areas of the mind to try and break off contact. Unlike the beta male where there is no desire to break off the non-sexual relationship, the woman deliberately tries to avoid the Omega man. This in some way is a small mercy for the Omega male, for he is left in no doubt about the woman's desire not to have a relationship with him. This small mercy is not extended to the beta male. Here the woman is still quite happy to keep his company and her friendly engagement and proximity with the beta male may be misinterpreted by him as being the very beginnings of a potential sexual interest. Inevitable frustration and bitterness ensures.
Posted by The Social Pathologist at 10:27 pm 15 comments: