I'm warning the Atheists that this is a religious post. 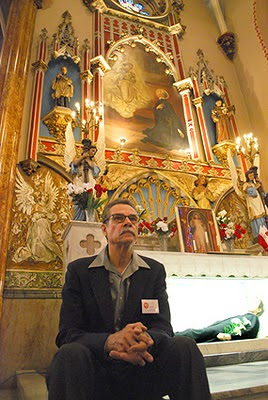 I don't think that many of my American readers realise just how hostile the contemporary cultural climate has become with regard to religion outside the U.S.  Amongst polite society, religious belief is not just intellectually mocked, but it has become a social vice, much like not washing or belching in public. The result of this twin pronged attack is that religion tends not to be mentioned at all in public discourse (except when discourse is critical of it.) Conservatives of the HBD bent--the most successful conservatives and the ones scoring the most social points--do their bit as well, denying religious insight any legitimacy(except where it is subordinate to evolutionary concerns). Amongst the dynamic conservatives at the moment, religious matters are touched briefly and with some embarrassment. The conservative argument is fought on empirical basis alone.

I suppose this areligious flavour of conservatism has its roots in the debates with the left. Conservative thinkers have tried to debate the Left on the Left's terms in the mistaken belief that while Leftist's were irreligious, they were at least objective on more worldly matters.  This view of course was false. The Left were never objective. Their objectivity was subjective, subjective to their own prejudices and they simply ignored argument which conflicted with their preferred version of reality. There was no dialogue but lots of debate. Conservatism, shaped by this endless dialogue with the Left, became publicly, practically irreligious.

This is a shame because without religious insight Conservatism is dead.

The Left is the killing the West, and thinking people of all persuasions realise that something is wrong. Detroit just one example of the malignancy of the Left disease and yet unless it is stopped, Detroit is the future for all of us. 20th Century Conservatism has the failed to stop the disease. Indeed God-lite Conservatism is part of the disease. There will be no revival of the West without a religious revival.

I've been meaning to put up this post for a while but could not find a good example to illustrate what I meant till I came upon this post. (Hat tip. The Black Death).  Amongst Detroit's cancer is something that refuses to die. (These are images of the surrounding area)

There are only 12 parishioners seated in the pews at the front. There’s room behind them for almost 2,500 more.

There’s no place else like it in Detroit. The way its tattered beauty still shows despite its age, the way a handful of people keep it going despite the challenges, the way its past was wild and sometimes even violent, it’s a lot like the city it has stood in all these years.

“This place is not only a statement about God; it’s a statement about us,” says Bob Duda, 64, part of the Polish American Historic Site Association, the group that takes care of St. Albertus. “It’s like a skyscraper — here we are folks, we’re important, just as important as anybody else. We’re going to be proud of ourselves. That’s why they built churches like this; otherwise they could’ve done it in tents*. It’s a testimony to us and our history and our heritage.

Just imagine the effort and personal sacrifice that went into the building of this church. The care and artistry that lavished upon it, a time when infant mortality was shocking, hunger real and destitution, an ever present reality.  That a bunch of peasant Polaks,  Europe's rejected, could build such a church in what was effectively the wilderness and against the odds was testimony to the power of their culture to create something magnificent from nothing. As opposed to the modern culture of Detroit, which corrodes everything it touches, their culture was a culture of vitality: The force of life.

It's this "force" that gave the West its vitality and without this force the West will die. The world has gone through prolonged periods of darkness before and on a purely logical level there is no reason why the West go the way of other cultures.

That such a church, built up with much effort, toil and sacrifice; the drama for life's great events and a thing of beauty itself, could be sold for one hundred dollars is proof that the current Catholic church is run by downright morons and cultural aesthetes. The natural way of things when governed by such men is for self destruction. That the Church survives is not due to human agency, as clearly it is manifestly lacking, but is supported by something Divine. As some cardinal, whose name I forget said, "the Devil will never destroy the Church, our own priests have been trying to do it for nearly two thousand years without success." It survives despite the idiocy of its supposed guardians.

The force that keeps this church alive is the force that shaped the West and when this force leaves this church it will die. The name of this force is caritas. In English, the word is frequently translated into the terms charity and love. But these terms do not do concept justice. The best way I can think of it as a will to perfection. (perfection in the Aristotelian sense). This force, expressed in the real world, improves upon it. Reality is not only better, but reality thrives in its action.

If I had to distill the big ideas of the West, the qualities which gave it its unique character, it would be caritas and veritas.  Of these two, caritas is more important. Without caritas, veritas is impotent. The world thrives suboptimaly when it has caritas, but caritas becomes supercharged in the presence of veritas. (The West rocked in the 19th Century, it's when the two forces became aligned in Western society) And that's is why conservatism has failed, its concentrated on the veritas instead of the caritas; it's got its priorities wrong.

Looking at Paul's letter to the Corinthians in this light, it assumes a different message. Instead of it being an exposition on love, it becomes a sociological insight. Our society, no matter how technologically gifted it is, no matter what feats it can perform, is doomed to nothingness without charity. The technological fix, no matter how well informed, is doomed to failure. The HBD movement is a dead end. That's not to say that it does not have valuable insights(veritas), but on its own it's not enough. Standing in modern Detroit, St Paul could clearly identify the malady. Where is the love? Would be his comment. Detroit is decaying because of idiocy and indifference, failures of both veritas and caritas. In a sea of desolation, St Albertus survives because of love.

Before you can save Detroit or the West, you've gotta care. Without the love, no matter how informed you are,  you don't give a shit.
Posted by The Social Pathologist at 11:22 am 58 comments: