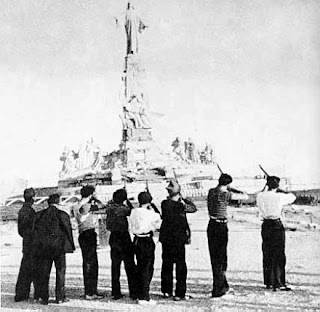 For the first time since Christianity formed souls and societies, we find ourselves faced by a public and social apostasy which is no longer merely the schism of a nation or a king, nor the heresy of a teacher or a sect, nor a political and moral revolt, but which is a whole civilization cutting itself off completely from Christianity, a civilization that must be reconquered, re-Christianized."

I suppose what I want to do with this post is lay out my understanding of the "grand narrative" of the 20th Century. In essence, my theory is that "practical" Christian Society failed in the the 19th Century and events of the 20th Century were the results of the secular attempts to build a better society.

Catholic Traditionalists are inclined to think that the serious rot in Western Civilisation began with Vatican Two, but more perceptive minds were well aware that the rot had set in well before then.  The above quote is from Maurice Blondel, written at the beginning of the 20th Century.

Perceptive Christian  minds of the time, like Blondel, realised that the society built by institutionalised Christianity was in DEEP trouble. Indeed, reading some of his contemporaries at the end of the 19th Century, one is impressed with their keen awareness of a sense of an impending transformational change about to engulf society. These authors were passionate Christians who were horrified at the progressive secularisation of society and wanted to reverse the trend and yet they realised they were up against a formidable foe in the face of Modernism.

Now by Modernism, I mean a philosophy of life that is for all intensive purposes Positivistic. And what was apparent to these thinkers, writing at the about the turn of the 20th Century is that positivism was crushing the all before it. Essentially, the history of the 20th Century could best be described as the battle of ideas born within the Positivist vision following the practical irrelevance of European Christian Culture. When Nietszche proclaimed that 'God was dead", he shouting the death of the motive force of European Civilisation.

Now it needs to be understood that understood that Fascism, Communism and contemporary Liberal Democracy are all ideologies framed within the Positivistic metaphysical system, and as such, all are a break from the European Civilisation which existed before 1914. They arose out of the vacuum that came about with the "Death of God". Sure the philosophical foundations of Modernism/Positivism go all the way back to intellectual errors in the Medieval philosophy but they only become culturally transformative after the First World War, when significant numbers of people took them on board and were able to effect their consequences.

Why people took them on board is interesting. What's really apparent in reading the authors of the late 19th Century, is the social ferment and instability in all of the European countries of the time.  Europe's population increase by four hundred percent during the 19th Century, and despite all the scientific advances, vast numbers of people were malnourished, uneducated, poorly housed and living in poverty.

Happy, well fed people don't revolt, and the fact of the matter is that many people weren't happy. Not in the Gloria Freedman sense but in the sense that their crushing poverty and limited ability to escape it induced a yearning for something better. Traditional Christianity taught them to "bear their cross" and seemed unable, with certain few exceptions, come up with any real solutions. The practice of Charity was inadequate to the needs generated by the population explosion and traditional Christianities defence of private property and the realities of lasseiz faire Capitalism meant that the social structure of society was pretty much entrenched. This left people with three options:

1) Bear your cross. i.e. Suck it up.
2) Emigrate to the New World.
3) Abandon the traditional conception of Man and Society and look for something new.
Emigration is an interesting one, and it would be interesting to see how much it contributed to the stability of the 19th Century by acting as a "pressure valve" against social agitation. But its also interesting as a metric with regard to how bad things really were in Europe at the time. Passage to the New World was not without its perils ship wreck were common and emigration was usually final, in the sense that it severed a man from his family and his past.  The fact that large numbers of people were prepared to undertake it gives some idea of the social pressures that people were under. Europe, despite its technological and cultural glories was a social mess.

Likewise the French revolution is seen as the originator of the modern world, but it needs to be understood that the Revolution did not arise ex nihilo, rather deep social problems were its gestational medium. The Revolution needs to be seen as an attempt to escape them. Had France of Louis XVI been prosperous and well fed, I doubt if there would have been any Revolution at all. Likewise, specter of Socialism only became real only after the population explosion of 19th Century Europe was able to digest it through the laissez faire Capitalism of the time, producing an exploited urban proletariat, disaffected and ripe for agitation. The ideas of the philosophes are only given an audience when times are hard.

Furthermore, the triumphs of science vastly undermined the authority of religion. Childbirth, which had roughly a 5% mortality at the end of the 19th Century was bought down to less than 1%, not by prayer but by modern medicine. Why go to the priest when the doctor is more effective. It didn't take much of a push to lure the masses towards secularism.

The point of this is that Christianity had practically failed, particularly as a social phenomenon and while people still continued to mouth religious platitudes and perform religious observances, they did so out of habit rather than conviction. When more liberty was finally given to them, especially Catholics after Vatican Two, religious practice withered.

The intellectual vacuum left by Christianity paved the way for secular solutions to societal problems, solutions which rejected the Christian metaphysic and which were ultimately positivist, and therefore modernist, in their foundation. Fascism, Liberal Democracy and Socialism are the Right, Middle, Left repesctive "solutions" to these problems but are ultimately all cut from the same modernist cloth. And there is nothing in Modernism which prevents the transformation of one to the other except perhaps historical contingency.
Posted by The Social Pathologist at 11:32 am 13 comments: