Imagine a wealthy landowner (A) who has a herd of 1000 cows. Suppose this landowner was old and pre-occupied and found it difficult to look after his herd. A fellow landowner (B) hearing of his plight offers to borrow and look after his cows and give A 5% of their milk production.

A considers B’s proposition, he is old and tired and can’t look after the cows, by lending the cows out to B he still owns the cows and gets 5% of their milk production without any effort, upon consideration and agrees, except that he wants to be able to slaughter the occasional cow as needs arise and wants B to be able to give it to him on demand, B considers this and they agree.
B is an enterprising fellow. He has no real intention in looking after the cows at all. He is interest in making a buck. The word on the street is that milk is quite profitable and that people are prepared to borrow cows for 9%. Earn 9%, pay 5%, live off the spread. The 4% of the milk is his to sell at the market, its easy money. Now he knows that C is keen on looking after cattle at market rates B however realizes that A may want some of his cattle back on demand, so B lets C borrow 80% of the cattle, keeping 20% in reserve in case A comes a calling. It’s his fractional reserve.
C accepts 9% terms. C however never intended to milk the cattle, rather he wanted to trade them for some farm equipment which he wanted to grow crops with. He thought, if I grow crops I can sell them at market, buy some milk to pay back B and still make a profit. So C swaps his cows for farm equipment which D makes.
D doesn’t know what to do with cows. But he knows that B is paying 5% milk production for the use of cows. He can live off that quite comfortably and still slaughter a few cattle as required. He gives his cows to B by agreement and on the same terms as B is offering to A. B is an enterprising fellow, he realizes lending at 9% and paying at 5% is the path prosperity so he must keep pushing this good thing. B runs around looking for other people interested in borrowing cattle. At the market B finds E, who is willing to accept the same terms at C and so on. After 5 iterations of this scenario, B’s balance sheet looks like this:

1) Does decreasing the amount of amount of cows left in reserve, increase cow supply?
2) What is the cow multiplier when a reserve ratio of 8% is stipulated?
3) Does varying the rates of return, alter the supply of cows?
4) Does fractional reserve cattle banking, increase the number of cows?
5) Are borrowed cows destroyed when loans are paid back?
6) Are cows created by fiat when loans are made?
Posted by The Social Pathologist at 11:53 pm 1 comment:

The cause and prospective duration of the current economic crisis. 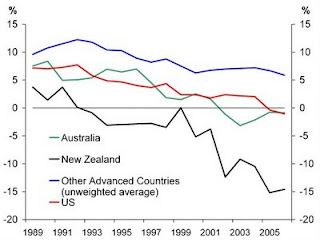 It wont get any better till savings rates are between 5-10%. Australia and the U.S. will need all the help they can get, but God help New Zealand.
Posted by The Social Pathologist at 10:05 am 2 comments:

H.L Mencken was right, democracy is the greatest show on earth. Yours truly has been following the financial meltdown and political process as a spectacle to behold. This is better than the West Wing.

However the most depressing thing that strikes me about this spectacle, is the intellectual shallowness of most of the leading participants. From the President down to Joe Average, the level of economic idiocy is truly astounding. What is so distressing is that the aforesaid morons, through our political process, determine the economic course of state. Is it any wonder that we are having a meltdown.

I suppose its no suprise, that one of the most 'stupid' solutions to the current crisis should come from the very orginisations that distinguished themselves so well in the regulation of the idiot bankers. Apparently the FASB has now decided that the troubled assets don't have to be marked to market. The wise public servants have determined that we are having a firesale--it's been going on for eighteen months--and the prices that the market is paying for the "troubled securities" are under what they are truly worth. According to wise at the FASB, the current accounting rules significantly understate the value of these assets and hence adversely affect the capital position of the banks. As I understand it, the FASB has implicitly said that the assets should be marked at a value that they would represent in an "orderly market".

What the hell is an orderly market?

I presume it means a market that gives me the price that I want for my asset.

Now Suppose I have a Milli Vanilli Cd which I would like to sell, and that currently, the CD is selling on the open market for 5 cents. I actually think in a few weeks people will be looking back nostalgically at the Eighties and that there will be a demand for Milli Vanilli songs, therefore true value of the CD will be about 30 dollars.

How do I price the value of my asset? What is fair market value? Clearly what the FASB allows is for the holder of an asset to determine the market value of the asset independent of what it has been trading for on the open market. This is just plain dumb and they type of stuff that frightens off intelligent capital. More opacity at a time when no one trusts each other in the banking system.

How the hell do you read a balance sheet when the value of assets is determine by what management thinks is a fair value, as opposed to what the asset is trading for in the open market? Do think there is likely to be a conflict of interest?

I suppose with march of postmodernism through the humanities, it was only a matter of time till it crossed over into the weakest of the "sciences"; economics and its handmaiden, accounting. If various and conflicting readings of the "text" are equally valid, and truth is a construct devoid of any metaphysical basis, it should be no suprise that when reading a balance sheet the numbers put down can mean anything we want them to mean.

It certainly makes investing in this kind of market a very interesting proposition.
Posted by The Social Pathologist at 10:20 pm 9 comments: