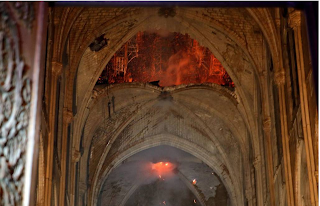 In ancient Rome it was the role of the auguries to determine the will of the Gods through the omens observed. The Romans, unlike our modern contemporaries, were religious people who felt that the Gods communicated to men though signs and phenomenon from which the carefully observant would divine their will. So firm was their belief in this state of affairs that they would not proceed with an important issue unless the God's were on their side.

By nature I'm very skeptical sort of guy, not prone to such practices, but I've got to admit that the burning of Notre Dame sure felt like an omen to me: an uneasy one. Notre Dame isn't just another Church, it's in many ways the symbol of French Catholicity--with all that brings--and its partial destruction seemed to be a foreboding sign.  Unlike many other church fires, even the atheists recoginised that the is fire had a far greater symbolic significance.

Some traditionalist wags on Twitter--wishing to prove that God was on their side-- commented that the new modern altar was buried under the rubble while the "traditionalist" one remained unscathed.  What they forgot to point out is that a lot of the old Church was destroyed and if destruction was a sign of the Divine Will,  then God seemed to be unhappy with some bits of the "old" Church as well.

Some of the more liberal commentators felt that the destruction while regrettable was a new opportunity to rebuild the Church in a way "reflective of contemporary French society".  Anyone familiar with modern architecture and contemporary politics  can only interpret this angle with a great deal of apprehension.  The French secular state has been hostile to the Church and it is not beyond the realms of  possibility that it will exert its power to "rebuild" Notre Dame in way which both asserts its authority and humiliates the Catholic Church.

Knowing what crimes modern architecture is capable of, many are calling for the Church to be restored to exactly how it was before the fire.  I'm not particularly opposed to this view, especially considering the potential modern alternatives but if this fire really was an omen of sorts then I don't think that's going to happen. This is what comes to mind;


Since the Passover of the Jews was near, Jesus went up to Jerusalem. He found in the temple area those who sold oxen, sheep, and doves, as well as the money-changers seated there. He made a whip out of cords and drove them all out of the temple area, with the sheep and oxen, and spilled the coins of the money-changers and overturned their tables,and to those who sold doves he said, "Take these out of here, and stop making my Father's house a marketplace. His disciples recalled the words of scripture, "Zeal for your house will consume me." At this the Jews answered and said to him, "What sign can you show us for doing this?"Jesus answered and said to them, "Destroy this temple and in three days I will raise it up." The Jews said, "This temple has been under construction for forty-six years, and you will raise it up in three days?" But he was speaking about the temple of his body. Therefore, when he was raised from the dead, his disciples remembered that he had said this, and they came to believe the scripture and the word Jesus had spoken. 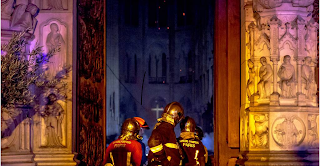 As I said before, I'm a skeptical sort of guy, but it there is any omen here, in my mind it is signifying that a change is coming,  probably through French Catholicism first. The temple is being torn down and its going to get rebuilt but it won't be a copy of the old.  Still,  I couldn't but feel looking at the photos of the old altar standing relatively unscathed by the fire that everything was going to be alright in the end. No matter what calamities may befall us, the Faith will endure.

He has conquered death and its corruption.
Posted by The Social Pathologist at 10:59 pm 6 comments: