I got a fair amount of grief from the pro-Russian crowd in my last post about the Russian Military Cathedral which I felt tried to reconcile communism with orthodoxy.  Commo-Orthodoxy much like Judeo-Christianity is fundamentally incompatible due to their foundational premises.  As I tried to point out in my last post, patria and Christianity are compatible, Communism (and fascism for that matter) is not.

The allies destroyed of confiscated a lot Nazi art following the war, and I'm not sure how much of it had a religious element. But I managed to find an example of religious art produced in a time of totalitarianism that gets it right.

Oskar Martin Amorbach was a well renowned painter during the time of the Third Reich. He painted one of my favourite works from that time, The Sower. What I was not aware of is that he also painted a mural in the The Holy Trinity Chapel in Waldsassen. The mural was completed in 1940 while the Reich was on the rise. Titled, The Descent of the Holy Spirit upon the Apostles, the mural of the German soldiers is seen as an allegory of the corporal acts of mercy. Of note, you have to look very carefully to see any Nazi imagery. The emphasis is clearly on German soldiers being good Christians. 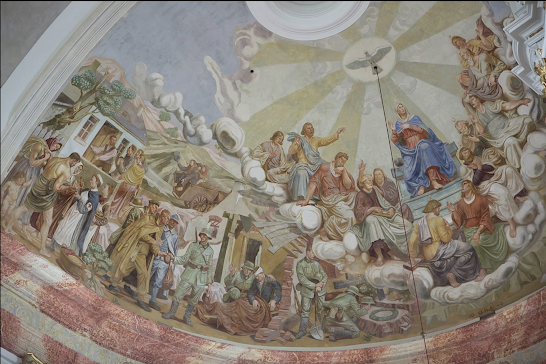 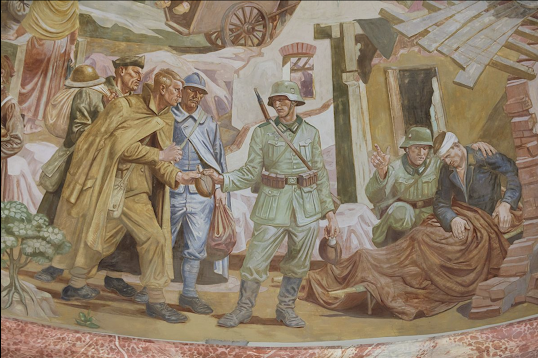 They guys are clearly Wehrmacht but it's very difficult to see an Nazi symbolism at all.  In this image we see the German give a drink to French, Italian and Spanish prisoners of War, visiting the sick... 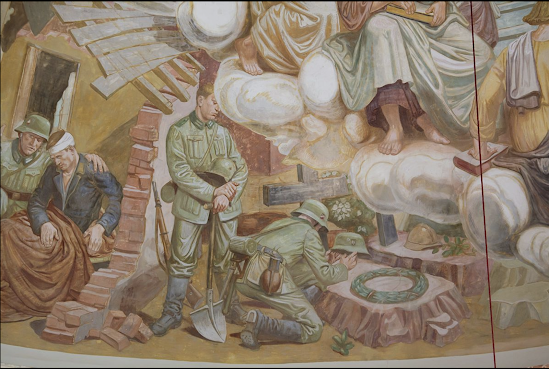 ...and burying the dead. Note, the grave next to German grave is French. The imagery is clearly one of Christian morals, rather than a celebration an attempt to reconcile Nazism and Christianity.

Even this sort of thing from another Church and from the First World War, put in a Russian context would have been  more appropriate. 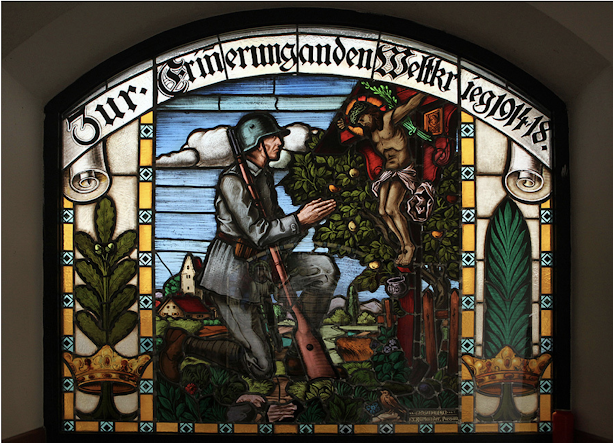 I'm not an artist, but it isn't too hard to see how faith and patria could be depicted in a way which acknowledged historicity while criticising totalitarianism.  Even some of the icons of Alexander Schmorell, a saint of the Russian Church, acknowledge his German military background in their depiction of him: 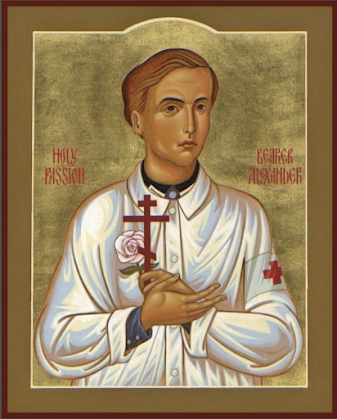 Note the German uniform under the white overshirt.

Now the guys who built the Cathedral of the Russian Armed Forces weren't stupid, they could have chosen to depict the Russians who fought during the Soviet era in a way which emphasised the faith and downplayed the Soviet.

They didn't and that's the problem, they're trying to reconcile the two.

BTW, I have taken most of the images here from the site of a Russian Photographer, Vladimir Pomortzeff,  The Woe of the Vanquished. Great site, have a look.

Posted by The Social Pathologist at 10:39 pm 7 comments: