You can lead a horse to water.* 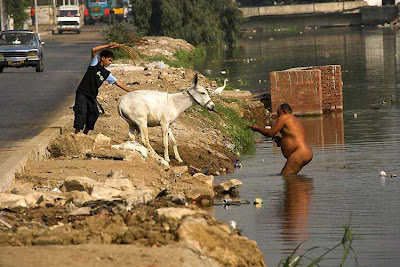 A while ago, Roissy linked to a study which showed that disgust seems to be diminished when people are sexually aroused. The study was part authored by Charmaine Borg, who is a researcher with an interest in sexual dysfunction. Her main area of interest seems to be in trying to elucidate the mechanisms of vaginismus and dyspareunia in the hope of find an effective treatment for the conditions.  Her research findings suggest that these two conditions are strongly linked to the disgust response. Apparently, there has been very little research into the disgust mechanism, so she is really paving some new ground. However if some of her preliminary finds are anything to go by, I feel that her research will have profound implications in our understanding of intersexual dynamics. Particularly the traditionalist understanding of sexual interaction.

The traditonalist "romantic" model of sexual interaction saw sex activity as an endpoint after a period of escalating romantic involvement. Essentially, a man "niced" his way into a woman's pants. Having sex for purely "physical" reasons was seen as a form of debased behaviour and hence aspects the sexual dynamic which emphasised a partners physical characteristics were downplayed or censured amongst polite society. There was a strong anti-carnal nature to our understanding of sexual love. Keep that thought.

Back to Ms Borg's research.

More interesting than her disgust study is this one, which is hot of the presses (Only have the abstract). In this experiment, women were divided into two groups; those who had positive emotional associations with sex and those who didn't. Explicitly erotic images were then shown to both groups of women whilst they underwent functional MRI scanning. The interesting finding in this study was than in both groups of women, brain activation patterns akin to that seen in disgust were activated, with the strongest activation being in those who were sex negative. The authors felt that a woman's sexual memory modulated the disgust response. In other words, women with a good experience of sex were able to modulate their disgust response more effectively than those with negative memory.

This is actually a groundbreaking experiment on two levels. Firstly, it seems to demonstrate a  default disgust-mediated inhibitory mechanism to female sexuality. Unlike men, who are good-to-go,  women it appears are in a "switched-off " mode through a disgust mediated mechanism. It's this default hard-wired bias which probably explains why there is no equivalent to the raw-sex-gay-bar scene amongst women.  All other things being equal, women are wired to find raw-anonymous-sex disgusting.


Now, this research is interesting in how it intersects with traditional conceptions of sexuality and marriage.

Traditional conceptions of love placed a strong emphasis on romantic love and de-emphasised the carnal nature of the sexual dynamic. Christian writers placed particular emphasis on duties towards each other and of the need to render the marital debt owed to each other. Wives were told to submit to their husbands.  Fair enough.

But what happens when a good Christian wife, out of wifely duty, has sex with a husband she finds unarousing? Her "hard wired" neural circuitry is bound to find the experience disgusting. (Aspergoids: she has no choice in the matter).  If she does it enough times, a conditioned response sets in and the wife is involuntarily put off sex. Add a puritanical cultural environment, and you have a great mechanism for killing off sexual intimacy and encouraging extra marital liaisons. Who would have thought?

For those who are interested, an appropriate Victorian cautionary tale.

*I know it's not a horse but I liked the picture.

Posted by The Social Pathologist at 6:21 pm 26 comments: