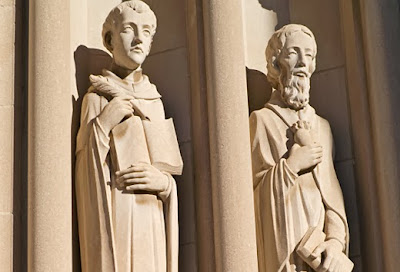 The Church's teaching on the nature of the sexual has been strongly influenced by a natural law interpretation approach to the matter. Some people object to this approach, however, I'm not one of them. I actually think that the approach has much to commend to it but what's become apparent to me is that while this approach is a valid way of looking at morality, it becomes downright toxic when it becomes incorporated into an institution which values and venerates tradition.

Natural law is basically law which can be derived by a fair minded and reasoned look at the facts. For example, people usually get very upset when you take stuff from them. A reasonable man would conclude that taking stuff from people is liable to get a lot of people angry, and running a stable society is very difficult where there are a lot of angry people, therefore taking stuff away from people, when considered rationally, is bad.  It's an approach with a fair amount of intuitive validity. As C.S. Lewis shows in his Abolition of Man, the rules of morality are rather consistent across vastly different societies and cultures. It seems proof that a rational assessment of the facts of life can lead to a common morality.

The quality of natural law formulations, however, is totally contingent on the data from which it is derived and the intellectual apparatus with which to interpret that data. A deficiency in one or the other may lead to false conceptions of what constitutes the natural order of things.  It follows then, that should we get better knowledge of the facts, or a greater understanding of their interrelation through scientific achievement, our conceptions of what constitutes the natural order may change. The state of scientific knowledge and natural law derived morality are intrinsically intertwined. The laws of nature can be only be obeyed to the degree in which they are known.

The real problem arises when an institution starts venerating tradition as a source of infallibility, especially when it comes to natural law matters. For what that institution effectively does is entrench not just prior moral opinions but the contingent scientific understandings upon which they were based.  Effectively, what that institution does is set itself against new truths gained through scientific discovery.

Natural law derived morality has the diabolic effect of conflating facts with morals. Mix in a veneration of tradition and you're setting yourself up for failure, especially when taking on the scientific establishment.  The traditionalist moral zealot--who is intuitively opposed to change--sets out to protect the faith from moral innovations never realising that he is also defending scientific ignorance. The harder he pushes the dumber he looks and hence the faith vs science struggle is born. Playing the "teaching authority" card only makes things worse since authoritatively teaching error only undermines the authority when teaching the truth. It's a lose/lose situation.

It's not that there is anything wrong with the natural law approach its just that the conclusions of natural law change when the facts about the nature of things do. Tradition stymies the perfection of knowledge by preferring the old to the true. When HV affirmed the "constant teaching of the church" it didn't just make a statement of morality but one of outdated reproductive physiology as well.

The advocates of Humanae Vitae like to paint those who criticise it as either stupid, in that they aren't bright enough to understand natural law, or malign, in that their intentions are evil.  But perceptive minds in the 1960's could already see that the the natural law arguments were in a bit of difficulty.

Back in 1964 a certain moral theologian wrote in a letter* to his friend;


First, it is simply a fact that the theologians' teachings on conjugal intimacy during the course of the centuries have undergone very considerable development. So it is legitimate to inquire whether further development is not possible and what direction it might take. Second, in the case of usury we say that changed economic conditions gave interest a new meaning it did not have before, or gave money a new character of fruitfulness. In the case of contraception we must remember that the doctrine of the church was formed and formulated at a time when little was known about the physiology of reproduction. The physiology has not changed but our knowledge of it has. This is one of the reasons why modern theologians have come to permit rhythm, which much of the ancients would undoubtedly have rejected, and which Augustine actually did reject, in strong terms. We now know that many, perhaps most, acts of intercourse are physically incapable of resulting in conception. The difficulties which this fact causes for natural law arguments against contraception have not been satisfactorily solved yet[ED!].-Do not conclude from this that I believe the Church can change her basic teaching on contraception or that she can retreat from the positions established authoritatively by the documents of Pius Xl and Pius XII.

The letter is one of the most extraordinary contributions to the subject of contraception and the nature of coitus. Namely, because the person who wrote it was John C Ford, S.J. was one the most respected moral theologians of the 20th Century and the leader of the anti-contraception faction in Pope Paul VI's commission looking into the matter. Ford, in my opinion, was a skilled logician and intellectually thorough. Ed Feser recommends his books. But though Ford was skilled in logic, he venerated authority and tradition more than he did the truth and, thus, opposed any moral innovation when it came to matters sexual. To his credit, he was intellectually honest enough to see that there were serious difficulties with the natural law argument.

Ford's main concern is that the Church remain consistent in its teachings. As Ford logically rationalised, any contradictory inconsistency would be proof that the Church was in error and hence not guided by the Holy Spirit, therefore, it's traditions must be upheld at all costs. But here again I feel that he made a conflation error. Into the his concept of the Church's "traditions" he bundled together the Church's moral principles and their subsequent practical application; two conceptually different things. To be fair, lots of others think exactly the same way. Conflation errors are very, very dangerous.

The natural law tradition which Humanae Vitae sought to uphold was right in upholding the traditional principle that coitus should not be privated  but wrong in its understanding of what constituted a privation.  In asking men to conform to the laws of nature they were asking men to conform to the understanding of the laws of nature as understood in the medieval period, not the laws of nature as understood by modern science. The document has the remarkable distinction of being right in principle but wrong in application due to an error of fact.

*Fair use quote from the book, John Cuthbert Ford, SJ: Moral Theologian at the End of the Manualist Era. Page 80. Bits of the book can be read on Google Books.

Posted by The Social Pathologist at 10:22 am 69 comments: