Another Nail in the Coffin. 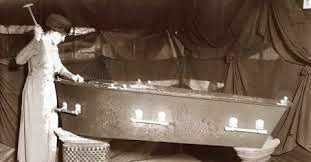 And yet another example which exemplifies the utter failure of the Right to tackle the things that matter in West.

Niall Ferguson explains the success of the West as coming about from the development of six "killer apps" which allowed it to overtake the rest of the World. I'll have more to say about Ferguson's thesis in later posts but one of Ferguson's glaring omissions with his "apps" thesis is in failing to recognise the "software" used to write them.

The Left has for years attacked these principles in many ways. Philosophically, through a rejection of Aristotelian metaphysics; socially, through political correctness; and legally by shutting down speech which subjectively offends instead of objectively injures.

"Hate speech" legislation, which places the locus of injury in the subjective response of the victim instead of the objective evidence of injury is perhaps the most pernicious "viruses" undermining Western Civilisation.  The problem with this type of legislation is that its most enthusiastic hive-mind advocates pursue its intention with a sense of high minded moral zealotry whilst undermining the very foundations of the society they live in.

All of us know people whom you can't tell certain truths to because they will be offended, and that's the problem with hate speech legislation, It elevates subjective offence of being of greater importance than objective truth. In such societies where the principle of "hate speech" is embraced, the amount of discussion permitted is solely determined by the sensitivity of the victims and the recognition by the courts of the injury.

When this retard said that Christian opposition to homosexuality rested on "hate" rather than religious principal, you already know how the courts are going to rule when the heat is put on the Christians. More importantly, you also know that when it comes to a discussion about Gay issues, the limits of conversation are going to be set by the "sensitivity" of the those who are offended. If you want to shut down debate, find offence in everything your opponent says.

That is why the current backflip by the Australian Prime Minister, Tony Abbott is quite simply a disgrace. The Conservatives went to the election with the promise of a repeal of the more idiotic elements of the hate speech legislation. This was a piece of legislation that would have cost next to nothing to repeal and was seen as unpopular by the average Australian but perhaps not in the crowd that the Prime Minister moves in.

Now, with next to minimal pressure, they've decided to support it.  Furthermore, it's a backflip by a man who is both a genuinely committed Catholic and the leader of the Conservative faction in Australian politics. Furthermore, he was educated at Oxford as a Rhodes Scholar.

Some take home messages from this utterly dismal episode.

1) A prestigious university education does not guarantee you a brain.
2) Being pious does not protect you from metaphysical and moral stupidity.
3) Calling yourself a conservative does not make you one.
4) Political Conservatism in Australia is dead.
Posted by The Social Pathologist at 12:41 am 4 comments: