The Revolt of the Masses: I 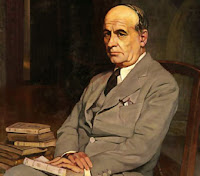 A book I've been meaning to write about for a while now is Ortega y Gasset's*, Revolt of the Masses. It caused quite a stir when it first came out and appeared to be quite influential in intellectual circles for a while, but it's influence seems to have waned, partly, I believe due to the fact that European conservatism is dead and, thus, there is no one there to champion it. Secondly, it's also implicitly quite hostile to American notions of democracy and thus garners little support in the country which hosts last significant bastion of Left wing thought. Amongst learned Americans, the book is given polite acknowledgement and that's about it. The ideas presented are not engaged.

Which is a shame because the book is a powerful diagnostic tool in understanding the social maladies that beset us today. Not the the book is faultless. His writing style sometimes makes the concepts difficult to understand and he does come across as a snob, which means he will reflexively alienate many readers. His solutions to the problems, I think, history will show to be wrong. In many ways the book reminds me of those medical textbooks produced before the age of antibiotics and modern surgery: Highfaluting, great on diagnosis, terrible on therapy.

Gasset can best be described is a lover of classical liberal democracy. Liberal, in this context, is used as in the European sense. An easy way to think of what he means is by thinking of it as the types of governments and civilisation that existed in Europe during the time of the Belle Epoque.  Like myself, he too believes that this was the highpoint of European Civilisation.


Restrictions, standards, courtesy, indirect methods, justice, reason!  Why were all these invented, why all these complications created? They are all summed up in the word civilisation, which, through the underlying notion of civis, the citizen, reveals its real origin. By means of all these there is an attempt to make possible the city, the community, common life. Hence, if we look into all these constituents of civilisation just enumerated, we shall find the same common basis. All, in fact, presuppose the radical progressive desire on the part of each individual to take others into consideration. Civilisation is before all, the will to live in common. A man is uncivilised barbarian in the degree in which he does not take others into account. Barbarism is the tendency to disassociation. Accordingly, all barbarous epochs have been times of human scattering, of the pullulation of tiny groups, separate from and hostile to one another.

The political doctrine which has represented the loftiest endeavour towards common life is liberal democracy. It carries to the extreme the determination to have consideration for one's neighbour and is the prototype of "indirect action." Liberalism is that principle of political rights, according to which the public authority, in spite of being all-powerful limits itself and attempts, even at its own expense, to leave room in the State over which it rules for those to live who neither think nor feel as it does, that is to say as do the stronger, the majority.  Liberalism is well to recall this today-is the supreme form of generosity; it is the right which the majority concedes to minorities and hence it is the noblest cry that has ever resounded in this planet. It announces the determination to share existence with the enemy; more than that, with an enemy which is weak. It was incredible that the human species should have arrived at so noble an attitude, so paradoxical, so refined, so acrobatic, so anti-natural. Hence, it is not to be wondered at that this same humanity should  soon appear anxious to get rid of it. It is a discipline too difficult and complex to take firm root on earth.

Writing from the vantage point of the late 1920's, he is alarmed at the decline that has taken place in European Society, a decline he places squarely on the emergence of a new type of man onto the cultural stage. He calls this man, mass-man.

But before we get to mass-man we've got to understand Gasset's concept of civilisation. Civilisation for Gasset was the end product of the thinking of the finest minds over the past three millenia of European history.  The rules, regulations, customs, habits, inter-relationships and social structures that had been thought out were passed on from one generation to another. The more advanced the civilisation the greater the intellectual capital invested it. Furthermore, Gasset recognised that the parts of the system were interrelated and the system could only function effectively if minds equal to the task at hand were given custody of it.


For many reasons, but for the moment 1 am only going to stress one. Civilisation becomes more complex and difficult in proportion as it advances. The problems which it sets before us to-day are of the most intricate. The number of people whose minds are equal to these problems becomes increasingly smaller. The post-war period offers us a striking example of this. The reconstruction of Europe-as we are seeing-is an affair altogether too algebraical, and the ordinary European is showing himself below this high enterprise. It is not that means are lacking for the solution. What are lacking are heads. Or, rather, there are some heads, very few, but the average mass of Central Europe is unwilling to place them on its shoulders. [ED]

What concerned him particularly, was the cultural preconditions which gave birth to science:


But I repeat that I am astonished at the ease with which when speaking of technicisism it is forgotten that its vital centre is pure science, and that the conditions for its continuance involve the same conditions that render possible pure scientific activity. Has any thought been given to the number of things that must remain active in men's souls in order that there may still continue to be "men of science" in real truth? Is it seriously thought that as long as there are dollars there will be science? This notion in which so many find rest is only a further proof of primitivism. As if there were not numberless ingredients, of most disparate nature, to be brought together and shaken up in order to obtain the cocktail of physico-chemical science! Under even the most perfunctory examination of this subject, the evident fact bursts into view that over the whole extent of space and time physico-chemistry has succeeded in establishing itself completely only in the small quadrilateral enclosed by London, Berlin, Vienna, and Paris, and that only in the XIXth Century. This proves that experimental science is one of the most unlikely products of history. Seers, priests, warriors and shepherds have abounded in all times and places. But this fauna of experimental man apparently requires for its production a combination of circumstances more exceptional than those that engender the unicorn.

And he has a point. Inventions have come and gone throughout history, but its only Europe that gets the whole business of science going. But we need to remember that culture which keeps it going is not a given. Hitler got rid of his finest Jewish minds because the conflicted with the political necessities of Nazism. Stalin decreed Lysenkoism the official party line and our own Gaystapo have declared Global Warming an article of infallible dogma. The cultural climate which allows pure research is progressively limited by the politicisation of everyday life.

For Gasset, civilisation is a bit like the computer in front of you.  It in itself is the end  product of countless discoveries in physics, chemistry, metallurgy, mathematics, philosophy, electronics and so on. The fact that it is simple to operate belies the tremendous complexity in its generation. Gasset argues that, given its complexity, its upkeep and maintenance must be given to men who are trained and who understand thoroughly its operation. Note, that this is not an issue about power as much as it is about competence. Morever, Gasset recognises that a civilisation needs to be maintained by men committed to its ideals. Failing that, the jungle begins to gain ground.


Civilisation is not "just there," it is not self-supporting. It is artificial and requires the artist or the artisan. If you want to make use of the advantages of civilisation, but are not prepared to concern yourself with the upholding of civilisation-you are done. In a trice you find yourself left without civilisation. just a slip, and when you look around everything has vanished into air. The primitive forest appears in its native state, just as if curtains covering pure Nature had been drawn back. The jungle is always primitive and, vice versa, everything primitive is mere jungle.

When civilisation crumbles natural savagery reasserts itself. Gasset's thesis is thus: European civilisation is a product of over three millenia of thinking by the best minds. Each generation is handed this inheritance and builds upon it. Finally, in the late XIXth Century, this cultural heritage is passed onto the taxonomic equivalent of Rachael Jeantel: Mass-man. It is from here that the problems stem.

* Proper form would dictate that I use his surname in entirety but I felt the abbreviation necessary for stylistic concerns.
Posted by The Social Pathologist at 2:54 pm 6 comments: