Send in the clowns: Or I hate Illinois Nazis. 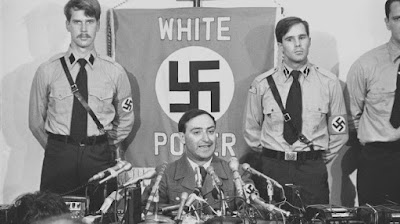 One of the unfortunate patterns one observes when looking at the Right in the 20thC is that whenever it is about to snatch victory it self destructs. I think we're seeing this now with the success of the Cuckservative meme, a shiv which is gaining popularity because it encapsulates a contemptible truth which so well describes the modern day Republican leadership. However the meme is at risk of corruption because White Nationalists are trying to frame it along their own lines, and in doing so are subverting its effect.

In my mind, the two groups most responsible for the failure of the Right in the 20thC have been the traditionalists, who have failed to recognise new truths and continued to act as if they did not matter and the Nazi's. The Nazi's particularly deserve a special mention because no other group has so tarnished and impeded the right's ability to discus subjects such as race and nationality without it degenerating into a sordid squabble between vile entryists and others who suicidally bravely want to reasonably discuss the subject.  Normal people just want to stay away.

Whenever these clowns force their way into a discussion it invariably degenerates into a discussion about Jewish Mind Control™, Holocaust denial, Anti-Christianity, Nordic Runes, Whiteness distinctions, Racial purity, Genetic Calvinism, Social Darwinism and extreme forms of ridding ourselves of "Social Problems". Sympathetic treatments of Hitler abound.

Furthermore, as I've argued in the the past, Nazism was a form of Alpha Socialism. In other words, it was Leftism dressed in Right Wing symbols: Stalin in drag. It drives my lefty friends nuts when I tell them that the Eastern Europe theater in the Second World War was a battle between National Socialists and International Socialists and yet it is the truth. It was sectarian. They guys who embrace this creed are in no way friends of the right.

There are serious problems in the West which are invariably linked with race and religion and which need to be discussed in an intelligent and dispassionate manner with a duty to the truth. Yet as soon as these entryists force their way in the discussion it degenerates into a brawl. Furthermore, any serious Righties who want to discuss the matter reasonably get painted with the same brush. The Left wins again. Any discussion in the future with regard to race and nationality has to come from a vantage point where these clowns are excluded.

Any change in system is not going to come from the top, rather it's going to come from large numbers of the shrinking middle class coming on board. Because they're the ones that make stuff happen. They set the school curricula, populate the universities, administer the media, and run the senior officer corps. The leaders set directions but nothing happens without the middle class. The odium these entryists generate in the middle class has to a significant degree alienated it from the Right and resulted in a leftward drift of society.

I'm not arguing that the subjects of race and nationality are off limits, rather they need to be discussed sensitively given the political and human realities involved. The clowns act as if this stuff doesn't matter.

Which brings up back to the term "cuckservative". As long as cuckservative means someone who, to quote  Roissy,


....... is a cowardly pussy who sucks up to leftoid equalists for mercy and pisses himself when he gets accused of racism, sexism, or anti-semitism.

All will be fine. But as soon as "cuckservative" begins to be defined as someone who doesn't have enough race consciousness or gives up "White Interests" the game will be lost. The Roissy version frames the concept along masculine lines, an area where the Left is weak. Reframing it along racial lines plays onto the Left's electoral strength. Already the the Left response to cuckservative is that it is a code word for racist.  Are White Nationalists on the Left's payroll?

Smarter people, years ago, recongised the poisonous effect of the Nazi right with regard to legitimate Conservatives.  Falling Down is such an underrated movie.( NSFW)