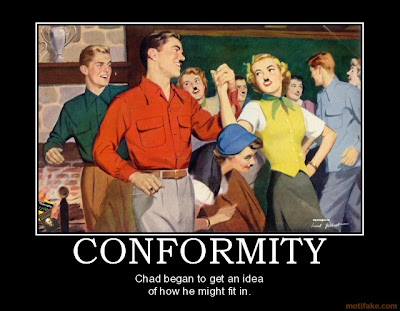 As I mentioned in My previous post, part of the approach in dealing with women with post natal depression is to provide them with "counseling",which in reality it should be called deprogramming.

Many of the women who suffer with PND are perplexed as to why they have the feelings that they are experiencing. Women, of course, have been taught that the maternal instinct is just that, a naturally occurring instinct which is meant to be present in all women, a natural bond that arises without effort in the presence of their own child. So when women find that they are having difficulty bonding with the child, or enjoying the experience, they become convinced that something is wrong with them.

It is hard to emphasise just how divorced from reality societal conceptions of motherhood are.
With the social atomisation of society, its quite surprising to note, just how many women do not have any experience with children until they have their own. Their conception of what childhood and motherhood are meant to be like is totally driven by perceived cultural norms. And the biggest cultural influence in our society is the media. Our media constantly bombard women and with images of smiling mothers with their smiling children: Love, cuddles, giggles and fun. The immediate post partum stage of childhood is never presented as a hard grind (which in reality it is) rather it is portrayed as a period of bliss and deep maternal love. So when a woman is not having a good time with her baby, she becomes convinced that there is something wrong, usually with herself. She thinks herself a bad mother.

This conclusion would not in itself be so damaging were it not combined with another factor; the concern with peer perception that is part and parcel of female nature: No woman wants to be thought a bad mother by other women. One of the critical factors that stops women from seeking help is their fear of what other people will think of them. It's only when the situation becomes critical or in some cases too late, is this struggle to preserve reputation overcome.

As I see it, a large component of PND is due to intellectual and cultural pathology. The process is as follows.

1) Women today have little direct experience of motherhood prior to having children. Women's expectations of motherhood are therefore derived from third party sources.
2) Women been taught that motherhood is natural to her.
3) Woman been taught that a baby brings happiness.
4) The woman does not experience happiness.
5) Since she has been told that she is meant to be happy and isn't, she concludes that there is something wrong with her.
6) However she refuses to seek help, since other people would think that she is a bad mother, because good mothers are able to engineer happy relationships with their children.
7) Therefore she suffers until the situation gets beyond her control.

Therefore one of my first tasks with these women is laying out the truth, so to speak, about motherhood. Namely, that especially in the early stages, motherhood is a slog. No; it's quite normal to feel hostile to your child, when sleep deprived, stressed out, alone and not sure about what you are doing. Most of the mainstream advice about motherhood is bullshit, especially when it concerns issues of how you should feel with regard to your baby and so on. As I explain to these mothers, loving feelings may be fleeting or totally absent but you still have a duty of care. But perhaps most importantly of all, is that millions of other women feel exactly the same way about their babies. YOU ARE NOT A BAD MOTHER because you feel like you are doing it hard.

(Many new mums, who have raised the issue with other women privately in the same situations as themselves have been suprised to find that the other woman feels exactly the same way that she does.)

Frequently, when I give this talk, it is followed by a effusive display of sobbing, emotion and relief. It's as if a pressure relief valve has been opened. After first assessing the safety of the mother I spend several session with her to "deprogram" the mother with regard to the misconceptions of motherhood that have been planted in her head from whatever source. ( The Nursing Mothers Association deserve a special mention for their malignity in this situation--so many mothers have felt as failures because of their inability to breast feed.)

Now PND may first appear as a subject worthy medical interest only but reflection on the phenomena does yield insights into the operation of the female mind.

Firstly, most women strive to conform to ideals of the group, most women want to be good mothers. "Good" being defined by what other people or the culture thinks. Indeed public opinion seems to be given a greater weighting in the mind of woman than it does in a man; as a result, a woman is more of "public" person than a private individual. Secondly, her desires are frequently in conflict to public opinion but she is more likely to yield to opinion lest she earn opprobrium from the group. Game hints at this insight with its understanding of the importance of a man displaying high social worth. High social worth in this instance being high social worth as perceived by other women.

He wanted her, she'd never tell
secretly she wanted him as well.

But all of her friends stuck up there nose
they had a problem with his baggy clothes.

Women's choices are in part driven by other people's opinions, a phenomena that appears far less singnificant in men. Now, I'm not saying this is a bad thing, rather it needs to be recognised as a phenomena that is strongly expressed in female nature and it explains a whole lot of female behaviour. The pre-occupation with fashion, gossip, relationships and social events are all directed towards ascertaining what the social state of play is, what are the current group norms and which behaviours conform to them and which do not. Women are not only far more social than men, but far more likely to insist on conformity to group norms and to censure those who step outside the boundaries: They ensure sociability. Women's nature seems to be acutely sensitive in her relation to the contextual "in group", anxiety arising if she appears to be on the outer.

The other implication of this cognitive phenomena is that "fashion" is a powerful influence on behaviour; frequently in conflict with both intellect and primal desire. This is all fine if the "fashionable" group is healthy. But if the group is toxic, misery ensures. Several years ago, the sensitive new age man was all the rage, only to be dumped after he was found to be profoundly unsatisfying. He appealed to the intellect and fashion, but not to primal desire, hence the "conflict" of emotions. The currently bad boy fad, appeals to primal desire and fashion but not the intellect and it too will lead to frustration.

It also need to be recognised that this phenomena in women, is both a weakness and strength. A weakness in the sense that woman's own nature compromises her independence: she may want to act independently, but suffers because of it, which in turn makes independent action less likely. However her weakness is a strength in the sense that the weakness promotes social cohesion by setting the norms of the behaviour of women primarily and men secondarily. Fashion is a far greater influence on behaviour than argument.
Posted by The Social Pathologist at 5:55 pm 7 comments: