Whittaker Chambers: The failure of Conservatism. 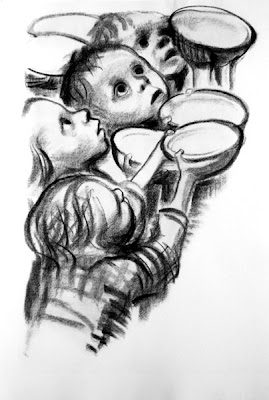 In the years when Communism was advancing successfully against the West there were those who believed that its disruptive power was its power to manipulate a Fifth Column composed of non-Soviet Communists, sympathizers, fellow travellers, dupes, opportunist politicians, hitchhiking with Communism as they would in any other vehicle that seemed to be going part of their way-in short, the kind of debris and dust that almost anything with sufficient gravitational pull attracts and keeps whirling around it. I held that such elements, while dangerous, were not Communism's chief power in the West. I held that power to be something else-the power of   Communism to manipulate responsive sections of the West to check counteract, paralyze, or confuse the rest. 'nose responsive sections of the West were not Communist, and never had been. Most of the minds that composed them thought of themselves as sincerely anti-Communist. Communism manipulated them, not in terms of Communism, but in terms of the shared historical crisis-peace and social justice being two of the most workable terms. They were free to denounce Communism and Communists (and also anti-Communists) after whatever  flourishes their intellectual innocence or arrogance might choose. Communism asked no more. It cared nothing, at this point, about motives. It cared about results.

Unlike Communism, the West held no unified solution for the crisis. In face of the crisis, part of the West reacted with inertia- inertia, in the simple terms of the physics primer, that is, the tendency of a body to remain at rest or in a straight line of motion. But the responsive section offered a solution for the crisis. This solution, whatever differences it assumed from place to place and time to time, whatever disguises Political expediency or preference draped or phrased it in, was always the same solution. It was the socialist solution.[Ed] Derived, as doctrine, from the same source-the historical insights of Karl Marx-the socialist solution differed from the Communist solution chiefly in political methods. One difference consisted in the slower rate of speed at which socialism proposed to apply its solution. Another difference concerned the kind and degree of coercion that socialism would apply to impose its solution. In practice, no socialist government had yet pushed its solution to the point where full coercion must come into play. Therefore, this difference bad not yet stood the test of reality. Otherwise, between the end solution that socialism and Communism both hold in view for mankind-the matured planned economy of the future-the difference was so slight that it would be difficult to slip a razor blade between them.

Conservative thinkers do not spend much time dwelling on why leftism has made such inroads into society which I think has been a fundamental error in conservative thought. Instead they spend their time try to combat the spread head on, instead of trying to tackle the pathology at its source.

As mentioned previously by Chambers, Socialism (and its bastard brother Fascism) did not arise in a vacuum, rather they were a  cognitive response to the social crises of the times. They were an attempt to solve the problem and hence were proactive remedial proscriptions and offered hope. The fact that they were eventual quack remedies is irrelevant in terms of their effect to elicit societal transformation, since what they offered was hope to multitudes in a promise for a better world.

People just fail to understand how bad life was for the bottom rungs of society in the late 19th Century. The massive migrations to the New World by Europe's poor, hungry and homeless masses, in age where ship travel was risky business, and return was very difficult, illustrates just how much people wanted to escape the social situation of the times and just how intense the pressures were. The great migrations of the English to the New World was testament to just how crap life was like in ye Old England. The same could be said for all of Europe.

Chamber's astute observation was in recognising that traditional Europe's response to this problem was nothing: inertia. It resisted any form of change.

Socialism offered a quack solution for the problem, but it did offer a solution. Most men are not profound or elaborate thinkers, judging things by their appearance instead of their true nature's, and faced by a choice of a traditional miserable life or promise for a bright future, it was a no-brainer for most men. To passionate believers in Socialism, Conservatism became the enemy whilst to the less passionate, Conservatism became irrelevant.

Now Chambers appears to have had a different view of conservatism than many conservatives have of it;


I think I have gone beyond the conservative position. I have found that behind it lies something much more steadfast-the  conservative spirit, or, if you will, the conservative principle. Ages change, politics shift and slither-the conservative spirit does not change. It adjusts because it is a summation of human wisdom, and in a  sense organic, it looks from the fastness of life, and bends or yields to what is passing, but maintains, as the light shines in darkness, what is everlasting because it partakes of it itself.

Note that Chambers felt that conservatism was adaptable whilst keeping a core essence, he was no traditionalist. For Chambers, the traditional conservative position, which was both unyielding and inflexible, was part of the root cause of the crises, the festering sore which seeked a remedy, even a quack one.

Chambers' position however raises an interesting theoretical question. How much can conservatism change before it ceases being conservative?  Chambers seems to allude to some underlying "core principle"  which underpinned a degree of flexibility. I think Chambers is partially right here in identifying that conservatism is flexible to a degree as opposed to traditionalism which isn't. The mistake I think that traditionalists make is taking the form of conservatism at a particular point of time
and mistaking it as its substance, conservatism is far deeper.

Where I disagree with Chambers is where he places the locus of this Conservatism, seeing it a summantion of human wisdom. This may of been the case in Ancient Rome or Greece, but it is not the Conservatism of the West. The Conservatism of the West is a Christian Conservatism and hence its underlying principle is Christian. If I had to identify this inflexible core in Christian Conservatism it would be rooted in Caritas, the stuff of God operating in Man. Christian conservatism as such is an expression of Caritas. The word is frequently translated into English as Charity or Love, but I feel that it something more ecompassing than the limits that these words place it on it. At its essence, it is not only goodness itself, but in act which flows from it. Caritas is the inflexible principle of conservatism.  Local and temporal contingencies will affect the expression of Caritas but its underlying nature will remain the same.

The Christian religions teach that Caritas is a grace given to man by God and its also why there will be no Western revival without a bended knee. No Caritas, no West. It's as simple as that.