The Strange Case of Reginald Garrigou-Lagrange 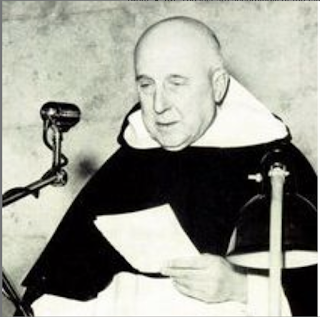 One of the things that struck me in reading about de Gaulle's life is how Catholic support for the Free French could be predicted by theological position, with "traditionalists" supporting the Vichy regime.

The common perception people have of the Vichy regime is that it was a puppet regime imposed by the Nazis. The thing is that this is not exactly true. It would be more correct to say that it was regime enabled by the French defeat and though it shared a disadvantageous position with respect to Germany, there was much synchronicity between the ideals of it and Nazi Germany. People forget just how respectable Fascism was prior to the Second World. Contemporary history tends to paint the French as "victims" of Nazi conquest yet the reality was that there were many Frenchmen who were supportive of the German conquest of Europe.

People forget that prior to the Second World War, France was deeply divided society, much like the modern U.S., with both Left and Right factions who saw no agreement virtually on anything.  The biggest movement on the Right  was the Action Francaise movement, which advocated a return to French Monarchy, a repudiation of the French revolution, a restoration of the preeminent position of the Catholic Church in French society and a return to "traditional values".  It was anti-Semitic, anti-Protestant, Xenophobic  and collaborated, in some instances, quite enthusiastically with some of the more odious Nazi policies.

What was strange about the movement is that it was led by an avowed atheist who was contemptuous of religion, Charles Maurras. He supported the Catholic Faith because it formed part of the "identity" of France but as said before, he thought the faith a bunch of tosh. He did, however, like Vichy.

Now men of quite of quite rudimentary and simple faith would probably feel that there is something intuitively wrong with a position which supports a religion while at the same time regarding it with contempt.  But I suppose this incompatibility can be overcome with a rigorous philosophical training and deep spirituality. Enter  Reginald Garrigou-Lagrange. (RGL)

RGL, who is currently being rehabilitated by certain trad sections in the U.S., was not your ordinary member of clergy.  A brilliant Dominican theologian, author of many theological books, who held high ecclesiastical office, ghost writer--and "influencer"-- of several papal documents, he was doctrinal supervisor to John Paul II. As said, he was an exceptional guy, but in many ways he encapsulates the problem of Right Catholicism in the 20th Century. As Etienne Gilson explains:

Posterity will have more leisure than we have, and the future will see things from a distance that is lacking to us. Those who are curious about doctrinal teratology will enjoy unraveling the intricacies of such an alliance. On the political level no explanation is needed. The French people are born fanatics; rightists or leftists, they are always willing to persecute one another in the name of some sacred principle. ....The really interesting question was to know why a Master in Theology belonging to the Order of Saint Dominic, as well as a highly qualified interpreter of Thomism who enjoyed in the Church an unchallenged doctrinal authority, should then have felt duty bound to teach that Charles Maurras and Saint Thomas Aquinas agreed on the notion of "the best political regime."

It is enough to open the Summa Theologiae at the right place to know that this is not true. Yet this theologian was very far from being alone in his error. Laymen of great intelligence and talent did not hesitate to side quite openly with the "party of order". The heart of the problem would be to know how, by what secret channels, Thomism could seem to them to offer a theological justification of the political theory of Charles Maurras. What the royalists hoped to gain from such an alliance is obvious. Saint Thomas is the Common Doctor of the Church. To establish that his political doctrine was the same as that of Charles Maurras amounted to proving that the Political doctrine of Charles Maurras was that of the Church. With this proved, all French Catholics without exception would have been held in conscience to accept the monarchist politics of the Action Francaise. What a haul! Let us resist the temptation to as what peculiar brand of "Thomism" this must have been to feel akin to the positivism of Maurras which, like that of Comte, was deeply interested in Rome but not in Jerusalem.

The Philosopher and Theology

Now RGL wasn't just a supporter of Vichy, he was an enthusiastic one. He was so enthusiastic that he used his doctrinal authority to assert that anyone who supported the Free French was committing a mortal sin. And there is credible evidence that he saw no problem with Vichy's anti-Semitic policies. Now it's one thing when the local village priest comes to a conclusion which is stupid, but when your "best and brightest" is out cheer-leading for an evil government you've got a serious problem.  What's even worse is that RGL enjoyed considerable support and esteem in the Vatican well after the evils of the Nazis' and their collaborators were born to light. Remember this is all before Vatican II and its "corruption" by "liberalism".

Apologists for RGL have stated that his religion clouded his theology.

RGL primarily saw himself as a religious man and his "faith" was sincere. There is no chance in hell that he didn't measure his political actions by the yardstick of his faith. And this is where the problem really lays: How is it that a man, who is gifted in intelligence, a profound ascetic, devoted to religion and who's had the best education that  Western Civilisation could have thrown at him come to the conclusion that there was no moral problem with his faith and the persecution of an innocent people and the support of a morally vile regime.

After the war, de Gaulle "leaned on" the Vatican and a quarter of the French clerical hierarchy were forced to retire. RGL kept his position.

There is something profoundly wrong here, and I think it is here where we must look to understand one of the reasons why religion collapsed in the 20th C.

Posted by The Social Pathologist at 11:41 pm 22 comments: