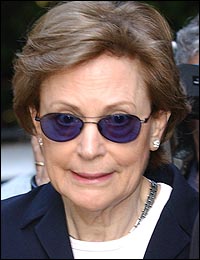 Alford tried to be a good wife to Fahnestock after the marriage, but even she recognised that "tone" of their relationship had changed after her revelation. Although she pretty much obeyed Fahnestock's demand that she never mention JFK, she still managed to keep some "mementos'  from the relationship which she hid through the apartment. (This little fact says a lot about her commitment to Fahnestock at the time of marriage.).Still, her conscience or self-interest at fear of discovery must of bothered her, and so, unhappily, she got rid of the evidence of her previous life.

She describes the first thirteen years of their marriage as happy, but a prevailing pattern had developed; whenever some emotionally charged issue came up, it was swept under the carpet.  Even when their prematurely born son died, the issue was not talked about between themselves.

I'm not one for psychobabble, but a marriage is meant to be  both physically and emotionally intimate, and I agree with Alford here, in that this state of affairs was a precondition to their eventual marital disharmony. A woman without an emotional bond is a woman with a void, and it's a void that will get filled with something else.

I would be a mistake to think that Alford was completely duplicitous towards her new husband. Through a combination of will power and events she was able to suppress memories of Kennedy and was able not to think about him for long periods of time. Yet, quite unexpectedly, the memories would return:


And yet on crisp spring day in 1969 when I took the afternoon walk with the baby in the carriage, I passed a hair salon on Massachusetts Avenue advertising Frances Fox hair products in the window. It had been six years since I'd given the President his regular hair treatments, but suddenly I was overcome with emotion. I looked both ways down the street to make sure no one was watching me (ridiculous, I know) and, carrying Lisa in my arms, walked into the store to see which products they sold. I wasn't planning to buy anything. I just wanted to luxuriate in the warm memory of President Kennedy, if only for a few minutes. I picked up the bottles and turned them over in my hands. I carefully set them back on the counter and walked out. I felt so guilty about what I'd done, I tucked the incident away, deep in my mind.

Six years later, five minutes of alpha.  The emotional infidelity lingers long after the physical has stopped. Perhaps this is part of the reason that those who have been promiscuous have a greater propensity to infidelity.  Memories of intensely happy, sexually charged episodes serve as a serve as an escape from drudgery or a reassertion of happier times. Times we may wish to recreate.

Fahnestock, at this stage, was working for the pigmen at Goldman Sachs, and was by her account, a "wonderful provider husband". They were materially and socially successful and and yet they were slowly drifting apart. When conflict or confrontation came up, Fahnestock's response was to shut down and withdraw to his summer holiday house. This meant that Alford started making more and more of the decisions, especially after they bought a new house and started renovating it. Fahnestock was becoming beta. ( Why he chose this course of action is open to speculation, as he was a very successful man of finance. I suspect it was his chivalrous upbringing which pedastalised females and emphasised the lack of conflict with them. But this, of course, is a speculation.)

Their marriage was becoming progressively more stale. Though she does not explicitly mention it, it does appear that she had gotten out of shape during marriage and made demands which Fahnestock tried to satisfy but did not make her happy. The lack of emotional and physical intimacy led her to a fling with another man, something she instituted.


Alone in the hotel room that night, I realized how much I yearned for physical affection and connection. So I made a bold, spontaneous gesture that surprised both of us. I climbed into Bill's bed instead of mine. It seemed like such a natural culmination of all the encouragement we'd shared during our months of training. I had turned thirty-nine two days before, and Bill was my third lover.


I had no regrets the next morning as we rode the train.........The guilt wouln't fully take hold until I was on the plane back to New York, and facing the prospect of seeing Tony again. As the reality of my infidelity sank in, I couldn't avoid one obvious fact: After years of accumulated silence with Tony, my marriage was crumbling.

It was interesting that when she confessed her infidelity to her sister, they were surprised that she had been as faithful to Tony for so long. (People on the "Social Reigister" obviously have different morals to myself).  Still, her infidelity with Bill provided her with psychological comfort:


Sometimes I would daydream about a life with Bill, though he never even held out that as a possibility. [Ed: Bill sounds alpha] Whatever fantasies I had harbored about us ended when I accepted a full-time job as a manager of a local tennis and squash club and ever so slowly, drifted away from the world of runners and back into my unhappy marriage.

Eventually though, the she found the lack of intimacy in the marriage unbearable. The man whom she was so desperate to marry in 1963  was the man she no longer wanted to be with.


"I want a divorce" I said
"What?" he asked.
"I think you heard me." I wasn't saying anything more. I waited for him to respond.
"Are you sure?" he said, "You've never known what you wanted, but if that's it, then that's what you'll get", I think you're going to regret it."

His words hung in the air, more a threat than an attempt to change my mind. He was right, in a way. I didn't know exactly what I wanted, but I knew I had to take a step toward change. I knew that Tony wasn't solely to blame for my unhappiness or the ruin of our marriage. It was my fault as much as his. I had not made his life happy. But I also knew that I had reached an endpoint to the misery we created for each other.

Twelve months later they were divorced. This is an important passage from the book, especially for students of Game.  If you look at Alford's life, the times when she appears most happy is when a man "directs her life". Not in the sense of "bossing" her around, but rather in giving her life direction.  She was happy serving the president, she was happy in the initial stages of their marriage when her and Tony were setting up their life according to Fahnestock's  direction. She becomes unhappy only after that leadership vanishes.


(to be continued)
Posted by The Social Pathologist at 11:07 am 3 comments: