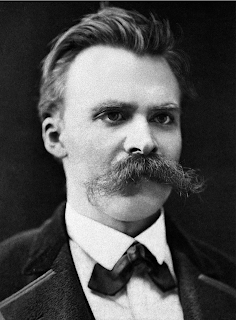 “I could be the Buddha of Europe: though admittedly an antipode to the Indian Buddha”

I've got to admit that I've never read much of Nietzsche simply because he hasn't really interested me that much.  But perhaps I've been wrong. While rummaging through some journal articles I became aware of the fact that he had a reasonably solid understanding of Buddhism and apparently even spent two years learning Sanskrit. Interestingly, a lot of the "Will to power" and "Ubermesch" stuff was a consequence of his understanding of Buddhism and its application to European culture.

What I also found astounding is that there is a fair amount of literature out there looking at the relationship between Nietzsche's thought and Buddhism, the executive summary being that they are more alike than different. What I find interesting is how he also recognised that the decline of European culture will come with it becoming more Buddhist, particularly Christianity, something this blog has mentioned before.

This is form an excellent journal article which summaries his thoughts on the subject which I would highly recommend:

Nietzsche opened his Genealogy of Morals with a revaluation of Schopenhauer, considered as a cultural event in the history of Europe. Thus, at the moment when Schopenhauer's philosophy was a cause celebre, creating spectacular enthusiasm among intellectual and artistic circles, Nietzsche felt compelled to abandon his most influential mentor in order to dramatize the danger that he believed Schopenhauer's Weltanschauung represented when conceived as a European destiny.

It was precisely here that I saw the great danger to mankind, its sublimest enticement and seduction—but to what? to nothingness?—it was precisely here that I saw the beginning of the end ... the will turning against life . . . I understood the ever spreading morality of pity . . . as the most sinister symptom of a European culture that had become sinister, perhaps as its by-pass to a new Buddhism? to a Buddhism for Europeans? to Nihilism?

In this manner, Nietzsche raised the specter of European culture passing into a nihilistic phase, one characterized by a will to nothingness—a will to the absolute relativity of all values and, hence, to the frank realization that life was without any given meaning or goal. Such a cultural destiny, Nietzsche called a new or "European" Buddhism. We should note immediately that Nietzsche took special care to emphasize that a Buddhistic phase in the cultural life of Europe would constitute a new form of Buddhism and, thus, would exhibit qualities both consistent with and profoundly different from classical Buddhism. Some of those differences we have already encountered in Nietzsche's judgment that classical Buddhism arose out of the death throes of an exhausted civilization and marked, therefore, a final cultural form of excessively spiritual men[ED].

Nietzsche saw that the loss of the transcendental values which came about with encroaching atheism would  produce a state of affairs which was similar to what went on in Asia before. Neitzsche's critique of Schopenhauer was about how he approached the "death of God". Nietzsche may have ranted about his pity but what really irked him was his passive acceptance of the fact which he saw as a type of Nihlism.   But its also important to note that excessive spirituality paved the way for the transformation of Christianity.

The Christian era is succeeded by its opposite, a new Buddhism. Such a movement occurs within Christianity as a result of its revaluation of itself. Nietzsche postulated that the "will to truth" was the agency by which Christianity overcomes itself and necessarily eventuates in an honest atheism and a radical cultural nihilism. After almost two thousand years of training in the "will to truth," which eventually got sublimated into cleanliness of intellectual conscience (science), European man is finally ripe for the truth of a new Buddhism and the total revaluation of his most precious venerations. The new Buddhism, therefore, will be the terminal phase of the Christian era.

But how could Christianity give birth to a European form of Buddhism? In Nietzsche's judgment, European Christianity's moral world-view and its in-junctions produced a man already trained in the ways of practical nihilism. In fact, Christians have always been practicing nihilists, and it was this hidden scandal that Nietzsche believed he had uncovered about Christianity. Such a practical nihilism was rooted in the Christian's disposition to invest all of the significance of life in a kingdom beyond this world—indeed, to devalue the earth—including human reason, instincts, and passions. Such a tendency brought about a radical depreciation of the richness of earthly life and the concomitant investment of nothing, and the beyond, with ultimate meaning. By these means, Christianity educated European man toward a yearning for nothingness and created a Buddhistic tendency in man. Viewed in this manner, European Buddhism, whatever specific form it might finally take, would have to be seen as the culmination of a moralistic development within Christian culture itself. Its appearance would symbolize the final collapse of the Christian movement and the onset of a post-Christian era.

There are several really important points here. That excessive spirituality conditions men to a Buddhist worldview. Secondly a detachment from "the world" negates the importance of worldly affairs. Thirdly, an excessively keanotic interpretation of Christianity produces an atmosphere akin to nihlism. What Nietzsche is saying is that traditional asceticism and modern theological developments i.e. Kumbayah Kenotic Christianity will transform Christianity into a Buddhist version of itself.

Strangely, Nietzsche greeted the prospect of a Western form of Buddhism with considerable ambivalence. In Beyond Good and Evil, he spoke of Europe being threatened by a new Buddhism, while in an unpublished note, he characterized the possibility as a "nihilistic catastrophe." Yet in another unpublished note, Nietzsche welcomed a European form of Buddhism as both "the most extreme form of nihilism" and "the most scientific of all possible hypotheses." Such an ambivalence on Nietzsche's part reflected his genuine uncertainty regarding what kind of pessimism (or nihilism) would eventually come to dominate European culture. Nietzsche never doubted that Europe had already entered a nihilistic phase of cultural existence. What he did have serious misgivings about was the specific interpretation that Western man would give to his emerging awareness of a culture-wide crisis of meaning—that the old values which had supported and shaped his life had collapsed and, therefore, could no longer insure a future for him. In other words, how European man would appropriate the new conditions of his life mattered greatly! The issue turned, for Nietzsche, on whether Europe would succumb to a pessimism of weakness, symbolized by Schopenhauer's metaphysics and an opiate Christianity, or whether it would will the courage of a "pessimism of strength" symbolized by Nietzsche's Zarathustra, the Dionysian man. Only under the latter banner would it be possible to create a future beyond the desert of nihilism. Moreover, it was in the latter sense alone that Christianity could become the proper basis for a new European civilization. Should this occur, then the emergence of a European Buddhism could be viewed as the signal for the beginning of a more spiritual age.

If found this last bit quite interesting as Nietszche still saw some possible hope for Christianity, but it had to reverse some of its tendencies. You've got to take Nietzsche with a grain of salt but what I find interesting is his notion that Christianity could successfully tackle society if it could "deascetisise" to a degree and recognise the legitimacy of the the created world, not just in theory but in practice.

Posted by The Social Pathologist at 10:29 pm 11 comments: