In the movie, Terminator II,  the opening scene shows the naked terminator walking into a bar looking for clothes. The majority of the scene is filmed as "through the eyes" of the terminator, and as the terminator strolls the room, data from numerous automatic subroutines is shown presenting itself onto its awareness . 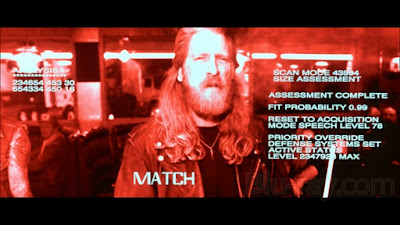 Years ago, I was walking down a street with my family, in the Brooklyn district of New York, on my way to the subway museum. My wife and I were talking to each other trying to follow the directions on a map when suddenly an uneasy feeling came upon me. It slowly dawned upon me that lots of eyes were staring at us, and soon the realisation occurred that we were the only White people in a neighborhood where everyone else seemed Black.  While most people were on their way doing their usual things, there were definitely eyes of contempt directed at us.  Almost as soon as I became aware of our situation, my wife seemed to have become aware of it as well. An uneasy came upon us. Given that we had the children in tow, and the Subway was only about 300 meters away, we agreed that it would be better to nonchalantly cross the street and get back to the subway. We got there without incident. I imagine everyone has a similar story.

What was interesting about this situation, is that that the sense of threat posed to my family--assessed either rightly or wrongly--was first appreciated by an unconscious processing of the environmental situation and which eventually asserted itself onto my consciousness.  Clearly, what had happened whilst my wife and I were walking down the street, talking about our day's plan, was that visual information from my immediate environment was being assessed by subconscious subroutines and a a threat analysis was being made, all without any deliberate awareness by myself. Eventually, the subroutine felt that action was required and impressed itself on my consciousness by eliciting a sense of unease.

Now the traditional approach to western anthropology divided man into rational and irrational, or more specifically, biological and cognitive but what's become increasingly apparent is that this anthropology is wrong, and division should be made along the lines of biological, biocomputive and cognitive elements. With the biocomputive layer being able to process information for the majority of time without our conscious awareness of it, only making itself noticed through the sensations of intuition, attention, attraction and repulsion.

If you think about a simple task such as walking, you'll realise just how complicated a task it is to accomplish in real life. Neurons must fire to increase the tension in some muscles and decrease them in others, balance must be maintained, objects avoided , speed maintained and so on. If these actions were the result of a conscious deliberative process they would overwhelm the mind, instead subconscious subroutines take care of all the work and walking simply becomes an issue of command. Robotics engineers looking at the problem have termed it Moravec's Paradox.


The main lesson of thirty-five years of AI research is that the hard problems are easy and the easy problems are hard. The mental abilities of a four-year-old that we take for granted – recognizing a face, lifting a pencil, walking across a room, answering a question – in fact solve some of the hardest engineering problems ever conceived... As the new generation of intelligent devices appears, it will be the stock analysts and petrochemical engineers and parole board members who are in danger of being replaced by machines. The gardeners, receptionists, and cooks are secure in their jobs for decades to come.

Encoded in the large, highly evolved sensory and motor portions of the human brain is a billion years of experience about the nature of the world and how to survive in it. The deliberate process we call reasoning is, I believe, the thinnest veneer of human thought, effective only because it is supported by this much older and much more powerful, though usually unconscious, sensorimotor knowledge[Ed]. We are all prodigious olympians in perceptual and motor areas, so good that we make the difficult look easy. Abstract thought, though, is a new trick, perhaps less than 100 thousand years old. We have not yet mastered it. It is not all that intrinsically difficult; it just seems so when we do it.

Our conscious rationality rests upon a deep foundation of biocomputative processing of which were are largely unaware of. Now, most people instinctively grasp the fact that biologically automatic processes are involved in motor movements, but what needs to be recongised is that automatic processes are also involved in our perception and cognition which result in unconscious biases in our thinking. The influence of these biases are most marked at the level of System 1 thinking, in other words the thinking of the cognitive miser: the average man. These biases are not bugs but are features of the system, designed to ensure our long term biological survival in a primitive environment.  For instance, the preference for blue, amongst Europeans may be "hard coded" in our DNA as a result of evolutionary--or whatever else--selection. It's not a learned behaviour.

The point of all this is for people to recognise that we are inbuilt with biases and preferences which are not deliberately chosen but which are "hard wired" into our biocomputative architecture. Sometimes our preferences are not a choice, but are a feature of our innate biology and therefore intrinsic to what it means to be human.  Stereotyping, color association and  homophily are examples of human biases which may provide a foundation for thinking about human relations in a way which avoids the pernicious affects of Darwinianism which has so plagued the Right in the 20th Century.

Posted by The Social Pathologist at 10:40 am 14 comments: