Several commentators have raised objections to the study mentioned in the previous post claiming that it was methodologically flawed due to the inability to control for confounding variables, bias and so on. I will admit that the study does have some flaws but basically the conclusions are valid.

Firstly, the study involved 10,000 women and the data was collected by the CDC, good sample size and a non-partisan credible collection agency. Tick.

Secondly, the study didn't control for socio-economic and demographic variables. This would be a legitimate criticism is a particular community chosen for study was non representative of the group. However the sample group was meant to be representative of the entire U.S. age cohort. Therefore, many of the biases, would in reality cancel each other out to produce a picture of the "average". Whilst this does not give us an absolute guide to a particular persons behaviour it give us practical rules of thumb by which we understand the real world and navigate society and base our expectations. The race is not always to the swift nor the battle to the brave but its the way to bet. The "pure" risk of promiscuity is of academic interest only. We marry real people.

What we have here is statistical purists objecting to the application of the average to the particular. A complaint of limited relevance.

Thirdly, objections centered around the definition of stable marriage:
A stable marriage was defined as a woman over 30, who had been married for five or more years at the time of marriage. Basically who was excluded from the study was any woman less than 30 and any woman over 30 with less than 5 years of marriage. As their marriages were of indeterminate stability. Their data was excluded from the statistical analysis. This definition is reasonable as:

1) Most women want to be in a stable marriage by their 30's. The mean age of marriage in the U.S. when the study was done was 25, so this seems a reasonable end point.
2) A woman divorced before 30 was by this definition not in a stable marriage, I agree.
3) A 5 year definition of stability seems pretty lax, but I'd hate to see the figures if the standards were raised. Even with these lax standards the promiscuous can't make the grade.

However the study has a systemic bias. If a woman had multiple short flings in her youth but then entered a stable marriage she was included in the study. It's important to realise just how important this definition is. By keeping the age of stable marriage above thirty, the study gave the woman a chance to be wild whilst young and then monogamous. Example: A woman who had 12 partners prior to 24 and then found the "one" would still be considered as being in a stable relationship when she was thirty. It appears that there was systemic bias to minimise the effect of youth promiscuity in this study. The systemic bias of the study would have supported the common trope of the promiscuous college student settling down to be a good mother, yet even in a study that is designed in their favour they fail.

It appears that the Heritage Foundation wanted to give the promiscuous every chance to succeed in their relationships.

Also keep in mind that there are two aspects to being in a stable marriage, they are forming a stable marriage and then keeping a marriage. This is why the "sexually active but in not in a relationship" group were included. The presumption here being that women between 30-45 wants to enter a stable relationship. It appears a common sense assumption and it appears from the study that the promiscuous have problems with both. Whilst the relatively chaste seem to have better prospects.

Of course there are some women who don't want to get married and who are sexually active and these are likely to skew the stats. However, despite the "Girrrl Power" idolisation of Kim Catrall, nearly all women want a "Mr Big". The number wanting otherwise is likely to be small and insignificant. The methodology of the study is sound. 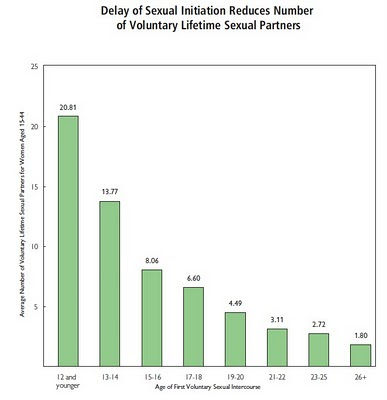 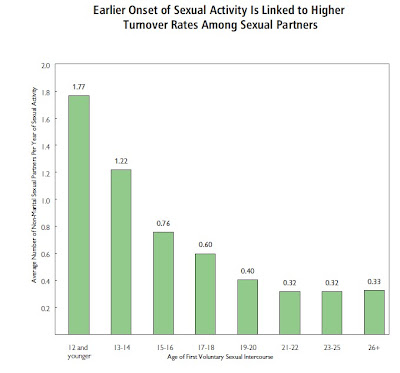 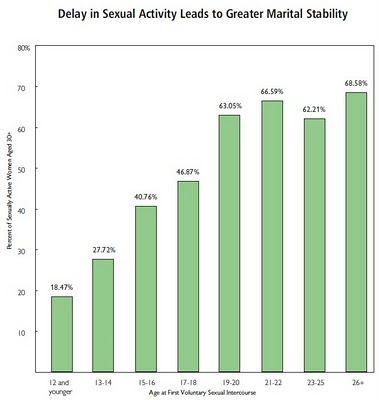 It appears that the turnover rate seems to stabilise 19-20 age group. Does pre-marital sex before 18 cause some problem with bonding? I'm not saying it does but it would be something worth further investigating. Does a permissive adolescence impair their ability to form long term mates? I'm not making a statement here, just wondering.
Posted by The Social Pathologist at 8:31 pm 20 comments: