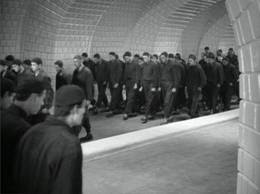 My first impression of America, upon landing in LA, was just how tired everyone looked. From first day of our visit to our last, this overall perception of worn out people was everywhere in the US. It was obvious that everyone was working quite hard, but it was also obvious that they had been working quite hard for a very, very long time.

What also surprised me is just how many older people were working in the “hamburger flipping” type of industries ( A phenomenon that is beginning to appear in Australia as well).   In Australia, and in my experience of Europe, these jobs are considered workforce “entry level jobs” and are still the province of younger people, whilst in the U.S., the majority of the service staff that I met were above the age of thirty. They were all working what I would consider anti-social hours and all of them looked worn out ..... and trapped.

The overall impression it gave me, was of a worn out society that was barely holding itself together. I must confess it shocked and saddened me. Everyone seemed overworked. Everyone also seemed grimly resolute to the task. It appeared to me, that to most Americans, this was the only way things could be.

One of the most interesting conversations I had was in the bowels of the Hoover dam. Whilst being taken through an access tunnel, our tour guide asked us we were all from. Two groups were from Australia and another from France. We got into a discussion about vacations and explained to him, that on average, Australians get four weeks paid leave a year. I think the French said that they got five. He clearly looked pained at our responses. He told us that he only got one week and that his employers were trying to take it away from him. He was clearly an intelligent man and wanted to travel but was unable to do so due to his work commitments. It dawned upon me at that time that perhaps one of the causes of American insularity is the simple fact that many Americans simply do not have time time to leave their country, trapped by the obligations to their employers.

Now in Australia, I see a lot of small businessmen who work just as hard and I have seen that look of work-weariness before. I know the toll that it places on human beings. My experience has taught me is that everyone seems to have a work threshold, that once crossed, becomes socially and personally destructive. A man is not only a means of production, but he is also meant to be a husband, father and a member of the community.  A healthy man balances all these duties, and healthy society gives him room to balance them. Men devoting all their times to work have no time to devote to the other obligations in their life.  Men working long hours become harsh and irritable, they make mistakes, they opt for quick snacks instead of proper meals, working hard for their families, they don’t ever spend time with their them, eventually finding themselves alienated from the ones they have devoted themselves to.

It appeared to me that whilst America had fully internalised the Protestant work ethic it had neglected any concept of the right to leisure. Labour laws,  in the end, are a reflection of society’s values. In America, it appeared that leisure was perceived as either an opportunity cost amongst the go getters, or an frivolous luxury amongst the miserly. And amongst those who would like to take some time off for a rest, it appeared that American culture offered them no legitimacy. It was a society that seem geared toward the primacy of work and production and you were either with the program or you were not.
Posted by The Social Pathologist at 11:51 pm 23 comments:

What I Saw in America.

My family and I have recently completed a nearly four week holiday in the United States. Over the next few posts I hope to write about the impressions that the country left on me; not all of them positive. I found it difficult to articulate these impressions for a while and upon return to Australia, picked up G.K Chesterton’s book on his experience of the U.S. He visited it in the 1920‘s and 30‘s,  and surprisingly, I felt that many of his observations still hold true to today.  Whilst he was very polite in his writings about the U.S., I could not help but form the opinion that the country disquieted him, seeing in it something that was toxic to the ideas of Christendom.

Americans, I have found, find it very difficult to take criticism of their country objectively and tend to impute malice towards the critic. And it is true that there are a lot of malevolent critics of America. I am not. Sometimes its very difficult to see the problems from “inside” and that what’s needed is an outside view, and that’s what I’m trying to provide. I am convinced that one of the big problems of the U.S is it’s cultural insularity. Roosh V is on the money when he urges people to travel and I think it is its very important that young American men of the Right ( who will be its future advocaes) get out and see the world. Not so much as to remake the U.S in the image of another country, more to be able to compare how other people live; in many instances better than in the U.S.

Nearly all of the Americans that we met appeared to be fundamentally good and decent persons, and in many ways, better than a lot of the Europeans and Australians. If I had to generalise however, I would say that the higher up the food chain an American was, the less I tended to like him. Prole America in its failures seemed more human that corporate America in its success. What distressed me the most however, was the erosive destruction of the American people by an economic system that seems to be literally grinding them into the dust.  After visiting the U.S. the “we are the 99%” movement is very easy to understand.

As a result of this trip I feel that I understand Roissy a lot a better, especially with regard to American women; they really are different compared to other women of the world. My appreciation of Ferdinand Bardamu has also grown, as I feel he is quite accurate in his critiques of American society.
Posted by The Social Pathologist at 12:37 am 22 comments: