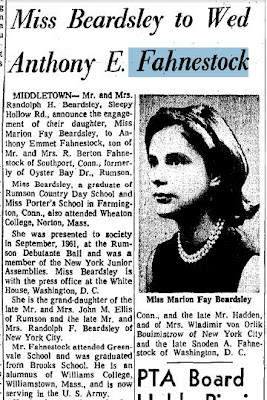 Fahnestock's response to his fiance's confession was to go silent and go to bed. Alford was staying over at his place, however it was the early 60's, and the custom was for them to sleep in separate rooms. During the night, Fahnestock, who had never pressed her for sex, without saying a word, came into her bedroom;


Saying nothing, he yanked back the covers, climbed into my bed, and, without a word, initiated our first sexual encounter. I was so desperate to keep him I didn't resist.  It was forceful and clumsy-and I had no idea how to behave [Ed: ?], neither how to express my sorrow at hurting him nor how to offer my love to heal the pain. He left the bedroom as abruptly as he had entered it...... It was sex but there was no love.

Fahnestock decided to go ahead with marriage on the condition that her affair with Kennedy was never mentioned or that his name was never bought up in conversation. She had to bury her previously life in order to get married. But it is interesting to see her psychological reasons for agreeing to marry Fahnestock on those terms.


I felt relieved as he pulled back on the road. I took what he'd said to mean that if I obeyed him, then the wedding would go ahead. There would be no scandal, no disgrace, no tearful explanations of why the wedding had been cancelled.

She was scared about her social standing, not the harm she had done to Fahnestock.


For a long time I'd like to think that he was protecting me by demanding my silence, but I've come to realise that he was only protecting himself and his own ego. My revelation had embarrassed him. He must have hated the fact that the President had claimed me before he did. He must have felt humiliated that I continued to see the President after we met. He must have felt he would never measure to someone so charismatic and powerful. Perhaps he event felt I was mocking him.


If our roles had been reversed, I know I would not be so forgiving.

Her own attempts to understand Fahnestock are more an reflection of her own solipsistic though patterns than his. I suppose it never occurred to her that he loved her passionately and that her affair was a betrayal of his love. The woman who he had intended to pledge the rest of his life to was screwing another man during the most emotionally intense period of any relationship.  Indeed, the tone of his interrogation of her in the previous post suggests that he was concerned more about when the affair was happening than the fact that she was a virgin. He lapsed into silence only after she told him that she was still sleeping with the President whilst they were engaged.

I imagine that Fahnestock was a normal guy of the times with normal young male desires. The fact that he didn't press her for sex means to me that he was probably living by some chivalric code and trying to be some sort of honourable man. He probably "snapped" the night when he found out the affair, but it's hard to wipe away an upbringing overnight, and  I can only speculate as to why he decided to marry her after her became aware of her alter life.  When I was young and I was strong in the way of romantic beta, and putting myself in his position, I imagine that the reason he decided not to call off the marriage was,  despite the betrayal, because he loved her.  He knew what the consequences would be if he called off the marriage; her reputation would suffer more by any hushed revelation to close friends and family than his.  In other words, Fahnestock had very little to lose by calling the marriage off  and everything to gain, except losing her. So the only explanation for his actions which makes sense to me is that he went through with the marriage for her benefit. Fahnestock, from her description of him in the book, seemed a man of both decision and action, and I have no doubt that he would have dumped her if he had decided on that course.

And yet, wanting to forget is not the same as being able to.


Tony, for his part, was completing his Army tour of duty, which kept us apart for a big chunk of time before the wedding. But even when we were together, as much as I might try to deny it, the tenor of our relationship was different  We had always been light and playful with each other, as if we didn't have a care in the world. Now I felt a creeping unease with him, as if he was constantly scrutinizing me and finding me wanting.


Tony was never able to trust me from completely that day, and for good reason. Nothing could erase the depth of his hurt. He carried that baggage for our entire marriage. It was forever woven into the emotional fabric of our lives together and I could sense it. The anger and jealousy never completely disappeared.

Alford believes the Fahnestock's insistence that the subject of JFK never be raised was the cause of their subsequent marital disharmony. She feels that had they had the chance to "talk about it" and "seek therapy" and bought the secret out into the open, things may have been different.  In one of her most callous passages she writes:


If we could put this behind us, perhaps years later we could marvel over--even laugh about--the time when Tony's wife had an affair with the President of the United States when she was very, very young.
[Ed: And engaged to Tony]

How do you laugh about infidelity? How do you laugh about betrayed love? Initially, she went along with Fahnestock's demands and describes their early marriage as reasonably happy, however later on, conditioned by modern psychobabble, somehow she suggests that Fahnestock's response to her infidelity was pathologically abnormal. In this woman, the whole moral calculus is inverted. Contrition, which is a precondition of forgiveness, consists in recogonising the wrongness of the act. Nowhere do I get the impression that she regrets the affair. She didn't want Fahnestock's forgiveness, she wanted his happy acceptance of her infidelity which she equated with forgiveness. She perhaps wouldn't have felt the same way if she loved Fahnestock in the same way that he loved her. His love was symbiotic, her love was parasitic.


In the early stages of their marriage, Alford did try to be a good wife, however it wasn't only Fahnestock who could not forget. She too seemed never able to shake off the memories her past; of her "five minutes of alpha."

(Photo of the wedding can be seen here. Scroll down.)

(to be continued)
Posted by The Social Pathologist at 12:01 am 13 comments: